The initiative, headed by former L.A. mayor Richard Riordan, will ask supporters to make provisions in their trusts or wills for the Catholic Education Foundation.

First grader Martin Aguayo, center, looks up at the board during class at Immaculate Conception School in Los Angeles. It is one of the schools expected to benefit from the archdiocese’s Catholic Education Foundation. (Wally Skalij, Los Angeles Times )

September 26, 2011 - Dwindling enrollment and other challenges have decimated urban Catholic schools nationwide, but a high-profile initiative to raise $100 million in tuition assistance may allow thousands of children to continue attending schools in the Los Angeles Archdiocese and save those schools from extinction.

The initiative, headed by former Los Angeles mayor Richard Riordan, will ask supporters to make provisions in their trusts or wills for the archdiocese's Catholic Education Foundation, which already awards thousands of grants annually to needy students. Riordan was the founding president of the foundation in 1987 and is a longtime supporter of education-related causes.

It is estimated that the two-year campaign will aid an additional 5,000 students annually, said Kathleen Anderson, the foundation's executive director.

We have so many kids that need to be supported in our Catholic schools, and they don't have the financial means because their parents are living below the poverty line," Anderson said.

The foundation awarded 7,300 grants for the current academic year, but there are 9,000 students on waiting lists, Anderson said.

The new initiative will help schools like Immaculate Conception Catholic School, a storied 93-year-old institution in the low-income Westlake neighborhood west of downtown, where paying for a parochial education is a struggle for many.

About 238 families at the school applied for tuition assistance, but only about half received grants, even though the others also met income qualifications, Principal Mary Ann Murphy said. Annual tuition is $2,820. The school reduces the amount for some low-income students and allows some parents to provide in-kind services in lieu of tuition.

"If we didn't have the support of the foundation, I'm not sure we would be able to stay in operation," Murphy said. "Students in Pico Westlake are very low-income, with parents that are working two or three jobs to afford tuition, which can be 10[%] to 15% of their overall income."

Catholic schools nationally are facing declining enrollment, with shifting demographics and parents' inability to afford tuition among a number of factors. Over the last 10 years, Catholic school enrollment in the Los Angeles archdiocese has fallen 20% to about 79,400 from nearly 100,000, according to a recent study by Loyola Marymount University.

Los Angeles has largely managed to avoid the Catholic school closings that have beset some other cities, particularly on the East Coast. And, bucking a public school trend to shorten the academic calendar, the archdiocese this spring moved to lengthen the school year by 20 days. After a parental backlash, however, officials decided to leave that decision up to local school administrators.

The seed for the current fundraising campaign was a gift of $11.3 million from the trust of the late oilman Frank R. Seaver and his wife, Blanche, local philanthropists who, though not Catholic, supported the values-based schooling that underpins Catholic education, officials said. 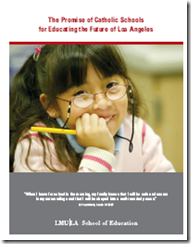 There has been a recent push, especially in Los Angeles, to make the case that Catholic schools provide a higher quality of education for low-income and minority students. The Loyola Marymount study found that students at Catholic schools in inner-city Los Angeles outperformed their peers on nationwide standardized tests, had higher graduation rates than public school students and went on to college at a higher rate than the national average.

Catholic leaders are using such findings in marketing initiatives like the Catholic Schools Consortium, designed to turn around nine archdiocese schools — including Immaculate Conception — that were in jeopardy of closing. After nearly three years, overall enrollment at the schools is up nearly 20%, said Steve Bumbaugh, executive director of the nonprofit Specialty Family Foundation, which funds the consortium.

"We can tell these parents that if they can manage to put their [child] in a Catholic school from kindergarten on, we can guarantee with a 98% certainty they will graduate from high school and go to college," Bumbaugh said. "That kind of crystal-clear message about the straight line from poverty to the middle-class hasn't been communicated effectively."

smf: Obviously the LMU study – coming from the Center for Catholic Education at a Catholic university - is not exactly non-partisan. And 4LAKids recognizes Mayor Riordan's support for all schools: traditional (there is one named for him in Highland Park), charter and parochial is to be congratulated – it is always about the children, not the delivery vehicle. The same can be said for our current mayor – whose advocacy for public education and charter schools is well publicized – his sending of his children to Catholic Schools not so much.