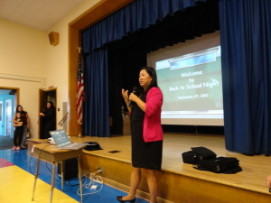 Principal Susan Kim explains to Valley View parents that they did well, but got labeled 'PI' - CreditMike Szymanski

Sept. 30, 2011 - 10:44am -- It’s her first partial year as principal at Valley View Elementary School, and the school test numbers came in well this year.

Three subgroups that failed last year, including the “socio-economically disadvantaged,” scored in the proficient range, and the entire school got among the highest Academic Performance Index point increases in the East Valley region.

Yet, Principal Susan Kim was forced to send out letters Wednesday that explained to parents that this tiny school in the Cahuenga Pass was now labeled a “Program Improvement” school under the federal No Child Left Behind Act—and the letter was to let parents know that they could transfer to another school if they wanted to, and that the Los Angeles Unified School District would pay for their transportation.

The principal gave the bad news at Back-to-School night on Tuesday and sent the official LAUSD letter out on Wednesday.

“I’ll be honest; it’s a little disappointing, but we are on our way up, and we will make sure that we get to proficient levels in all our categories,” Kim said.

A school gets labeled “Program Improvement” if one of the subgroup categories falls below a set proficiency target. At Valley View there are 17 identified subgroups, distinguished by ethnic background, race, English-speaking, special needs or economic needs.

For the second year in a row at Valley View—which has 250 students and is one of the smallest schools in the LAUSD system—the 54 Latino and Hispanic students did not score high enough in the English-Language Arts test. They scored at 51 percent and needed to get to 67.6 percent.

Now, the school has a label on it that is sometimes difficult to get out of, but Valley View—although situated in the wealthy neighborhoods of the Hollywood Hills and has a population of mostly Studio City and Toluca Lake residents—does get Title 1 money because it has enough socioeconomically disadvantaged students from other parts of the city who choose to be there. That $4,000 in Title 1 money will be used to help with programs to target the students who need to improve their test scores, Kim said.

Some of the parents are disappointed because the label tarnishes their secret little gem of a school.

“This is very distressing to me, because when I looked at schools for my daughter, I specifically did not look at schools labeled ‘Program Improvement’ and I would have overlooked this school, which I love,” said Bonnie George, who is now the co-president of the school's PTA. “I know that we will be fine next year.”

Kelly Cole, the other co-president of the PTA, also purposefully picked Valley View for her son after doing a lot of research on local schools, in different districts and both public and private. She said, “Statistics never tell the whole picture. It’s obvious after you spend 10 minutes at the school that you see how active and involved the parents and teachers are with the students, and how exceptional a school it is.”

The school Academic Performance Index for the past five years increased 13 percent:

Halfway through last year, Harold Klein, who was the principal for the past six years at the school, was forced to resign, and Kim took over in January.

Klein said, “It is a shame. These test scores do not show how hard these teachers worked to improve the scores overall. For a whole school to be labeled like this for one category just seems silly.”

It’s a problem echoed at other schools. North Hollywood Senior High Principal Randall Delling has been protesting the unfair federal restrictions practically since they were implemented. His school, while winning national math and science honors, has had the “PI” label on it for three years. One of the three categories that hasn’t improved in his school is the English test for the students labeled “English Learners.”

At Walter Reed Middle School in Studio City, Principal Donna Tobin did not want to take away from the success of her school hitting 828—higher than their goal of 821.

“We are thrilled with the score,” Tobin said. “The teachers, staff, parents and students all worked so hard, and we did better than what we hoped to do.”

She added, “But no, we’re not out of the waters with Program Improvement.”

For the fifth year, Reed was considered a “PI” school, and last year nine of their 33 categories did not make proficient marks. Those categories included math scores for American Indian/Alaskan Natives and math scores for socio-economically disadvantaged students; and both math and English test scores for “Students with Disabilities,” English learners and Hispanic/Latino students.

At Valley View, Kim said she has a plan to tutor students that may need help with testing, and she said she wanted to start a club with those who scored a perfect 600 on the math and English tests—and they had a surprising lot of them. “I want to see if those students will help their fellow students out,” she said.