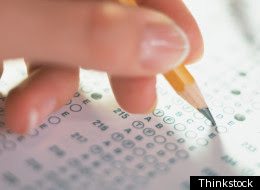 Posted: 9/28/11 02:34 PM ET  - A second cheating scandal has hit the Los Angeles Unified School District, this time at one of the district's most promising campuses.

Virgil Middle School, located in Koreatown, is the latest LAUSD school to be penalized for misconduct or cheating by a teacher.

Here's what an unnamed algebra teacher is accused of, according to the Los Angeles Times:

Officials have accused her of scanning the test into her computer, then preparing a review sheet for students based on actual test questions, according to documents submitted to the California Department of Education.

The teacher decided to retire rather than be dismissed from her position.

The Academic Performance Index (API) of Virgil Middle School has been steadily rising in the past few years. In 2008, it scored 641, and its score this year would have been 714. The statewide performance goal for API scores is 800 out of a possible 1000.

Schools across the nation are grappling with the pressure to raise test scores and improve standards, and several school administrators are responding by cheating.

Earlier this month, test scores from both the LAUSD's Short Avenue Elementary School and Animo Leadership Charter High School were thrown out when several irregularities were found on completed tests. At Animo, there were too many suspicious erasures, reports the Daily Breeze. At Short, the test booklet of a student who left several answers blank was found to be completed for her, according to the Los Angeles Times. Both of the schools' Academic Performance Index scores were withheld as a result. California Watch has more on the fallout for these schools:

In New York, a decision to conduct "erasure analysis" on completed scantrons (despite the lack of funding for this investigation) has revealed at least 64 possible problems at 62 different schools, reports the New York Times earlier this week.

●●smf’s 2¢: California Watch points out that

Last year, Short Avenue's Academic Performance Index ranking was 848, well above the state target of 800. Animo Leadership (the Green Dot Charter school located in the Lennox School District) would have scored an API near 800 this year if the allegations hadn't caused its results to be thrown out. Both schools serve a mix of low-income and minority students. http://bit.ly/rgpK1D

All three of these schools are – on the face of it – successful programs – as were the shuttered Crescendo schools. All were on an upward performance curve - driven by expectations, NCLB, AYP, and ‘value-added’ pressure on teachers to do better on test scores.

Another LA school suspected of cheating

The Los Angeles Times ( http://lat.ms/nmUjvn) says Koreatown's Virgil Middle School could lose a $3.5 million state grant because of cheating allegations against a teacher who is now retired. Documents submitted to the California Department of ...

The Los Angeles Times says Koreatown's Virgil Middle School could lose a $3.5 million state grant because of cheating allegations against a teacher who is now retired. Documents submitted to the California Department of Education allege the Algebra ...