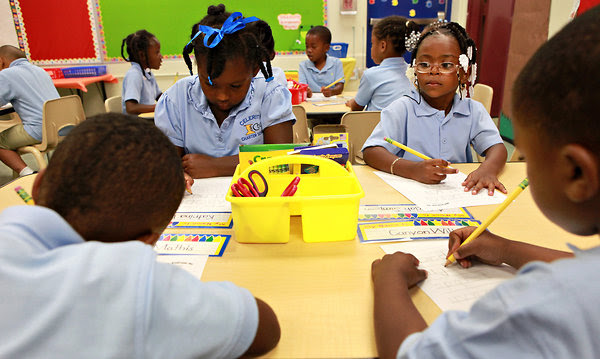 Published: September 23, 2011  - COMPTON, Calif. — The promise sounded alluring and simple: if enough parents signed a petition, their children’s struggling school would be shut down and replaced with a charter school.

So, using a new state law known as the parent trigger, organizers at an underperforming school here in Compton collected hundreds of signatures from parents who said they were fed up. Parents were eager, they said, to turn it into a charter school, where students would spend more time in class with a staff of new teachers.

After months of legal battles, the status of that petition remains tied up in court. But in the meantime, a new charter school has opened just blocks away from the struggling school and parents at more than a dozen other schools in California are hoping to take advantage of the trigger law, demanding that their schools radically improve.

In essence, the law creates a parents’ union, which advocates say will provide powerful and needed counterweight to teachers’ unions and district bureaucracies. If 51 percent of parents in a persistently failing school sign a petition, they can force the school to change into a charter, close it entirely or replace the principal and teachers.

Similar legislation has passed in Texas, Ohio and Connecticut and is being considered in nearly a dozen more states — but California, the earliest adopter, is farthest along. And with opponents and skeptics arguing that parents lack the expertise to make important policy decisions better left to career educators, the Compton case is a prime example of how challenging it can be to create change.

“We’ve been waiting for this for a very long time,” said Gregoria Gonzalez, a mother of two girls in Lynwood, Calif., who has been involved in her local school for years. “We are very tired of being told if we want to help we simply should stand outside watching recess or making something for a bake sale.”

As Ms. Gonzalez spoke at a protest rally last week, another mother held up a sign proclaiming, “My child still cannot read.” One little girl gripped her own poster that said “the power is with the parents.”

But Compton’s ordeal illustrated how difficult claiming that power can be and how bitter the battles can become. When parents began signing petitions last fall to replace McKinley Elementary School, several Latino parents said teachers had warned them that they could be deported. Other parents said that teachers insisted the children were simply not trying hard enough to learn. Teachers, for their part, complained that parents had been coerced into signing the petition and that many did not know what they were signing.

Compton Unified School District officials challenged the petitions in court, which ruled that because the signatures were not dated, the petition was not valid. While organizers appealed that decision in court, the administrators of the charter school, Celerity Sirius, looked for other ways to open a new campus and secured approval for one at a former church and at a campus closed because of low enrollment.

Still, by the time school began this month, only about a third of the parents who initially signed the petition ended up enrolling their children in the charter school. While there are children who come from 40 miles away, only a fraction of the students are from Compton.

“Some people just didn’t want to deal with the hassle of having to take their kid somewhere else,” said Marlene Romero, a parent who had collected dozens of signatures last fall. “They wanted the change to happen at their own school.”

While Ms. Romero said she had noticed some improvements at McKinley, she never doubted her decision to pull her children out of the school and into the charter. Now, she said, she has every teacher’s cellphone number and is confident that they will give her children extra help whenever they need it.

Ben Austin, the executive director of Parent Revolution, the group that organizes the parents’ unions, said that many of the parents who signed the petition had since moved away and organizers had simply lost touch with others. The group was not involved with the recruitment process for the charter school. Still, Mr. Austin acknowledges there were weaknesses in the Compton effort.

“We came in with a pre-packaged solution of a charter school and didn’t have enough of a deep buy-in from enough parents, and we didn’t develop enough leadership,” Mr. Austin said.

This year, he said, the organization will rely on the local parents’ unions to ask for the specific changes they want. In some cases, it may be as simple as more consultation from school leaders.

“Parents really have to educate themselves, and we all have to know it takes a whole lot more than a signature to solve the problems of the school,” he said. “But parents are surely able to do this, and they have to do this. It’s the best hope we have for change.”

There is strong resistance to this whole notion from teachers’ unions, which have long relied on steadfast support from parents against budget cuts and other changes. In many ways, the parent trigger can directly undermine their efforts.

At a meeting of the American Federation of Teachers this summer, the lobbyist for the Connecticut chapter delivered a presentation outlining the ways that they were able to weaken the law after they unsuccessfully tried to kill it. The presentation made it clear that the union saw the bill as a threat.

Randi Weingarten, the union’s national president, said that the problem with the parent trigger law in California is that it encourages parents to focus on closing a troubled school.

“It basically says there is nothing else a school system can do but say, ‘We give up on this school,’ ” Ms. Weingarten said. “Ultimately, parents should be involved in fixing the school, and nobody should wait until after it fails to give them a voice.”

Yvette Hughes, a parent of two teenagers in Carson, Calif., said she had complained about her local schools for years but there had been little improvement. Instead, she said, the school has churned through principals and teachers.

“We’re a middle-class neighborhood where many parents went to college, and we know what we should be getting,” Ms. Hughes said. “But we get more concerned as more time goes by. The future is looking very bleak unless we change things and stop becoming a revolving door for educators.”

If this yellow journalism was any more of a shill piece for Ben Austin, it could be considered a public relations piece.

Let's be clear, Parent Revolution is a proxy group for the California Charter Schools Association with no goal other than to privatize public schools and grow charter market share. One of their biggest donors, Eli Broad, stated so on his 990 Form contribution to Parent Revolution:

The corporate charter trigger law does nothing to improve public education, but is a overt move by the lucrative charter-voucher industry to cynically divert the frustrations of parents into providing wealthy charter executives a real estate give away bonanza. Perhaps the author of this piece should have mentioned that Austin broke several laws when he was getting his trigger legislation fashioned so that well paid industry groups like his could take advantage of people.