Sept 16, 2011 - SAN FRANCISCO (AP) – California schools are turning away middle and high school students who have not received the whooping cough vaccine as required under a law passed last year after a historic spike in cases of the potentially fatal disease. 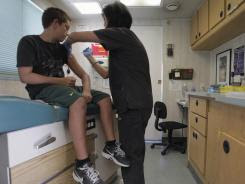 The law passed in October initially required all students entering grades seven through 12 to get vaccinated by the start of the 2011-2012 school year. Lawmakers passed a 30-day extension this summer as districts worried many students wouldn't meet the deadline.

Under California law, students also can still attend if their parents file a form saying they oppose vaccines.

No statewide estimates of the number of students turned away is available because districts are not required to report their final vaccination tally until December, state education officials said.

But anecdotal reports from individual districts indicate the percentage of students meeting the requirement varied widely.

"We've done a tremendous amount of outreach with the schools trying to let them know," said Linda Davis-Alldritt, the school nurse consultant for the education department.

Davis-Alldritt said she had heard from districts reporting anywhere from half to nearly all students getting the vaccination.

District spokeswoman Heidi Anderson said the district estimates about 2,000 students, or 10 percent of the student body, are still unvaccinated. The district held a free vaccination clinic at its offices Thursday and was providing shots at individual schools on Friday.

District officials were optimistic that most students would be able to return to class soon.

"We're getting down to it," Anderson said.

The Sacramento Bee reported Friday that some Northern California districts were defying the law by allowing unvaccinated students to come to school. Schools in California lose money for each absence.

"We will not withhold education from our students," Folsom Cordova Superintendent Debbie Bettencourt said.

At the Natomas Unified School District, Interim Superintendent Walt Hanline told the newspaper that about 1,000 students had not complied. Instead of being sent home, those students were receiving separate instruction in the gym.

State education officials said allowing unvaccinated students on school premises at all broke state law, but that the education department had no power to sanction defiant districts.

Allowing unvaccinated students to come to school put the students themselves and others exempted from the vaccine for medical or personal reasons at risk, Davis-Alldritt said.

"The legislation is pretty clear they have to be excluded. And excluding doesn't mean housing them in the gym ," she said.

Updated: 09/19/2011 05:58:23 PM PDT - SACRAMENTO, Calif.—Lawmakers say they will consider tougher requirements for schools that have been defying state law by letting students who cannot prove they have had the whooping cough vaccine remain on campus.

Republican Assemblyman Nathan Fletcher of San Diego was one of the co-authors behind the bill requiring all students between grades seven and 12 to get vaccinated against the disease by the start of the 2011-12 school year.

He said he will consider introducing legislation next year that addresses the potential public health risks of allowing unvaccinated students onto school campuses.

"I certainly envisioned a situation where schools would comply with the law," he said. "If there is still a risk and a threat to the children, we will take a look at it."

The Legislature gave school districts 30 days beyond the start of the school year to make sure all students were vaccinated or had a formal exemption filed by their parents or guardians. Under the law, students who had neither were not to be allowed on campus.

Some districts that started classes in mid-August began hitting the 30-day mark over the past week. Some are allowing unvaccinated students to attend classes as usual, while others are separating them from the rest of the population in gyms and other areas.

"We don't need a gym," Fletcher said. "We need kids to get their vaccination."

California had more than 9,000 whooping cough cases last year, including  10 infants who died because they were too young to receive the vaccination.

Students being allowed to attend school without the inoculation put the rest of the community at risk, said state Assemblyman Dan Logue, R-Chico, vice chairman of his chamber's health committee.

"Due to the health risk, we might look at some type of legislation to encourage schools," he said. "The bottom line is we need to find more teeth than the mandate. What's happening right now should not be happening."

On Monday, between 70 and 80 students at Inderkum High School in Sacramento's Natomas neighborhood were sequestered in a gym while vaccination shots were being given in an adjacent gym. High school principal George Tapanes said a majority of those students had received the vaccination but were lacking the forms to prove it.

"So it's more of a paperwork nightmare than there are a lot of kids out there without vaccinations," he said.

District superintendent Walt Hanline, who made the decision to allow unvaccinated students on campus, said the law forced school officials to make a difficult choice.

"The state law said I couldn't have these children on campus, but the state law also said I have to educate children. I could put them on the streets or have them in a safe environment," he said. "I think I'm still following the spirit of the law, but that's in the eye of the beholder."

Roxana Huaman, a 16-year-old junior at Inderkum, said she didn't like the idea of unvaccinated students mingling on campus and potentially spreading the disease.

"I feel like that's not right. I wouldn't want to get sick and miss class that way," she said.

Natomas Unified School District officials say 412 of its 4,051 seventh- through 12th-grade students had yet to be vaccinated by Monday afternoon.

The vaccine is a preventive medicine against tetanus, diphtheria and pertussis, another name for whooping cough. The results of a study from Marin County that were presented Monday found the vaccine falters after about three years, lending support to those who advocate another round for middle and high school students.

The bacterial disease starts like a cold but develops into prolonged and severe coughing that can last for weeks.

The mandate for California schools was necessary to prevent students from missing weeks of school if they happened to catch the disease, said Dr. Gilberto Chavez, deputy director at the California Department of Public Health's Center for Infectious Diseases.

Tina Jung, a spokeswoman for the state Department of Education, said schools could lose their federal attendance-based funding for the students who had not been vaccinated but said the potential penalties are still being reviewed.

"Our job is not to penalize schools. Our job is to help schools educate children," she said. "Right now, we're still gathering information and still don't know the effect of the potential loss of funding."