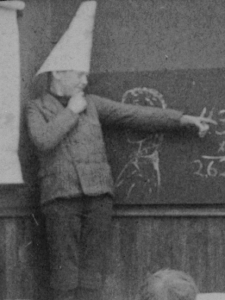 JULY 11, 2011 - In California, all good ideas for school reform seem to end up in the corner wearing a dunce cap.

Back on May 3, I reported on promising development in state Assembly Bill 18, a proposal by Assemblywoman Julia Brownley (D-Santa Monica) to shift from school funding formulas full of political pork and earmarks to deregulation and block grants.  For all his talk of returning funding decision making back to the local level, Gov. Jerry Brown has apparently caved in to union interests and allowed the union-run state legislature to kill AB 18.

Columnist Dan Walters reported that Brownley has put AB 18 on indefinite hold after the teachers and school-employee unions exerted their influence on the proposal to shift at least $7.5 billion of the state’s $35 billion budget for public schools into a block grant.

A block grant is a pot of money without political mandates or special categories of employees that require funding.  In other words, a block grant is a potential antidote to political pork and earmarks.  It returns funding decisions to the local level and makes them more transparent to public scrutiny.

The impartial State Legislative Analyst’s Office has called “broken” the current system of  “categorical funding.” Categorical funding is a term meaning the mandating of funding for certain non-core teacher jobs, such as bus drivers, music teachers, administrative aids, etc.  Stated differently, AB 18 would not affect funding for any core teachers but would only affect ancillary support staff.

The California Teacher’s Association (CTA) pushed for putting AB 18 on ice even though Gov. Brown and Assemblywoman Brownley covertly maneuvered an 11:59 p.m. rider to the recently approved state budget that mandates no core teacher layoffs.  The unions have solidified their hold on the State Capital, despite the recommendations of the Legislative Analyst’s Office and other good government recommendations to reform the “categorical” funding system for public schools.

Neither did Gov. Brown issue any statement in opposition to this move or exercise his line-item veto powers.