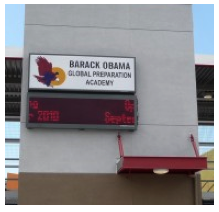 07.11.2011 - It is smoking hot in South Los Angeles.  Unfortunately, it is not the weather.  It is the parents, teachers, and community members who are enraged over the recent removal of Principal Veronique Wills at Barack Obama Global Preparatory Academy on 46th and Western Ave; and the Los Angeles Unified School District’s (LAUSD) calculated move to hinder community involvement  in the decision making process of its local schools as part of its reform efforts.

When I say “smoking mad”, the community is at odds with LAUSD and its handling of schools in the area and think that socio-economic status have a lot to do with it.

The community is blaming LAUSD Superintendent, John Deasy and Local District 7, George McKenna of circumventing plans and processes and under resourcing South Los Angeles public schools intentionally to turn them over to independent charter school operators.

The community is not holding down.  It is barging forward with a full force assault on the District and its leadership.

First, let’s start with Barack Obama Global Preparatory Academy.  From inception to the opening of its doors in September 2010, the school has been a hot bed of controversy.  Through eminent domain, hundreds of local homeowners were displaced so that it could be built to relieve overcrowding from nearby Horace Mann, John Muir, and Foshay middle schools.

There was an attempt from powers-that-be to push Barack Obama into Public School Choice, which would have given charter school operators and district stakeholders control over the campus.  The South Los Angeles community through its own grassroots efforts thwarted this attempt by developing a school management plan that was accepted and approved by the LAUSD Board.

Principal Veronique Wills, who was appointed by George McKenna’s predecessor, had been leading the school and engaging the community.  For some reason, her ousting from Barack Obama has many in the community screaming foul play and demanding her return as principal.

The community is making a strong case for Ms. Wills.  From the beginning of the school year, LAUSD failed to provide the necessary operating capital for this new school leaving it gravely under resourced.  The result of their sluggish funding efforts caused students to go without textbooks for two months; teachers to double as custodians; and parents and community members to fill resource gaps.

It is quite evident that the approved plan by LAUSD didn’t come with money for implementation.  Therefore, Ms. Wills can’t be held accountable for the District’s failure.

South Los Angeles community member Koyaki  Kwa Jitahidi shared,   “If the Superintendent genuinely believed that Ms. Wills was struggling as principal of Obama Academy, she deserved the opportunity to have at least another year, with at least the basic resources at her disposal, to improve.

However, her transfer after a mere 10 months, when she seemed to fight so hard to bring help to the school, begs one to question if there is another agenda at play. Is Obama being prepped to become a charter school? One can only speculate at this point.”

In addition to the return of Ms. Wills to Barack Obama and Mr. Jitahidi’s questioning of LAUSD’s motives, the South Los Angeles community is arduously requesting LAUSD to reinstate the stakeholder vote for Public School Choice and its usage for all other key LAUSD reform efforts.

There is an underpinning notion that LAUSD is reorganizing to hijack South Los Angeles public schools for charter school conversion and pilot schools.  Removing the stakeholder vote will make it easy for LAUSD to move towards centralized leadership and decrease community involved decision making.

One thing is for sure, South Los Angeles supporters of Principal Wills and reinstating the Public Choice stakeholder vote are not ready to cool down.  They are inviting the community and public officials to join them in solidarity at the LAUSD School Board meeting on July 12, 2011 at 1 pm to address these matters.

(Janet Denise Ganaway-Kelly offers more than a decade of accomplishments in the housing and nonprofit sector. Janet brings valuable insight in the areas of community and economic development. Additionally, she brings knowledge regarding the leadership and management challenges faced by large and small nonprofits that are struggling or growing organizations. She blogs at  jdkellyenterprises.org ) -cw