LA’s DEVELOPERS ARE ABOVE THE LAW + smf’s 2c

- Only in LA can a developer come to town with a $20 Billion budget, go to work on a construction campaign that impacts literally every neighborhood in the city, and not take responsibility for traffic mitigation, pedestrian and cyclist access, ADA compliance, roadway improvements, signalization enhancements, or simply adhering to LA’s municipal code.

This cavalier behavior is the work of the LAUSD, they’re LA’s largest developer, [link] and they are above the law.

When the LAUSD’s building program gets implemented in a neighborhood, it doesn’t come with the expected community benefits that would demonstrate a partnership, it comes with an expectation that the local municipal authority will take responsibility for any street improvements and traffic mitigation.

The LAUSD spent $228 million on Central Los Angeles High School #9, [link] aka the Visual and Performing Arts High School, and failed to deliver an ADA accessible school. The City of LA was expected to deliver the improvements that would support and encourage children as they walked and bicycled to school.

This isn’t the exception, it’s the rule, and the recent roster of newly constructed LAUSD schools that are on LA’s Safe Routes to School project list demonstrates LAUSD’s shortcomings when it comes to connecting with the community.

Simply put, if the LAUSD played by the same rules as the residents, they would build to code, they would include community benefits, and they would improve local streets to mitigate traffic and to support the kids who walk and bicycle to school. But they don’t because they are above the law.

Not to be outdone, the LA County Metropolitan Transit Authority (METRO), owner of massive amounts of property including the land surrounding more than 70 transit hubs, is developing mixed-use Transit Oriented Development (TOD) projects such as Hollywood’s W Hotel & Residences and the Westlake/MacArthur Park development.

When the ribbon was cut, the truth was revealed, LA’s Metro is another developer that operates as if it is above the law, violating LA’s municipal code, ignoring community benefit obligations, and creating traffic issues that took the life of a pedestrian in a crosswalk within the first few weeks of operation.

Not to be outdone, LA’s Community Redevelopment Agency (CRA) is technically part of the City Family yet it operates independently, a privilege that comes from having a dedicated and protected revenue stream. The CRA uses incremental tax revenue to develop “blighted” neighborhoods, a designation that was almost applied to the entire city of LA. It does this with the bull-in-a-china-shop behavior that locals have come to expect from the CRA’s well-funded development partners. Land is condemned and seized using the unique “I can do better than you!” interpretation of eminent domain, and then the notion of “public use” is twisted and the public gets used, literally.

The CRA is consistent with the Metro and the LAUSD in its arrogant approach to development and it also violates municipal code, ignores its community benefits obligation, and develops property as if it is above the law. Based on results, it is.

Rounding out the slate of mega-developers is the City of Los Angeles itself. One would think that of all developers, the City of LA could be counted on to develop its projects with a strict adherence to LA’s municipal code but that’s not the case.

LA has several building campaigns in different states of completion, and they include libraries, fire stations, and police stations. Funded with public money, these projects are built with an admirable goal of “on time and under budget” but with disregard for the third commitment, “up to code.”

Funded projects have a momentum that allows them to proceed without the traditional obligations of community benefit, of accessibility and for connectivity, and of community oversight.

In the process of defending local residents of the East Hollywood [link] neighborhood who were being cited by Building & Safety for over-in-height fences and other code violations, I visited several municipal facilities, some of which were out of code, including the new Rampart Police Station.

In the spirit of LA’s complaint-driven process for code enforcement I attempted to initiate a code violation complaint, only to discover that the City of LA is also above the law. Apparently, Building & Safety can’t take a code violation complaint on municipal property and developments and I was sent on a journey of “anywhere but here” as I attempted to hold the City of LA to its own standards.

The residents of Los Angeles live in a city that preys on itself. Public money is spent on projects that arrive with their own gravitational pull, [link] bending the community to the will of the project. Schools, fire and police stations, libraries, transit developments, and infrastructure improvements should arrive wrapped in respect, not contempt for the community.

smf: I spent a good deal of my professional career producing television commercials, I’m going to call up an iconic TV spot to address Mr. Box’ point.   The narrator says that the government allows lots of ingredients in hot dogs while an on-camera Uncle Sam, eating a hot dog, looks heavenward when the narrator says that Hebrew National ‘answers to a higher authority’. 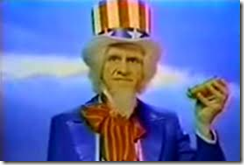 While responsible, the responsibility is not LAUSD’s to take. Adherence is not an option.

The school district answers to the Division of the State Architect in building code and access compliance matters, to the California Environmental Protection Agency and the Bureau of Toxic Substance Control in environmental matters and to the US Justice Dept.and US Dept of Education/Office of Civil Rights and the Americans with Disabilities Act – and it’s own court-ordered special master - regarding ADA access compliance issues.

All have higher standards and greater authority than LA’s municipal code; the authority of these agencies statutorily trumps municipal codes in school construction. For this reason schoolchildren are safer in schools than at any other time in their daily lives.

All LAUSD schools – including HS#9 - go though scrupulous environmental studies, exhaustive planning and design, rigorous plan check and constant inspection, oversight and review before, during and after construction. If issues are identified they are corrected before schools are occupied.

That said I agree with the underlying premise that there is much room for improvement in the relationship between LAUSD and the 26 cities and jurisdictions in which it operates – of which the City of L.A. is just one. The City and the School District are huge hydra-headed bureaucracies with sometimes competing agendas – partnership is never easy.

Children need to be safe going-to-and-from school. I am a fierce advocate for Safe Routes to Schools – both the Federal and state programs – and have read with interest the recent articles in CityWatch and elsewhere about how the program must improve. Not enough money is being spread very thinly.

I have also watched with  concern over how the City of LA has seemingly dragged its feet in traffic control issues around new schools even though its responsibilities are well addressed, described and agreed upon in pre-construction  agreements and Environmental Impact Studies.  A case in point is traffic control at High School #13 off San Fernando Road in Glassell Park – where the city’s interest in speeding up traffic flow on SFR  seems to be in conflict with crosswalks and signaling required by the new school. That school opens in September and I haven’t seen the traffic lights and crosswalks installed yet.