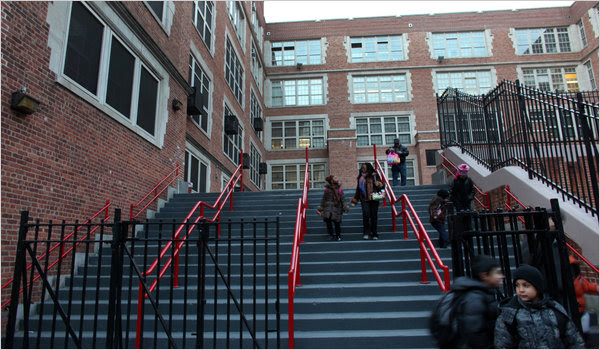 Yana Paskova for The New York Times - The Ross Global Academy on East 12th Street has been ordered to close. Another charter school, Girls Prep, may get the space.

January 12, 2011 - When the city provided a home five years ago for the Ross Global Academy, a charter school founded by the widow of a media executive, its opponents complained about what they considered preferential treatment for a member of the moneyed elite.

But last month, the Department of Education announced that the school would be closed because of poor performance. And now the Ross Global Academy is claiming that the true reason for its fall from grace is not what happened in the school, but something much more ironic.

In a letter to state education officials this week urging a reversal of the city’s decision, the school says that its newly renovated building on East 12th Street has been promised to Girls Prep, another politically connected charter school on the Lower East Side that has long been yearning for better real estate.

The letter also questions whether there was any connection involving Girls Prep’s chairwoman, Sarah Robertson, the daughter-in-law of the prominent financier Julian Robertson, and $25 million in contributions made in recent years by the Robertson Foundation to three entities closely associated with the former schools chancellor, Joel I. Klein.

“We are not complaining about Mr. Robertson’s heavy contributions to public education, which are otherwise laudable, but about the attempt, once again, to favor Girls Prep over another school in consideration of those contributions,” said the letter, written by Edward J. M. Little, a lawyer for Courtney Sale Ross, the founder of Ross Global and the widow of Steven J. Ross, who was the chairman of Time Warner.

The letter could easily be construed as a desperate effort to salvage a school that has faced endless problems, from violence in the school to unusually high staff turnover to poor test scores. But the school’s decision to publicize its fight throws into the open, in raw and awkward fashion, the tight relationship between the city, which has promoted the creation of charter schools in general, and the wealthy patrons of some of those schools.

An internal Department of Education planning document indicates that the intermediate grades of Girls Prep, a single-sex school whose lower grades are located in a public school on East Houston Street, would indeed assume Ross Global Academy’s space by September. The girls prep middle school is currently in temporary, rented space

But the city vigorously denied any kind of ulterior motive. Officials noted that more than 40 percent of Ross’s teachers left each year, including 77 percent last year. They also noted that Ross Global Academy, a kindergarten-through-eighth-grade school with 400 students, was on its sixth principal during its brief existence.

“Ross Global Academy has failed to serve its students well — it has high turnover in its student body, very high teacher turnover, very high principal turnover, and it made the least progress of any lower school in the city last year,” said Natalie Ravitz, a spokeswoman for the Department of Education. “While we understand this is an emotional situation for the school, these accusations are totally baseless and nothing more than a desperate attempt to avoid reality.”

Ian V. Rowe, chief executive of Public Prep Network, the nonprofit group that oversees Girls Prep, declined to comment on the accusations made by the Ross Global Academy. Instead, he said that it was up to the Department of Education to pick where to locate a school in one of its buildings. “Our focus is on finding quality space in District 1 for nearly 200 low-income public school girls that as of June 30, 2011, will have no place to go to school.”

David M. Steiner, the state education commissioner, is weighing the petition by the academy to overturn the city’s decision not to renew the charter. To bolster that petition, Ross Global Academy notes that from 2003 to 2008, the Robertson Foundation donated $5 million to the Department of Education; more than $11 million to the New York City Charter School Center (on whose board Mr. Klein sits); and $8 million to the Fund for Public Schools, which was established by Mayor Michael R. Bloomberg and Mr. Klein. Information on donations for 2009 and 2010 was not available.

The city has given free space in existing public schools to many charter schools, and in 2006, when Ross was created, the city originally planned to place it in a Lower East Side building belonging to a magnet school for gifted children. Parents of that school opposed the move, and Mr. Klein relented, allowing Ross to temporarily use space inside the Department of Education headquarters on Chambers Street.

After Ross was given space in another public school building on East 12th Street, it poured more than $3.5 million into renovations, which might now be inherited by Girls Prep.

As it had with Ross, the Department of Education has struggled to find space for Girls Prep, which has been trying to expand. Last year, after Commissioner Steiner overruled the department’s decision to let it take more space within the Lower East Side school it currently occupies, Mr. Klein threatened to use “emergency powers” to override Mr. Steiner’s decision, but then decided against doing so.

According to Mr. Little, Ms. Ross was deeply disappointed in James D. Merriman, chief executive of the New York City Charter School Center, whom she had consulted as recently as a month ago about the fate of her school.

“She had no idea at the time that this was all about getting her building to Robertson’s daughter-in-law,” Mr. Little said. “She feels betrayed by Merriman because she had regarded him as a confidant and a supporter of the school.”

A spokeswoman for Mr. Merriman, Kerri Lyon, said, “The conspiracy theory suggested in the letter is a sad and desperate attempt to divert attention from the fact that there are legitimate questions about whether this school should remain open.”