School buses from across the city (Downtown, the San Fernando Valley) are busing in charter school parents - with instructions on how to vote taped to the window: 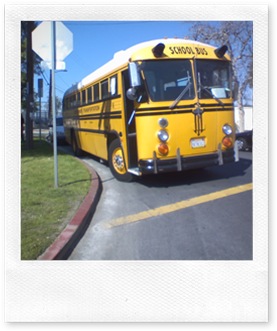 for one (PUC School) of the two charter schools and four Pilot on the High School #13 Public School Choice ballot. There are only five small schools, one will get left out!

The bused-in-parents – often accompanied by children - are off loaded, lined up and shepherded by charter folks and school district staff into the polling place, often with their instructions in hand.  The buses refill with  the recently-voted and go back for another load. The League of Women Voters election monitor says it’s OK because the rules for who can vote based on where they live was changed/clarified on Thursday. The first day of voting was Monday!

It’s like a finely oiled machine – if the machine is in a Chicago or Florida  – Election! 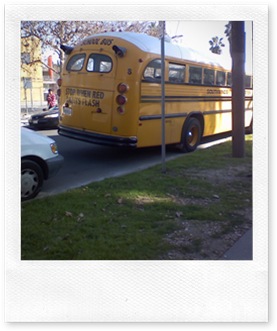 The driver doesn’t take up the photographers suggestion to call the cops.  I think “You call the cops!” was her snappy reply!  I was cut to the quick.