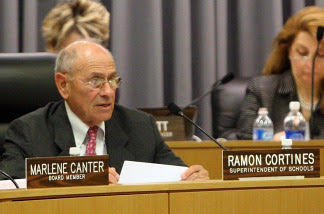 "Even though the achievement gap has persisted for decades, we cannot give up our sense of urgency and attempts to raise student performance for all our children," Cortines said in a statement released on Martin Luther King's birthday.

"In particular, we are looking for models of success from within and outside of the (school) District in helping teachers and communities support the academic achievements of our African American students."

In the Los Angeles Unified School District, 71 percent of white students tested proficient in English, according to the 2010 California Standards Tests, but only 36 percent of black students reached the same level.

In math, 65 percent of white students tested proficient compared to 30 percent of black pupils, according to CST results.

The committee's primary role is to provide an instructional, contextual and operational framework for the district to spread resources, information and educational activities, and to develop policies, practices and programs that support high achievement for blacks and other minority students, according to an LAUSD statement.

Members of the committee include parents, teachers and principals whose schools have demonstrated effective practices affecting black students. Education experts and community agencies that have supported educational issues will also be part of the panel.

"We are looking for ways to implement these best practices and policies for the short and long term success of our African American and other students," Cortines said.