Jan 6, 2011 - The Great Recession has affected people of all ages and classes, but for Generation R -- the 20-somethings who have just graduated college to find a poor job industry -- it's their day-to-day lives. Jeremy Hobson talks to researcher Maria Kefalas about this important group. 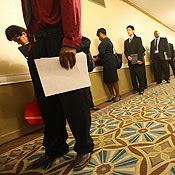 <<Job seekers line up to attend a job fair at the Hotel Pennsylvania in New York City. (Mario Tama/Getty Images)

Jeremy Hobson: Later this morning we'll get another indicator on the nation's job picture when the labor department tells us how many new people filed for unemployment benefits last week. That and yesterday's good news on private sector jobs are all part of the lead up to tomorrow's government report on December hiring.

Well imagine you're taking in all of this news about the slow climb out of recession just as you're getting out of college and into the working world. This mediocre job market is all you know. If you're one of those people St. Josephs University Sociology Professor Maria Kefalas would call you "Generation R." The Recession Generation.

Kefalas has been studying Gen R and she joins us now from Philadelphia to talk about her study. Good morning.

Hobson: Tell us who you've been following to get a sense of what you're calling "Generation R."

Kefalas: They were born between 1980 and 1990. They're the children of the baby boomers. Young people from one of the most affluent communities here in Pennsylvania. The second community is right at the median household income, and then the third neighborhood is the working-class neighborhood.

Hobson: Education in this country has often been touted as a ticket out of the social class you're born into. After having gone through college, do you htink these kids feel some kind of faith still in the education system in the country?

Kefalas: Working class kids said to us, "Listen, we're going to be the first generation of Americans to do worse than our parents." One young woman said, "I just feel burned. My friends who didn't go to college, they don't have debt and they're making more an hour than I am."

Hobson: She actually wanted to have not gone to college?

Kefalas: She actually said, "I don't even know why I spent the money." The middle class kids were saying, "It's very tough, I am filled with anxiety. I can't sleep at night, but I still believe in a college degree. I'm just oging to have to work harder and it's going to take longer." And those ellite kids said, "Is there really a recession? It's more like -- it's just harder for me to get a job." And they're sitting out this recession in a lot of ways.

Hobson: Generation R knows what it's like to be in terrible economic times, but they probably also remember the great times of the '90s or at least the early and mid-2000s, economically. What do they think of the difference?

Kefalas: I think they look at the pop culture icons like Paris Hilton and they're sort of cringing in embarrassment.

Kefalas: They now talk a great deal about not wasting money; conspicuous consumption they say has gone out of fashion. And they don't want to be seen as throwing money around when their families are eating into their resources to keep them afloat, etc.

Hobson: Well, Maria Kefalas, a professor of sociology at St. Joseph's University and one of the lead researchers working on the Generation R project. Thanks so much for your time this morning.