January 27, 2010 |  3:28 pm -- The Los Angeles Unified School District has fired a teacher who had been paid his full salary since being barred from the classroom more than seven years ago for alleged misconduct. 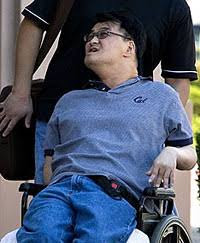 <<Matthew Kim, a former special education instructor, was removed from Grant High School in Van Nuys in 2002 after he was accused of touching co-workers’ breasts and making inappropriate comments to students.

The following year, the L.A. Board of Education voted to fire Kim, who was born with cerebral palsy and uses a wheelchair. But he appealed the decision to a state commission, which overturned it. Kim and district officials have been locked in a court battle over his employment ever since. Earlier this month, a Los Angeles County Superior Court judge ordered the state commission to overturn its decision and allow the district to fire Kim.

Kim has an appeal pending.