by smf for 4LAKids

In the past few weeks a number of educators, parents students and community members have been gathering together to discuss the Public School Choice Resolution and the impending giveaway of LAUSD Schools.

The group is small and diverse, meeting on Wednesday evenings in a central city storefront over coffee and cookies – activists and troublemakers, teachers andconcerned parents; bloggers and union leaders and NYU law students; Black and Brown and White. Building consensus. The discussion has been important and fruitful.  We are well begun 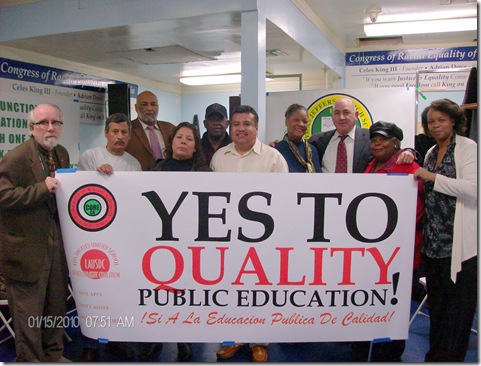 The Group calls itself the Los Angeles School Development Coalition (LAUSDC) and is formed under the umbrella of CORE-CA, The Congress of Racial Equality of California

Here are some discussion points the LAUSDC are working on:

The Los Angeles Unified School Development Coalition (LAUSDC) believes that once educated, the community will not tolerate the giveaway of public schools in the Los Angeles Unified School District and we hold the Mayor of Los Angles, the LAUSD Board of Education, and other private interests responsible for this power play at the expense of the people.

The Lack of a Choice in the Public School Giveaway

The Los Angeles Unified School Development Coalition (LAUSDC) is a group of concerned parents, educators, and students united for the improvement of public schools and the creation of quality educational models. The LAUSDC seeks to create quality in public education

No to the Public School Giveaway

● The resolution demonstrates reckless disregard for the students and community

● There is no transparency in regards to charter groups, hiring practices, or budgeting

● Together, we can create improved models of education for public schools in the US

Help continue the legacy of improving public education that civil rights leaders created. The struggle for Quality Education continues and the people of Los Angeles plan to challenge the public school giveaway with broad based community cooperation.