SEPTEMBER 8, 2009 -- WASHINGTON -- President Barack Obama, seeking to defuse a brewing controversy on his right flank, released the text of an address he plans to deliver to schoolchildren on Tuesday, when he will tell them to take responsibility for their education, pay attention in class and study hard.

"I'm calling on each of you to set your own goals for your education -- and to do everything you can to meet them," Mr. Obama will say in a televised speech from a Virginia high school, according to a transcript released Monday by the White House.

"At the end of the day, we can have the most dedicated teachers, the most supportive parents and the best schools in the world -- and none of it will matter unless all of you fulfill your responsibilities. Unless you show up to those schools, pay attention to those teachers, listen to your parents, grandparents and other adults and put in the hard work it takes to succeed," he will say.

Previous presidents have also addressed schoolchildren, and Mr. Obama had thought his personal narrative would be inspirational. In his speech, Mr. Obama will touch on stories that he has told in the past, of a disadvantaged background, of being pushed by his mother to wake at the crack of dawn, of his wife Michelle's rise from underprivileged roots to the halls of the Ivy League. 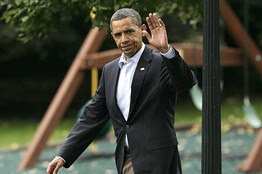 <<Reuters - President Obama waves as he walks on the South Lawn before his departure to address the Cincinnati AFL-CIO Labor Day Picnic on Monday.

But this speech has roused controversy among some conservatives, who have said he is trying to indoctrinate their children with a "socialist" political agenda. Some parents have said they would keep their children home from school rather than allow them to watch the president. The controversy, stoked by conservative talk-radio hosts and some politicians, took White House officials by surprise, and marked a new low in the deteriorating relationship between Mr. Obama and a right wing he had pledged to work with in a postpartisan presidency.

"I think it's a sad, sad day that the political back-and-forth has intruded on anyone speaking to schoolchildren and teachers and parents about the responsibilities that they have as we enter a new school year," White House spokesman Robert Gibbs said Monday.

The release of the speech appeared to mollify some, but not all, of Mr. Obama's critics. A spokesman for Texas Gov. Rick Perry, a Republican who last week had expressed sympathy for parents worried about the speech, said, "It looks like a lot of the concerns were heard by the White House." But he added that Mr. Perry still believed that "better communication should have taken place between the White House and local school superintendents."

Returning from a bike ride on a holiday Monday, Scott Montague, whose daughters attend Dealey Montessori school in Dallas, said he supported the president speaking to children. "I think any president should be able to do that as long as it's about the value of an education," he said.

Roger Cooper, an insurance agent who was out shopping with his wife and three school-aged children, said he hadn't read Mr. Obama's speech but had read about it on the Internet. "It's propaganda," Mr. Cooper said as he emerged from an Apple Store in Dallas's Knox-Henderson neighborhood. "I don't trust the man. He's been nothing but a deceiver. Why would I want my children exposed to that?"

The flare-up is the latest in a string of attacks from the right. The White House announced just after midnight Sunday that Van Jones, the president's "green jobs" adviser, had resigned, after conservatives seized on a series of controversial statements he had made before taking the post. Earlier this summer, the White House was forced to halt an effort to collect emails from supporters who were asked to report suspect claims about Mr. Obama's health plan.

Secretary of Education Arne Duncan acknowledged on CBS's "Face the Nation" Sunday that some of the materials provided to local school officials were poorly worded and may have lead to some confusion about the speech's goals.

—Amy Schatz and Leslie Eaton contributed to this article.