HAPPY FIRST DAY OF SCHOOL: A big blue barrier comes between a Mt. Washington parent and her neighborhood school

From the Eastsider LA Schoolyard Blog 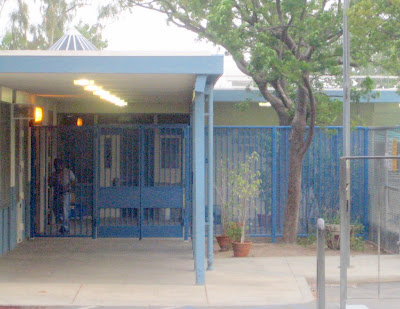 It was not uncommon on school days for the front doors of Mt. Washington Elementary to be swung wide open, a welcoming symbol for kids as well as neighbors of this hillside neighborhood. But when the school reopens after the summer break, students won't be greeted by those open doors. Instead, they will encounter a big wrought iron gate that was installed a few weeks ago for reasons that have mystified and angered some residents and neighbors.
Why the school district spent an estimated $20,000 on the fence has never been made clear to parents and residents, said former Mt. Washington Elementary PTA board member Roberta Tinajero-Frankel. Tinajero notes that there is already chain link fence surrounding the rest of the campus. Vandals still managed to break into a school building over the winter break, but this new fence would not have prevented that, said Tinajero. The principal told Tinajero in May that the fence would probably not be installed because of budget cuts. But apparently the district found the funds.
"This is a school that does not have a functioning photo copier," said Tinajero. "This what our very limited resources are being spent on? It's the wrong message at the wrong time."

What bothered Tinajero, whose son attended the school, and other neighbors

the most was that the decision to install the barrier was done without input from parents despite their request to get involved. One Mt. Washington resident, in an email Tinajero forwarded to principal Sosie Kralian, said the lack of community involvement about the fence could hurt the school:

"It is counterproductive to push forward with a fence without parental and community input. It is creating controversy where there needn't be any, and it's making many parents and community members feel shut out of the process and therefore upsetting them. I'm not arguing for or against a gate. I am arguing in favor of healthy communication and an atmosphere of inclusiveness."

The principal did speak about the fence in a meeting in June - after the project was already approved. There was apparently some concern about providing additional protection for kindergartners students located near the entrance. But, if there was a security concern, shouldn't residents have been notified, 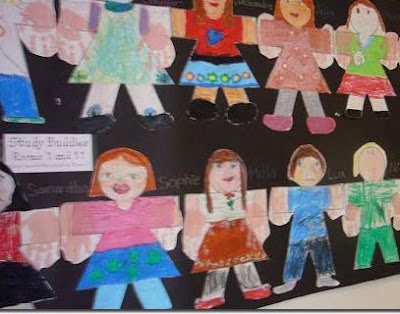 asks Tinajero.
The school is closed for the summer break, and principal Kralian could not be reached for comment.
Tinajero is no longer involved with the PTA since her son will be attending a charter school this fall. But she walks past the school nearly every day and the new fence serves as a reminder of the long way the school district has to go to keep parents and residents in the loop.


"I feel like the elementary school is one of the top schools in the district - it's the pride of the community," said Tinajero, a longtime Mt. Washington resident. "We should have been able to work collaboratively on this decision."