“Unfortunately, right now [the governor] is holding most bills hostage to his demands for actions he couldn’t get through the normal legislative process, but it is my hope that California’s school children aren’t going to pay the price for such political gamesmanship.”

As wild and exhausting as the all-night marathon budget negotiations were at the end, some good things happened this year, especially the success of my education bills.  I came to the Legislature in large measure to help reform the way that we structure education in California.  This year, I was very pleased in getting key education bills passed and sent to the Governor’s desk.  Unfortunately, right now he is holding most bills hostage to his demands for actions he couldn’t get through the normal legislative process, but it is my hope that California’s school children aren’t going to pay the price for such political gamesmanship.

Here are a few of things of which I am particularly proud that came out of the 2009-10 legislative session and are on the Governor’s desk awaiting signature.

“Race to the Top.”  Having already been appointed to chair the Assembly Education Committee last year, I was honored when Speaker Karen Bass announced the formation of the Committee on Education for the Fifth Extraordinary Session, which I will also chair.  This new committee will hold a series of hearings to develop legislation necessary to place California in a favorable position to compete for federal Race to the Top funds.  Speaker Bass calls this “a historic opportunity for California,” and has stated that “Chairwoman Brownley has my full confidence.”  The President has given us a challenge, and through this new committee we intend to meet that challenge, including bringing together teachers, parents, school leaders, researchers, and everyone with a stake in successful public schools.  More than $4 billion is available nationwide in Race to the Top funds.  California must be in a position to get our fair share.

It was a particular honor to have the opportunity to meet with U.S. Secretary of Education Arne Duncan earlier this month in a private meeting with Speaker Bass. 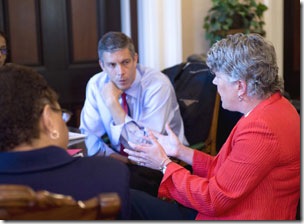 His staff indicated that the preliminary guidelines for Race to the Top federal grants will follow review of over 1,300 public comments, thus application deadlines will likely be extended for the first phase into February.  While I intend to move quickly to ensure that California meets the President’s challenge to innovate, we must also move thoughtfully so that we don’t commit to programs we cannot sustain and that will not produce results.

I have scheduled Education Committee hearings to take place in Sacramento on Tuesday, September 29; Wednesday, October 28; and Wednesday, December 16.  I will also convene a hearing in Southern California on Wednesday, November 18.

AB 429, passed on a 69-0 vote and allows parents and teachers to track individual students’ year-to-year progress in a variety of academic areas as required in the Race to the Top guidelines.  It should help California gain a competitive edge, and allow students to gain confidence as they track their own successes over time.

AB 8, passed 64-0, is an important bill that would begin a process of developing a new school finance system to provide greater transparency and demand more accountability.  Years of court mandates and ballot-box revisions have had the unintended consequence of making a mess of the way we fund schools.  The current system is not logical, results in significant disparities between school districts with similar characteristics, and makes it difficult for teachers to respond to the needs of their students.

AB 851, passed 67-0, removes arcane sections of the Education Code pertaining to school district funding, freeing both state and local officials from having to consume their time doing cumbersome and unduly complicated calculations that impede efficient administration.

AB 487, passed 59-0, helps cash-strapped school districts recover some of the millions of dollars they spend annually on instructional materials.  Over the last four fiscal years, the Legislature has appropriated $1.3 billion to California’s nearly 10,000 schools to buy instructional materials for the classroom.  However, under current law, when materials become obsolete, districts can only donate to libraries, literacy projects or non-profits, or recycle or send them to landfills.  AB 487 allows school districts to sell their obsolete materials and thus put millions of desperately-needed dollars directly back into the hands of the schools.

ACR 54 is a joint resolution stating the intent of the Legislature to bring per-pupil education spending up to or beyond the national average and to a level that accounts for the actual cost of educating California’s diverse student population.  We are failing our youth by setting high academic standards but failing to devote the resources children need to meet those world-class standards.

We have one of the highest pupil-to-staff ratios in the country, yet we spend significantly less per student than schools and districts in most other states.  We spend $46,000/year for each prison inmate, but less than $6,000 for each student in our K-12 classrooms.  The priorities we should be setting are self-evident.

AB 627 establishes a pilot program to fight an alarming rate of childhood obesity by setting nutrition and activity standards in licensed child care facilities.  According to the Centers for Disease Control and Prevention, almost 20% of children between the ages of 2 and 5 are already overweight.  When the state licenses a child care facility, it has an interest in seeing that those facilities help establish healthy eating habits and promote regular physical activity.

Assemblywoman Julia Brownley serves as Chairwoman of the Education Committee, bringing a rich understanding of educational issues gleaned during her 12 years on the board of education of the Santa Monica-Malibu Unified School District, including three terms as board president.

After serving her community, Assemblywoman Brownley was elected to the California State Assembly in 2006 and re-elected to a second term in November 2008 from a district that spans from Santa Monica in the south to Oxnard in the north.