DOWNTOWN LOS ANGELES - After years of refusing to move an inch, it looks as if United Teachers Los Angeles has taken the first step toward immersing itself into the reality of the public education world of the present. It is only a baby step and there’s a big difference between words and actions, but it offers a hint that change could come.

Startling many, an Aug. 28 letter from organization President A.J. Duffy, which is posted on the UTLA website, talks of submitting proposals to run schools. Historically Duffy has tried to insist that UTLA should staff all of L.A. Unified’s teachers by right, with no competition and no proposals necessary. With this letter he has cracked open the door to the possibility of a new world for L.A. teachers and the teachers’ union. He openly recognizes what’s happening as an opportunity to compete with his long-time nemeses: charter schools, which do not have to be union shops.

It is a bit premature to offer congratulations. But this is a positive move, and we hope more follows. The shift won’t become major until there is some meat on these bones.

The tiny change is a direct result of the move by the Los Angeles Unified School District to allow charter organizations and other groups to bid to assume control of some 250 schools (50 new facilities and 200 existing ones). The plan was introduced by board member Yolie Flores Aguilar and championed by Mayor Antonio Villaraigosa. Amid controversy, including strenuous opposition from UTLA, it was approved by the school board last month.

While Duffy’s letter speaks of a “more collaborative direction that empowers teachers, parents and our communities,” it is not clear how deep UTLA’s commitment to the new plan goes, since Duffy also writes of looking into “legal concerns.”

It would be a mistake to pursue a legal remedy. The momentum is extraordinarily strong for new ways of improving schools, and momentum that strong always finds a way to prevail, sooner or later. The wisest route would be to embrace growth and change. UTLA should be leading the charge for better schools, not just better teachers’ benefits, rather than falling victim to others who want to do so. 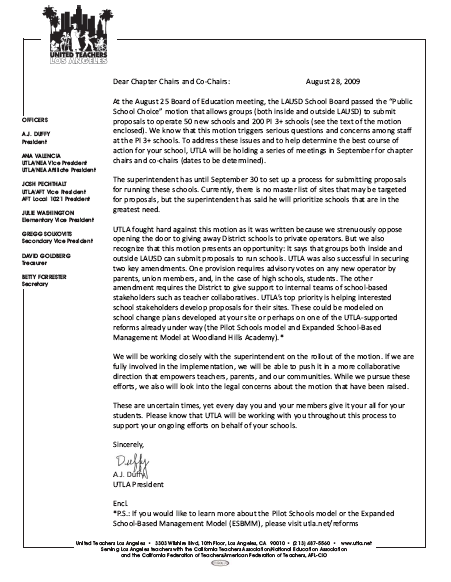 IT SHOULD COME AS NO SURPRISE: 4LAKidsdiffers with both President Duffy and the Downtown News

The "advisory votes on any new operator by parents, union members, and, in the case of high schools, students" called for in UTLA's amendments to the resolution are empty promises. I wish I could believe otherwise – the Kool-Aid tastes so sweet – but the only advice the current Board of Ed majority is going to follow comes from someone or somewhere else than parents, union members and students.

The Bond Oversight Committee is advisory to the Board of Education. Our advisory mandate is actually a part of the California State Constitution , a Memorandum of Understanding with the Board and the bond language of every school bond passed by the voters since 1998: BB, K, R, Y and Q.

The Board has chosen to ignore our advice and counsel on this and other matters of late with a polite thank you and a smile …'your three minutes are up'.

Advisory votes are unenforceable; they are a waste of pixels on your screen and ink on the page.

The LADN says "it would be a mistake to pursue a legal remedy", while UTLA says "we also will look into the legal concerns about the motion that have been raised".  That is the promising baby step.

No one wants to be litigious. Everyone would love to avoid confrontation. Whether the children of LA succeed is infinitely more important than whether the mayor, the teacher's union, the oversight committee or this blogger looks good or not. However this is a nation of laws – and the rights and best interests of the voters, taxpayers, children, parents and community members are being trampled upon here. Literally billions of taxpayers dollars and future bonded indebtedness are at stake.  And hundreds of thousands of young lives.

There are legal questions; it is the job of the courts to sort them out.

The superintendent himself has said a school has been 'stolen' by the mayor's partnership. Green Dot founder Steve Barr advocates "hostile takeovers" of District schools.  Ben Austin – who (follow the money) connects Green Dot to the mayor's office – calls for revolution funded by Broad and Walton, etc.

Lest we forget the courts have already ruled that the mayor (who now currently claims this resolution as his plan) has no role in the governance of LAUSD …even if twice in the past three months he has been sitting on the superintendent's chair during Board of Education meetings.