Blogger Mark Lacter set up the following story in his LA Observed blog this morning as follows:

"This week, the WSJ profiled LAUSD Superintendent Ramon Cortines, focusing on his novel strategy of being open and honest about how awful the schools are. How awful? At some schools, as few as 1 percent of the students were able to do math work at their grade level or above."

By LAUREN A. E. SCHUKER | The Wall Street Journal | Education

September 3 -- LOS ANGELES -- This city's school district is the second largest in the nation, with nearly 700,000 students. But it has far fewer dollars per student than other major urban districts. Overcrowding and teacher turnover are among the worst in the country.

As new city schools Superintendent Ramon C. Cortines prepares on Wednesday to start his first full year at the helm, his strategy for a turnaround is to emphasize those very points.

By shining a spotlight on some of the most egregious failings of the city's schools, Mr. Cortines said he hopes to create enough transparency, embarrassment and even outrage to break a logjam among the school board, city leadership and local teachers union that has stymied past attempts at change.

Mr. Cortines also wants to break a taboo against evaluating teachers' performance and has threatened to reorganize the city's worst schools. "I want this district to be data-driven and transparent about everything," he said. "That means that sometimes we're not going to look so good. But let me tell you, if we're going to improve, we need to know where we are."

One of his first acts upon taking the job in January was to send all parents a report card that evaluated each school in the district on everything from graduation rates to reading and math proficiency levels. At some schools, as few as 1% of the students were able to do math work at their grade level or above.

His strategy carries risks, including that the increased transparency could expose a failure of his efforts to bring improvements.

Mr. Cortines has spent a good part of his career running big-city school districts, including Pasadena, Calif., San Jose, Calif., and San Francisco. He headed the New York schools in the early 1990s but clashed repeatedly with then-Mayor Rudolph Giuliani over the school budget. He did a six-month interim stint running the Los Angeles schools in 2000.

This time, however, he must grapple with an added problem: California's deepening fiscal crisis means he must make a 15% cut to the district's annual budget of roughly $5.8 billion each year over the next three years.

Mr. Cortines, 77 years old, was raised in San Francisco by adoptive parents and went to public school until his parents pulled him out for unruly behavior and tutored him at home for several months. His friends went to Catholic and independent schools. That experience left him open to different sorts of educational arrangements. "I have taught at every level, and I know that one size doesn't fit all," he says.

Some changes have already begun. In late August, the Los Angeles school board approved a plan to allow outside groups to run as many as a third of the district's schools, including about 50 new campuses. Mr. Cortines endorsed the plan at a recent meeting, saying, "For too long we have protected the status quo...even when we knew things weren't working."

But A.J. Duffy, president of United Teachers Los Angeles, the local union, argues that change has to come from within the system, not outside it. "With this motion, the school board members are abdicating their authority," he said. "We know that our schools desperately need help and we want to push for that help." 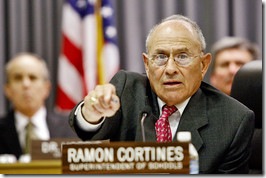 Still, longtime critics of the school system say they find Mr. Cortines's approach refreshing. "Everybody in Los Angeles knows the district is failing," says Ben Austin, an education activist who runs the Parent Revolution, a coalition to give parents a voice in pushing changes to the district. "The question we're all asking is whether Ray and the district leadership are going to try to make the existing system work a little better or whether they are going to acknowledge that the existing system is designed by adults for adults about adults."

Mr. Cortines is also open to using student data to assess teachers, an idea long opposed by many teachers unions. He wrote to U.S. Secretary of Education Arne Duncan to let him know that Los Angeles was willing to include student test scores with other measures to evaluate teachers -- a move that would allow the city* to qualify for federal stimulus funds. Although the California Legislature has forbidden the practice by law, Mr. Cortines says he may seek a waiver.

* Hopefully Mr. Cortines said and meant: “the school district”. Cities and school districts are constitutionally separate entities in California …a fact that seems lost on many. - smf

One of the biggest sticks Mr. Cortines can wield is "reconstitution," in which the district determines a school to be failing to improve and reorganizes its staff and teachers. Mr. Cortines says he plans to reorganize and possibly reconstitute some schools after the state releases its annual assessments in mid-September. "When the [test] scores are announced," he says, "I will reorganize some schools that have not made progress -- and when I say progress, I mean double-digit progress."