STOP TEARING THE HEART OUT OF L.A.

Kamala Lopez in the Huffington Post| Photos by Benjamin Alfaro

I first met Rocio Martinez at a St. Patrick's Day Party. She sat across from me, an attractive Latina woman with an underlying edge, and after staring past each other uncomfortably for a while we struck up a conversation. My first thought, when she told me that she was a Youth Relations Associate in the Crime Prevention Unit for the LA Unified School District was "kismet!" Here I was, developing a TV series about young Latinas in gangs and the expert had fallen right into my lap. Little did I realize how much more than that our chance meeting would become. 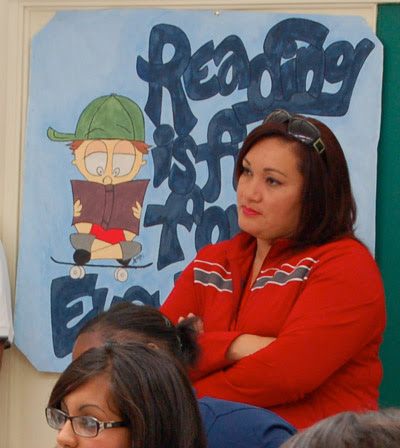 Rocio is one of a fifteen-person team who responds, along with the LASPD (Los Angeles School Police Department), to the frequent phone calls that come into their office when there is violence, usually gang related, at a school in the LAUSD. She is the one who the kids will speak to, the one that can interpret their communications, someone to whom they are willing to explain their beef - not to the teachers, certainly not to the cops-- just to her. 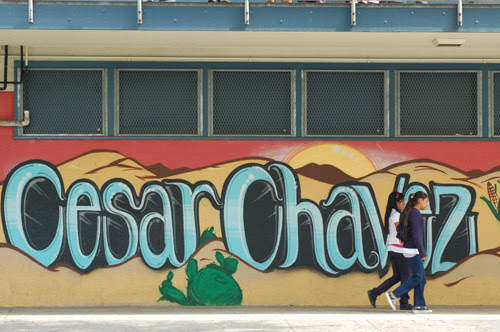 And why's that? What is it about Rocio that makes these kids on the edge of the abyss trust her? Well, for one thing, they know that Rosi, as they call her, can relate -she used to be one of them. A girl who grew up in the hood, Rocio has been intimately involved with gangs her whole life. "La Leona" (The Lioness), as she's known because of her ferocity in protecting her three sons, raised her kids in South Central. Her husband was a member of the Westside Harpys and did time for robbery and gang related crime. Sadly, as is the case with many single moms in these neighborhoods, she couldn't keep her boys from falling in with the gangs either. Her two eldest sons got involved with the Bloods, the Stone Piru crew, while her youngest son ended up as an "Ese," a Latino warrior in the Crips Southsider gang - two notorious African American gangs that are mortal enemies with members in the same Latino family - now that's stressful.

According to a recent front-page story in La Opinion (the leading southland Hispanic newspaper; May 21st 2009), the gang problem is reaching epidemic proportions. There are almost a million identified gang members in the United States, two hundred and thirty thousand of them operating in the state of California through more than six thousand nine hundred gangs. In some cities in California, up to eighty percent of the crime is gang related. Gang homicides are increasing at a terrifying pace in many cities like San Diego and Salinas, where there has been a 125% increase in killings since 2006.

Daniel McMullen, FBI agent in charge of gangs in L.A., explains that southern California is the epicenter of street gangs and in the city of LA there are nineteen gangs operating that have military training. Coming from South and Central America and Mexico, these militaristic gangs are run like an army, with similar hierarchies, and are blood curdlingly brutal. Some, in fact, were trained by us in the various wars we've had a hand in - El Salvador, Nicaragua... The amount of money at stake in controlling the U.S. drug trade is an overwhelmingly powerful lure for these young people who are generally poor, uneducated and whose good job prospects are slim to nil.

Females are the fastest growing new segment of the gang population, and many of them are underage (more than three of every ten new gang members are young women). The FBI reports that the women start out as girlfriends or wives of gang members but, as more of the males are arrested and jailed, the women have started to control the operations.

Gang recruiters are extremely active within the schools, both in public middle and high schools, as well as online. Connie Rice, Director of the Advancement Project, says there are some parts of the city so completely under gang control that she must receive clearance from gang generals before being able to enter their territory to offer aid. She is concerned that treating the gang problem simply as a matter of crime is not working. The problem, she says, is both social and cultural and we need to be looking at creating programs to help prevent kids from joining gangs in the first place.

Rocio Martinez became one of the fifteen youth counselors in the mediation group called "HEART" (Human Efforts Aimed at Relating Together) searching for a way to help her kids and others like them. The objective of the program, which is unique in the LAUSD, is to "encourage young people to assume responsibility and accountability for maintaining a safe school campus." HEART is there to broker the peace between rival gangs and keep violence from escalating or exploding. If a HEART counselor can keep a kid from being sent to Juvenile Hall, they have done their job. Once a young person falls into the prison system, the deck is stacked against them; and by all accounts Juvenile Hall is worse than jail. Rocio explains that in adult prison the major gangs police themselves, adhering to the strict code of the North/South divisions; there is rarely inter-gang fighting. In Juvenile Hall, however, it's a free for all, with every gang out for itself.

If a school decides that a kid is trouble or a known gangbanger or gang recruiter, they will be kicked out and passed off to another school until they end up at the end of the road (usually Santee High School in South Central). After that, their only choice is a "continuation school" like the one at Homeboy Industries (the largest gang prevention program in the country run by Father Greg Boyle). Rocio's three boys ended up there and she credits Homeboy for helping save her kids lives. Homeboy, whose motto is "Nothing stops a bullet like a job" trains ex-gang members, many fresh out of jail, a skill like printing or baking and tries to find them a job in the larger community while also helping these "troubled" kids earn their GEDs. But jobs and funding are increasingly hard to come by and Homeboy is being hit hard by the economic crisis.

Rocio invited me to come speak to the all girl "at risk" groups that she had been assigned by HEART. For these young ladies (all between 11 and 14 years old) this program was their last shot at redeeming themselves before the LAUSD would have to wash their hands of them and deliver them to the authorities. As I walked onto the campuses at Northridge and Carver Middle Schools the first thing that struck me was how young these kids were; I mean, they were definitely children. Yet the signs on the chain link fences that said "NO GUNS ON CAMPUS" clearly indicated an underlying reality that could not be argued. 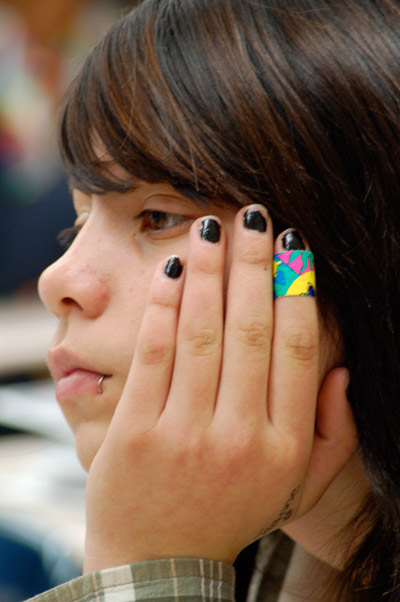 These kids are living in a stone cold tough ass world. I looked out at the sea of mostly brown and completely beautiful faces staring back at me as I told them that they could be whoever and whatever they wanted, that they should work hard and pursue their dreams and they would find their way. But in the back of my mind I kept thinking "How can we, as a country say we care about our children when we give them less than nothing?" No art classes. No music. No field trips. No joy. No safety - six kids were shot leaving Carver Middle School and walking a few steps to the bus stop last year. Their teachers are being fired. The classes are being stuffed with more and more kids. They go to school all year, with no summer vacation, just on a rotating wheel of two months on, one month off... 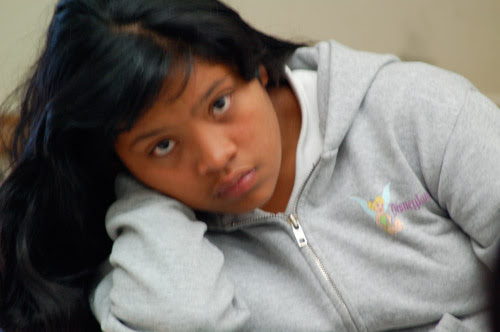 For many of the young women I spoke to, their families had been in gangs for generations and their neighborhoods were the only place they knew. I was shocked to find out how many of these kids had never been out of East L.A. or South Central - too dangerous, Rosi explained to me, they would have to cross through too many rival gang turfs to make it to the beach or to Griffith Park. One boy, she told me, arrived at school bloodied and bruised every single day - having had to take several buses through enemy territory to get there. But he continued to show up - that's how much he wanted to be able to go to school. 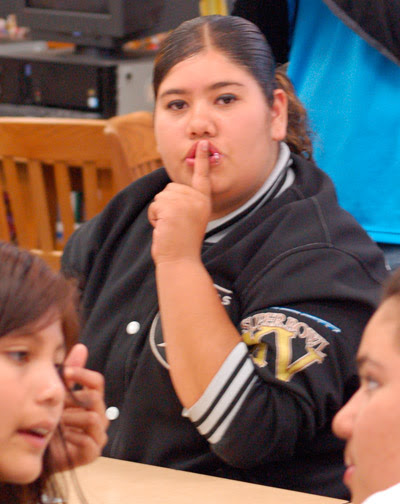 One girl told us how she had to get up at two in the morning to do her homework because it was the only time her house was quiet enough for her to concentrate with all the gangs, guns and partying her parents were doing. But she was in school and her homework was done. And I found a similar fire in the bellies of most of these young ladies - they wanted to learn, they wanted to try new things and aspired to greatness, they just had absolutely no tools, no maps and little guidance. 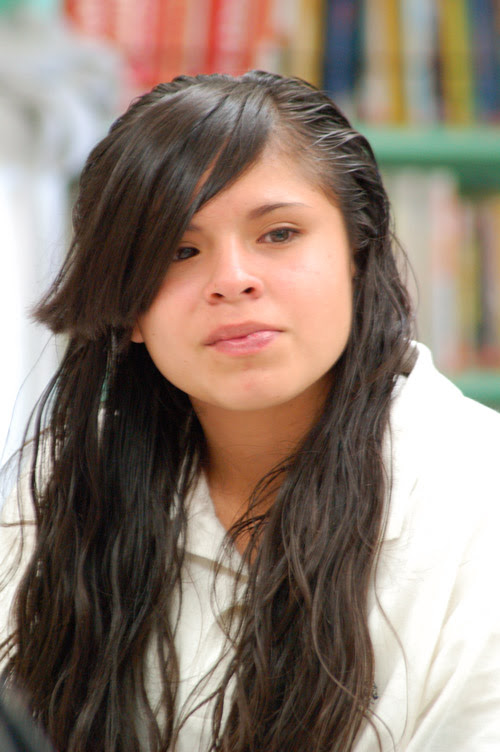 Recently Rocio found out that the HEART program is being cut in half due to budget cuts. That means that for the entire LAUSD, almost four hundred public middle and high schools, there will be only eight counselors available to deal with the gangs and violence on campus. Now that the HEART program has been cut, who will be left for these young kids to talk to? Who will advocate for them? Give them advice? Who will offer even some modicum of protection? 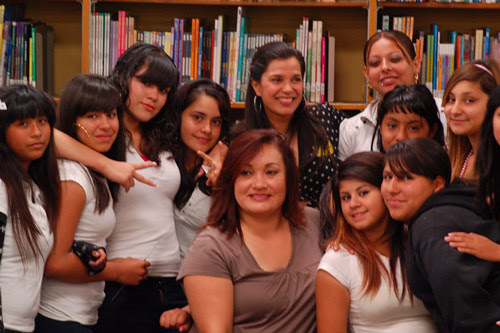 So what can we, should we, must we do? First of all, pressure pressure pressure DC to put their money where the rhetoric is - public schools are failing because we are deliberately ruining them with massive cuts of funding and resources, ridiculous constant testing that amounts to minimal actual knowledge, tying our teachers hands behind their backs, letting parents off the hook, and completely ignoring the needs of the kids themselves. Secondly, getting involved - as citizens, as humans, as people whom supposedly care about the future of our communities, our race, and our planet. Volunteer to do something with the kids, or organize an outing or take them on a tour of a small business, or buy the school some books. We need to create and support programs that show these young people there are other possible avenues, environments, and options.

And we have to do it now. 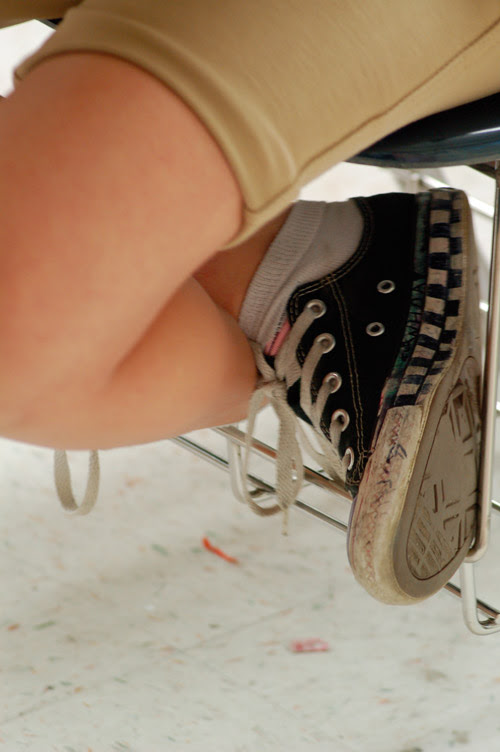