OBAMA’S RACE TO THE TOP: Who’ll blink first: the unions, or the White House?

31 July, 2009 -- The Obama Administration unveiled its new “Race to the Top” initiative late last week, in which it will use the lure of $4.35 billion in federal cash to induce states to improve their K-12 schools. This is going to be interesting to watch, because if nothing else the public school establishment is no longer going to be able to say that lack of money is its big problem.

Four billion dollars is a lot of money, but it’s a tiny percentage of what the U.S. spends on education. The Department of Education estimates that the U.S. as a whole spent $667 billion on K-12 education in the 2008-09 school year alone, up from $553 billion in 2006-07. The stimulus bill from earlier this year includes some $100 billion more in federal education spending—an unprecedented amount. The tragedy is that nearly all of this $100 billion is being dispensed to the states by formula, which allows school districts to continue resisting reform while risking very little in overall federal funding.

All of this is on top of the education spending boom during the Bush years to pay for the 2001 No Child Left Behind law. Democrats liked to claim that law was “underfunded,” but the reality is that inflation-adjusted Education Department elementary and secondary spending under President Bush grew to $37.9 billion from $28.3 billion, or 34%. NCLB-specific funding rose by more than 40% between 2001 and 2008.

It’s also worth noting that the U.S. has been trying without much success to spend its way to education excellence for decades. Between 1970 and 2004, per-pupil outlays more than doubled in real terms, and the federal portion of that spending nearly tripled. Yet reading scores on national standardized tests have remained relatively flat. Black and Hispanic students are doing better, but they continue to lag far behind white students in both test scores and graduation rates. 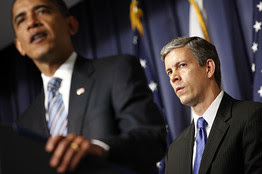 So now comes “Race to the Top,” which the Obama Administration claims will reward only those states that raise their academic standards, improve teacher quality and expand the reach of charter schools. “This competition will not be based on politics, ideology or the preferences of a particular interest group,” said President Obama on Friday. “Instead, it will be based on a simple principle—whether a state is ready to do what works. We will use the best data available to determine whether a state can meet a few key benchmarks for reform, and states that outperform the rest will be rewarded with a grant.”

Sounds great, though this White House is, at the behest of the unions, also shuttering a popular school voucher program that its own evaluation shows is improving test scores for low-income minorities in Washington, D.C. The Administration can expect more such opposition to “Race to the Top.” School choice is anathema to the nation’s two largest teachers unions, the National Education Association and the American Federation of Teachers, which also oppose paying teachers for performance rather than for seniority and credentials.

NEA President Dennis Van Roekel told the Washington Post last week that charter schools and merit pay raise difficult issues for his members, yet Education Secretary Arne Duncan has said states that block these reforms could jeopardize their grant eligibility. We’ll see who blinks first. The acid test is whether Messrs. Duncan and Obama are willing to withhold money from politically important states as the calendar marches toward 2012.

Race to the Top is bound to have some impact, and lawmakers in several states—including Tennessee, Rhode Island, Louisiana and Massachusetts—already have passed charter-friendly legislation in hopes of tapping the fund. But the exercise will fail if it is merely a one-off trade of cash for this or that new law. The key is whether the money can be used to promote enough school choice and other reforms that induce school districts to change how the other $800 billion or so is spent.

Charter schools and voucher programs regularly produce better educational outcomes with less money. But as long as most education spending goes to support the status quo, Race to the Top will be mostly a case of political show and tell.