“HOUSTON, WE HAVE A BUDGET” …unfortunately it’s one for California. 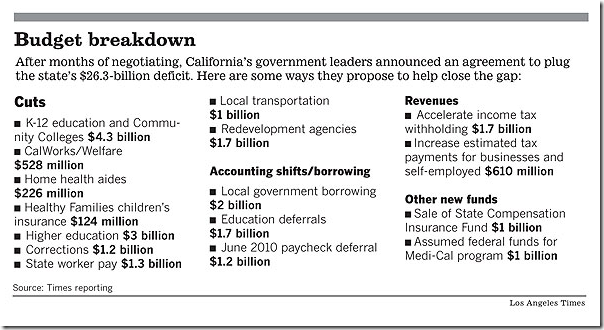 Some programs won't be cut eliminated

Some of the proposals made by Gov. Arnold Schwarzenegger and state lawmakers over the last few months were not included in the final deal.

By Shane Goldmacher and Evan Halper

Budget deal in place, now can they sell it?

As lawmakers prepare for a vote, emerging details could trigger opposition from local governments that would be hurt by the plan. Discuss

• Proposals for plugging the budget deficit

California says they reach the deal on the budget deficit. (Bloomberg News)

About three weeks after the state had to resort to IOUs to pay its bills, Gov. Arnold Schwarzenegger and California's top political leaders said late on ...

As lawmakers prepare for a vote, emerging details could trigger opposition from local governments and interest groups that would be hurt by the plan. ...

"We've accomplished a lot in this budget," said Gov. Arnold Schwarzenegger, as he emerged from his office with legislative leaders Monday evening to announce the deal, after an all-day negotiating session of the "big five" -- the governor and legislative leaders.

Arnold Schwarzenegger emerged from a meeting late on Monday July 20th of the “big five” political leaders in California to announce that, at long last, ...

SAN FRANCISCO — California Governor Arnold Schwarzenegger and legislators have agreed a plan to solve the state's multi-billion-dollar budget crisis after ...

The Golden State, The Hummer and Hydra-Headed Budget

The Golden State. Seventh-largest economy in the world. The place where everyone has always wanted to come, for the weather, the scenery, the optimism, ...

California Governor Arnold Schwarzenegger, amidst the worst economic depression in seventy years, demands that the state legislature dismantle what he calls ...

Details Emerge of Atrocious CA Budget Deal
Daily Kos
If a budget is indeed a moral document, it would seem from this budget that the state of California has the heart of a sociopath and an idiot. ...

All 386 related articles from California, USA »

After a long day of talks yesterday, the four legislative leaders and the Governor emerged from Schwarzenegger's office together, smiling. ...

Big 5 Makes Big Cuts, but California Has a Budget

SACRAMENTO, CA -- The Governor and the Big 5 emerged Monday night from their last negotiation session with a budget deal. Governor Schwarzenegger told ...

By The Heartland Institute , Chicago-Based Think Tank - 13 Hours Ago Facing a widening budget deficit in the midst of a deepening recession, California Gov. ...

Looks like Republicans are going to win out in California's seemingly endless budget battle, despite holding a minority in the state Legislature. ...