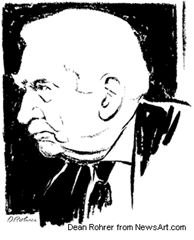 As a passionate insider – the least trustworthy of reporters – I cannot allow the most trusted one to pass without notice.

Walter Cronkite was of the generation one of his colleagues called the greatest.  I am a boomer – it was my parents’ generation. It has taken most of our generation for boomers to accept the greatness of our parents …much of our youth was taken repudiating our parents. As a parent myself I understand and embrace that – challenging your parents is the job description of youth.

Walter Cronkite however transcended that. When we didn’t trust anyone over thirty we trusted Walter. He was dispassionate and honest. He spoke to us and he spoke to our parents; he spoke the truth. Occasionally he spoke truth to power. Unemotional and detached on rare occasions he allowed his passions to rise. He shed a tear when announcing the death of President Kennedy. He simply said ‘Wow’ when men first landed on the moon. The police in Chicago in 1968 were ‘thugs’: the war in Viet Nam ‘unwinnable’. Saying those things did not make them true but it made their truth real.

Apropos of the moment we find ourselves in without him, he has left this: “America's health care system is neither healthy, caring, nor a system.”

You can learn from a man like that and we did. We still can.