IN CALIFORNIA, EVEN THE I.O.U.’s ARE OWED 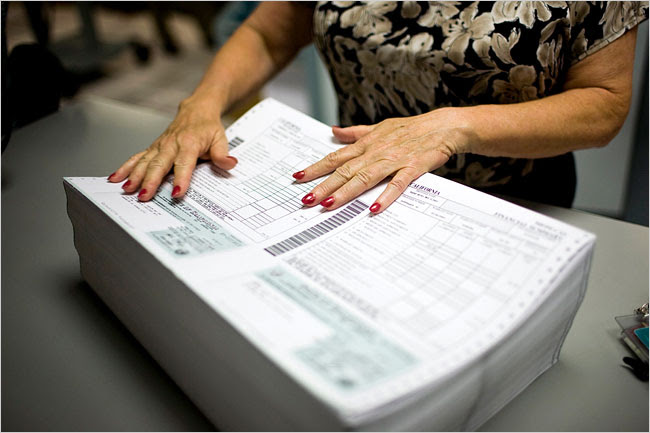 Registered warrants are being issued instead of checks. | photo: Max Whittaker/Reuters

July 8, 2009 -- LOS ANGELES — The only thing worse than being issued an i.o.u. rather than a check from the State of California may be not getting the i.o.u. at all — at least in time to meet the deadline of your bank.

But across California on Tuesday, many vendors who had been told they would receive the i.o.u.’s instead of actual money said they had not yet received them. And if they do not arrive soon, they may be hard to turn into cash.

Last week, the state began issuing the warrants for the second time since the Great Depression. It ran out of cash to pay its bills as the Legislature and the governor failed to resolve the state’s $26 billion budget deficit.

Millions of dollars in i.o.u.’s, known as registered warrants, began rolling off the controller’s presses in lieu of checks to pay taxpayers, vendors and local governments. The warrants offer a 3.75 percent interest rate when they mature in October.

In most cases, banks around the state have agreed to honor the warrants only until Friday, in hopes that the deadline will prompt lawmakers to reach an agreement. As of Tuesday, 71,810 warrants to the tune of $108 million had been printed, but many had not yet been received.

“We are out of cash now,” said Carlos Flores, the executive director of the San Diego Regional Center, which provides services to Californians with developmental disabilities. The center is awaiting a $12 million warrant. “I can pay my staff next paycheck, and that’s it,” Mr. Flores said.

Other state contractors who provide services to the disabled had similar stories. Mark Berger, the chief executive of Partnerships With Industry, which offers job placement and training for the same type of clients, said he, too, had yet to get a warrant. “I haven’t heard of anybody who has received one,” Mr. Berger said.

Jonathan Brown, president of the Association of Independent California Colleges and Universities, said he had yet to learn of a college that received the warrant in lieu of the state education grants.

“My expectation is that they will get them next week,” Mr. Brown said. “That is a real problem because colleges and universities have cash flow needs at this time of year and usually use a line of credit to cover their expenses, and then fill that credit line up with tuition revenues.”

The majority of banks have been clear that they will not take the warrants after July 10. Banks “do not wish to facilitate the lack of resolution of the budget deficit by basically providing this accommodation for an extended period of time,” said Rod Brown, chief executive of the California Bankers Association. “California must become more fiscally responsible.”

Garin Casaleggio, a spokesman for the state controller, said that warrants were issued as bills became due, and that not every vendor would be issued paper immediately.

People expecting money from the state who do not get a warrant by Friday have three choices. They can try to find an alternative bank or credit union willing to deal with someone who is not a customer, they can hold the warrant until it matures and collect the interest, or they can try their luck in secondary markets, where some people are already seeking to buy i.o.u.’s at a discount.

Because of a proliferation of potential customers on Craigslist and other Web sites, like BuyMyIOU.com, the California treasurer, Bill Lockyer, said Monday that his office would not redeem i.o.u.’s held by third parties unless they were accompanied by a notarized bill of sale.

Of course, it is not clear how attractive a piece of California’s debt would be to investors. On Monday, Fitch Ratings downgraded California’s long-term bond rating to BBB from A-, only two notches from junk-bond status, citing the state’s continuing budget drama.

Matt Fabian, managing director of Municipal Market Advisors, said that general obligation bonds had the full faith and credit of the state behind them, but that i.o.u.’s had a lesser guarantee.