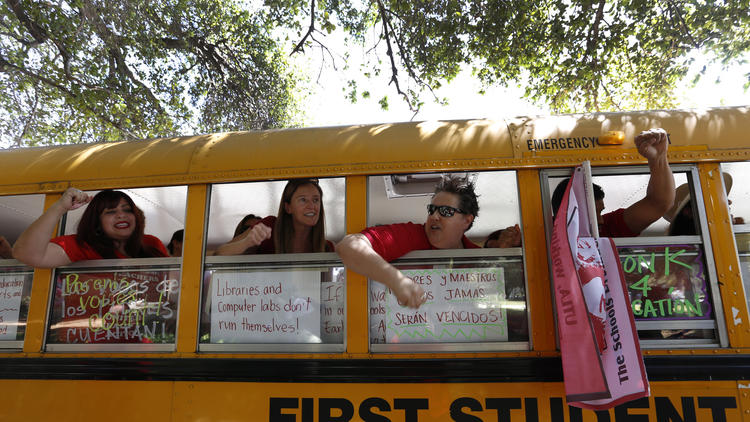 Teachers travel to a series of rallies by bus in April during negotiations for a new contract with the Los Angeles Unified School District. (Francine Orr / Los Angeles Times)

9 May 2015  ::  An overwhelming majority of teachers union members voted to ratify a three-year contract with the Los Angeles Unified School District, the union announced Friday.

"The collective bargaining agreement is good for educators and students," union President Alex Caputo-Pearl said in a statement.

The Board of Education must give formal approval to the deal, which is widely expected as soon as next week.

Teachers had gone without a pay increase for eight years, although they continued to receive salary boosts based on years of experience and additional eligible education credits.

During the recent recession, teachers had agreed to temporary salary reductions. Still,thousands of educators and other employees were laid off.

The agreement includes funding to reduce the size of classes in key subjects or grade levels. Schools may also get more counselors, although the maximum ratio of students per secondary school counselor is still 500 to 1.

The two sides also agreed to develop a new teacher evaluation and support program by fall 2016. In the meantime, the district will streamline the current process. 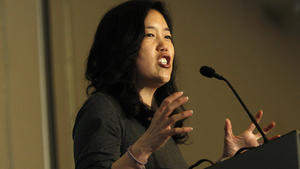 The union had wanted to keep the practice of using two possible ratings. Accepting the district's alternative could result in the district retaining control over millions of dollars in federal aid tied to evaluation standards.

Though he favors the agreement, Supt. Ramon C. Cortines has warned that its cost could contribute to future budget cuts and even layoffs.

Despite improved relations between the union and L.A. Unified, UTLA has said it will protest next week against the district's plans to cut or even eliminate programs that have lost state funding support.

In addition to teachers, the union represents health and human services staff, including nurses and school psychologists.

Self interest is the prime motivating factor in politics: The large turnout of teacher-voters UTLA was able to turn out, both in terms of percentage of potential voters and in terms of percentage of support for the contract demonstrates the power of self interest to Get Out The Vote. In my biased opinion if they can match those numbers at the polls on May 19 – if they can get those teachers to vote again – that will make the margin of difference in what will be low-turnout election. And if those teachers can motivate others – including parents and community members to support candidates who support them – Kayser, Schmerelson and Vladovic – there will be a victory.

To those candidate's opponents, Michelle Rhee looks like an attractive candidate for next LAUSD Superintendent!

The 19th is a Tuesday, UTLA members can wear their red t-shirts to the polls – they will be perfectly accessorized with that “I Voted!” sticker.