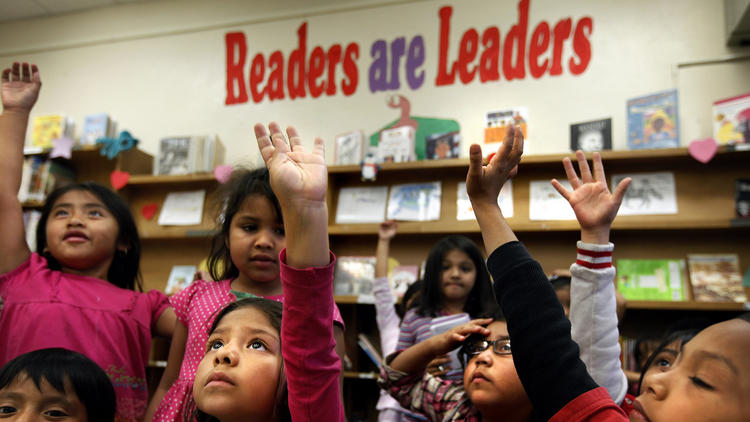 16 May 2015  ::  California educators hailed the $6-billion windfall in funding for elementary, secondary and community college students announced Thursday by Gov. Jerry Brown -- but cautioned that it would not make up for devastating cuts over the past several years.

The budget largesse will boost per-pupil spending by $3,000 next year over 2011-12, a 45% increase. It will also provide more money for training in new state academic standards, adult and career technical education and support for students who are low income, in foster care, challenged by limited English or special needs.

But schools are still struggling to recover from $20 billion in budget cuts and the layoffs of 30,000 teachers since the 2007 recession.

"Critical student programs are beginning to be restored, but our class sizes remain the largest in the country, we rank 46th in per-student funding, and dead last in the number of school counselors and librarians," California Teachers Assn. President Dean E. Vogel said in a statement.

In Los Angeles Unified, officials expect an additional $300 million to $400 million, which they say will help close a $160-million deficit projected for next year. But it will not address potential gaps in the following two years, they say.

Other districts that may not meet their financial obligations over the next three years are Glendale Unified, Inglewood Unified and Castaic Union school districts, according to the Los Angeles County Office of Education.

L.A. schools Supt. Ramon Cortines said the additional dollars would particularly benefit the district’s many disadvantaged students. The district enrolls 200,000 students who are homeless, in foster care, have special needs or limited English skills; 80% of the 600,000 students are eligible for free and reduced-price lunches, a poverty indicator.

“We have a moral responsibility to provide these impacted students with the tools they need to succeed in life,” Cortines said in a statement. “The governor’s increased investment in schools will greatly benefit these students.”

Los Angeles Board of Education President Richard Vladovic, along with member Steve Zimmer, said that balancing the budget would be the top priority for the new funds. The district has issued 609 layoff notices to teachers, counselors and social workers; it was unclear how many will be rescinded due to the new funding.

Vladovic and Zimmer also said another priority would be greater support for the 63% of tenth-graders who may be deprived of diplomas because they are not on track to complete the district’s college-prep curriculum now required for high school graduation. Vladovic said that such programs as full-time summer school should be considered.

Earlier this week, the Los Angeles Board of Education voted to support efforts to close loopholes in reassessments of large commercial properties, which advocates say could raise billions more for education.

Long Beach Unified expects to gain an additional $120 million, with a third of that going toward needy students and another third for one-time funding of books, technology and staff training. But district spokesman Chris Eftychiou also expressed caution not to overly celebrate.

“While the latest proposal is a significant increase, we caution against characterizing it as a windfall, in light of the decade of repeated and unprecedented cuts that California's public schools faced not too long ago,” he said in a statement. “We are beginning to heal from those deep, painful cuts.”

Some educators were not fully satisfied by the governor's proposed budget. The Education Trust-West, an Oakland-based advocacy nonprofit, said Brown’s decision to allow school districts to use $2.4 billion in additional discretionary funding for either Common Core training or payment for previous unreimbursed mandates would deprive needy children of a guaranteed investment in better academic instruction.

“California runs the risk of exacerbating the achievement gap, since some students will be left with teachers who are unprepared, materials that are inadequate, and classrooms without 21st century technology,” the organization said in a statement.