Editorial: BACK TO WORK AT LA UNIFIED

By The Times Editorial Board  | http://lat.ms/1Hw1MxU 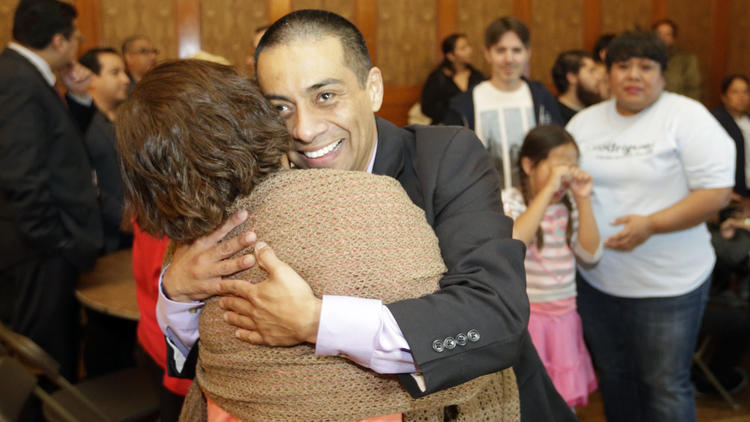 With victory in sight, LAUSD District 5 candidate Ref Rodriguez hugs a supporter at his election headquarters in Highland Park on May 19. (Los Angeles Times)

21 May 2015  ::  Voters — few though they were — sent some strong messages to the Los Angeles Unified school board Tuesday. That two incumbents were voted out showed justified unhappiness with the current board. People are still mad about the badly mishandled plan to purchase iPads for every student in the district. Reflexive decisions by board members — whether it was Tamar Galatzan's unquestioning support for the tablet purchase or Bennett Kayser's equally ideological vote against almost every charter school application — didn't help. Political battles too often trumped basic common sense and concern for students.

The biggest change might be that the board becomes less factionalized, more open to debating each issue on its merits and more involved in the ... work of improving education. -

In the end, though, the balance of the board remains pretty much the same. Galatzan, a reliable supporter of charter schools and the testing and accountability policies put forth by former Supt. John Deasy, was ousted by Scott Schmerelson, the candidate favored by United Teachers Los Angeles. Kayser was unseated by charter school founder Ref Rodriguez, who received tremendous support from the charter movement. Board President Richard Vladovic retained his seat largely because his only challenger was underfunded and little-known.

This page supported Galatzan, with misgivings. She appeared to have learned from the couple of bad mistakes she made. But Schmerelson, a well-informed, congenial retired principal, doesn't hew to every opinion held by the teachers union. He could be a real asset on the board. And Rodriguez, whose Partnerships to Uplift Communities Schools have been found to have serious administrative and financial problems, has nonetheless spoken in favor of tougher oversight of charters and takes other independent-minded positions.

In other words, if everything happens for the best, the biggest change might be that the board becomes less factionalized, more open to debating each issue on its merits and more involved in the big-picture work of improving education.

The board has much on its plate. It needs to provide a clear vision and goals for the district; end the destructive graduation requirement that students earn at least a C in the full range of college prep courses; take a critical look at the district's often lackluster teacher training programs; develop a realistic plan for putting technology in the hands of more students; build a stronger Common Core curriculum; and declare a moratorium on meaningless, symbolic resolutions that waste the board's time.

It should start, though, by selecting a new superintendent. Interim Supt. Ramon C. Cortines has been doing an admirable job of untangling the knotty problems left by Deasy, but the district needs a permanent leader to carry out a long-term vision.