L.A. SCHOOL BOARD SEAT IS A PIVOTAL WIN FOR CHARTER SCHOOL MOVEMENT + smf’s 2¢ 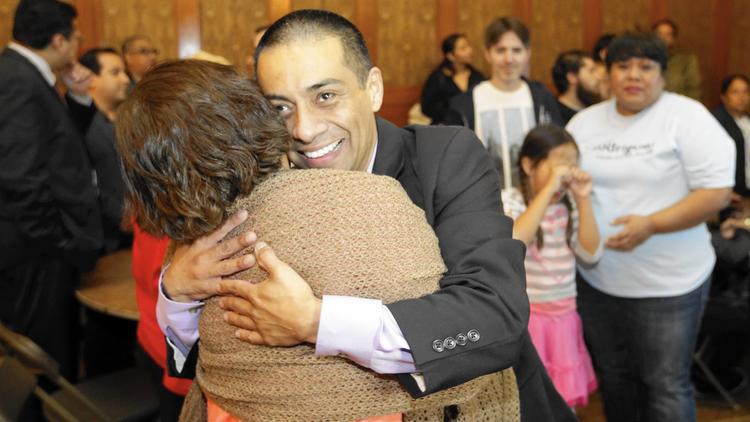 ●●…but why is that little girl crying?

21 May 3015  ::  Supporters of charter schools won a groundbreaking election victory in Los Angeles this week, putting one of their leaders, for the first time, on the governing board of the nation's second-largest school system.

The triumph of charter school co-founder Ref Rodriguez gave leaders of that movement, once outsiders and competitors, a seat at the controls of the Los Angeles Unified School District. The win gives the district's 211 charter schools a key ally they never had before.

Rodriguez defeated one-term incumbent Bennett Kayser to win election to a school board post that represents areas north and east of downtown and the cities of southeast L.A. County.

The Kayser/Rodriguez contest became a high-cost, bitter proxy campaign between charter advocates and the teachers union, a face-off with implications well beyond Los Angeles.

The charter group, in opposing the union-backed candidates, took on a role filled by then-Mayor Antonio Villaraigosa in past elections. Current Mayor Eric Garcetti has declined to be actively involved.

The outcome of races for the Board of Education fell short of a clean sweep for either side. In the west San Fernando Valley, incumbent Tamar Galatzan, who had the support of charter advocates and other well-funded groups, lost to challenger Scott Schmerelson, an ally of the teachers union.

In the third contest, board President Richard Vladovic won a third term; he avoided becoming a target of any powerful political action committees. He represents an area stretching from South Los Angeles to L.A. Harbor.

Rodriguez, 43, now is poised to be a voice on the seven-member board for charter operators and their clientele across the system — families who have left traditional or private schools to enroll their children in the free and publicly funded but independently operated campuses, most of which are nonunion.

No district in the nation has more charters, or more students enrolled in them, than L.A. Unified. About 15% of district students attend those campuses.

"We need high-quality options so that parents can choose what's in the best interests for their children," Rodriguez told supporters Tuesday night. "We need our schools to fit our young people, not the other way around."

That allusion to charters, before backers of those schools, was as close as Rodriguez came to carrying the flag for the movement. He spent more time talking about supporting teachers, a possible fence-mending gesture toward United Teachers Los Angeles.

Rodriguez's elevation has practical and symbolic implications, especially because Kayser had become the board's most unrelenting opponent of charters, routinely voting against starting new campuses or renewing operating agreements with existing ones.

Within his district, Kayser had opposed allowing charters to share space on traditional campuses — charters have a right to classroom space under state law.

"Charter schools will have a bigger voice on the board and someone with a vested interest in supporting the movement in general," said Sharon Weir, principal of New West Charter School, which has clashed with the district in the past. She "wholeheartedly" had encouraged parents to vote for Rodriguez.

The growing number of charters, along with the parents whose children attend them, provides a new and critical grass roots foundation. These enthusiasts include Gloria Soto, a 65-year-old grandmother who had worked in the 1990s to build support for construction of a high school downtown to relieve overcrowding.

Now three grandchildren are enrolled in a charter that she likes, one that Kayser was unable to keep from taking control of a newly built campus in Echo Park.

"I heard a lot of negative and positive about the charters and I believe the best thing is to give it a try and not just go by hearsay," she said.

Kayser's anti-charter votes almost never prevented charter schools from starting or staying open; the board majority generally supported these campuses. But defeating him had become personal for many.

Ingrid Oliu, a parent at a Celerity charter school in Glassell Park, said she was upset to learn that, despite academic success, Kayser "still voted no every time our school came up." She worked phone banks as a campaign volunteer: Rodriguez, she said, "has my support 200%."

Before Tuesday, the pro-charter forces could rely on wealthy donors to help them dominate spending, but had been unable to defeat candidates backed by the teachers union — especially when it called attention to those donors.

To Kayser, the issue wasn't whether charters benefited some students. He believed that the schools' rapid growth was sapping resources badly needed for traditional campuses while also leaving behind students who were more difficult and expensive to educate.

Rodriguez said he was unwilling to limit the growth of charters at this time. But he also insisted that he wanted improved oversight. For example, he wants to track whether charters are pushing out students who could bring down test scores. And low-performing charters should be shut down, he said.

His commitment to oversight will be tested. His endorsement list includes the operators of charters that L.A. Unified tried to close because of low test scores and other problems. The charters appealed to other agencies and were able to remain open.

When asked about one of those campuses, Rodriguez said he didn't know enough about the situation to comment.

Some, including at least one current board member, were concerned that any policy debate over charters was obscured by the negative tone of the campaign.

"We've sunk to a level where there is no viable discourse and no moral conscience when it comes to public education and control of the school board," said board member Steve Zimmer, who was especially critical of the negative campaign against Kayser.

Both incumbents were hurt by fallout from a costly, now-abandoned effort to provide every student, teacher and campus administrator with an iPad.

Charter advocates used that issue against Kayser, even though he was largely a critic of the iPad program; the teachers union used it against Galatzan.

Galatzan had been a close ally of former Supt. John Deasy, who resigned under pressure in October.

That made her a target for the teachers union, which had battled Deasy over several initiatives, including his bid to make student test scores part of a teacher's evaluation.

lRodriguez's victory, though, suggests that charter supporters are an emerging political force in future board elections, analysts say, not only in Los Angeles but in districts nationwide.

“…putting one of their leaders, for the first time, on the governing board of the nation's second-largest school system.”

¿Really? Two of their leaders have been there and done that, albeit in reverse order.

It’s not a linear process; it’s a revolving door.