By The Times Editorial Board | http://lat.ms/1JNRt8C 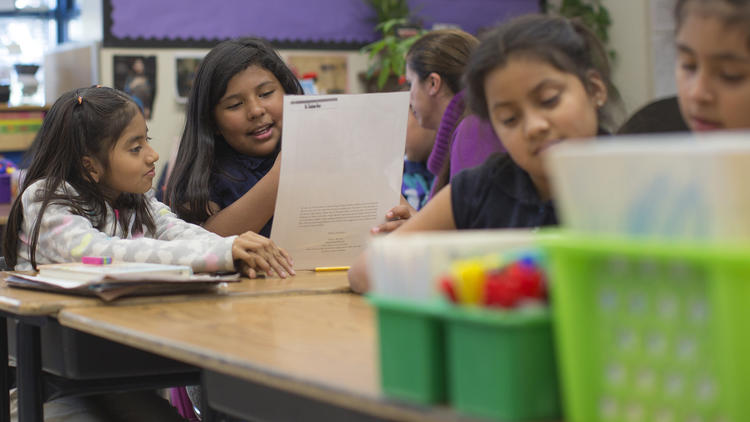 A bill in Sacramento to repeal the cap on how much money school distrcits can keep in reserve faces party-line opposition. Above, third grade students at Gratts Elementary School in Los Angeles.  (Los Angeles Times)

15 May 2015  ::  Hundreds of California school districts, from liberal-leaning Berkeley to the conservative Central Valley, joined the California State PTA, county education officials, education groups and civil rights advocates to support Assembly Bill 1048. The bill would repeal a widely reviled cap on how much money school districts can save, a provision of the otherwise prudent Proposition 2, which voters approved in November to build up the state's rainy day fund.

Local school officials say the cap makes it harder to save for unforeseen costs, such as a new roof or school bus. Less flexibility also casts a shadow on school districts' credit ratings, which can make it more expensive to borrow money for repairs or new construction.

Many of the bill's supporters traveled to Sacramento on Wednesday to share their concerns with the Assembly Education Committee. They needn't have bothered. The wave of bipartisan support for AB 1048 crashed into a solid wall of partisanship.

[L.A. Unified] officials haven't weighed in [on Assembly Bill 1048] so far because passage didn't look promising. That's a craven excuse for not supporting a good bill. -

A survivor of a package of education-related bills proposed by Republican Assembly members this term, this one hung on because almost no one with an interest in education likes the cap. It also flies in the face of Gov. Jerry Brown's effort to empower local school districts to make their own budget decisions. The only supporters are the California Teachers Assn. and other unions, as it makes it harder for districts to take money off the negotiating table. The provision was purportedly Brown's olive branch to unions so they wouldn't oppose Proposition 2. They didn't.

The bill could still be revived, although chances are slim. Assemblyman Patrick O'Donnell (D-Long Beach), chairman of the Education Committee, granted reconsideration of the repeal, perhaps because he doesn't expect it to go anywhere. The vote broke along party lines, with committee Democrats contorting logic to explain why they wouldn't vote yes. (It's worth noting that O'Donnell is carrying a competing but weaker bill that would add flexibility to the cap, and it did pass the Education Committee — with support of Republican members.)

Pressure from the state's largest school district, Los Angeles Unified, could help the bill. District officials haven't weighed in so far because passage didn't look promising. That's a craven excuse for not supporting a good bill.

Assemblywoman Shirley Weber (D-San Diego) missed the committee vote Wednesday. In the past, Weber has shown independence for the sake of education, so it is possible she might vote for repeal. But that's still not enough. Democratic legislators should put aside petty politics and repeal the cap.

smf: The fact that 4LAKids, the CA State PTA and the Times Editorial Board – plus all those hundreds of California school districts, from liberal-leaning Berkeley to the conservative Central Valley, joined the  county education officials, education groups and civil rights advocates to support Assembly Bill 1048 proves the Times Editorial Board can’t be wrong all the time.

The cap is described as ‘widely reviled” and the editorial castigates LAUSD officials for “cravenly” not supporting the bill.  Those are SAT vocab words – fighting SAT vocab words!

And by “District Officials’' The Times means the Board of Education …which is cravenly* waiting for next Tuesday’s election to do anything that might appear controversial.