Susan Desmond-Hellmann, chancellor of UC San Francisco since 2009, is leaving to become chief executive of the Bill & Melinda Gates Foundation 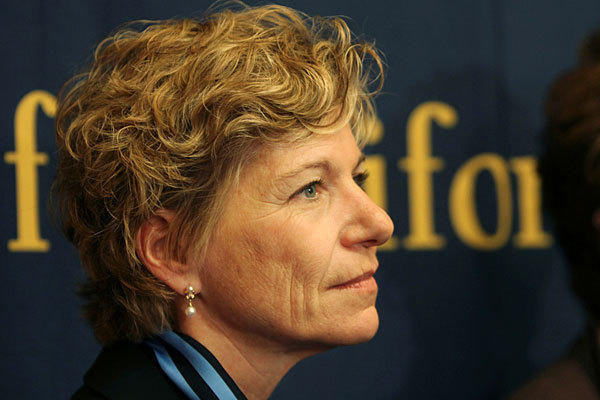 December 17, 2013, 4:07 p.m.  ::  Susan Desmond-Hellmann, chancellor of the medically oriented UC San Francisco since 2009, is resigning to become chief executive of the Bill & Melinda Gates Foundation, the extremely well-funded charity that is active worldwide on health and poverty issues.

Desmond-Hellmann, 56, will leave the university in March, and a search committee for her replacement is expected to begin work in January, according to an announcement Tuesday by UC system President Janet Napolitano. The dean of UCSF's medical school, Sam Hawgood, will serve as interim chancellor until a permanent one is hired.

Desmond-Hellmann, an oncologist, previously held high executive positions at biotechnology giant Genentech Inc. and was key in the development of cancer therapies there, officials said. At UC, she kept the San Francisco campus first in the nation among public universities receiving research funding from the National Institutes of Health and helped develop a new children's hospital, Napolitano said.

Desmond-Hellmann "will leave UCSF a better, more vibrant institution than when she arrived in 2009. This is the true measurement of leadership," Napolitano said in the statement. UC San Francisco is a graduate-level and health professional campus with programs in dentistry, nursing, medicine, pharmacy and biological sciences. Its hospital sites include more than 700 beds.

Desmond-Hellmann had raised some eyebrows among UC traditionalists last year when she proposed a governance plan that would have given the San Francisco campus more independence from the UC system, especially in areas of finance. The UC regents did not approve her proposal.

Some of her supporters thought Desmond-Hellmann should have been a candidate to become UC president, the job that went this year to Napolitano, the former U.S. secretary of Homeland Security.

In a letter to her UCSF colleagues, Desmond-Hellmann said she was attracted to the Gates' foundation work to ease poverty and improve health in developing countries. "My hope is that my leadership can contribute to creating a more equitable world," she wrote. A campus representative said Desmond-Hellmann was not available for interviews Tuesday.

The Gates Foundation, founded by the Microsoft chairman and his wife, has assets of more than $38 billion and is the largest private foundation in the world.

"We chose Sue because of her scientific knowledge and deep technical expertise on the foundation's issues, as well as the organizational and leadership skills required to lead a large, growing and dynamic global organization," Melinda Gates, foundation co-chair, said in a statement. "Sue shares our commitment and passion to create a more equitable world."

Desmond-Hellmann will take over at Gates in May from Jeff Raikes, who in September announced his retirement after five years in the job. He had been a Microsoft executive.