It’s not quite the giveaway some had expected: MAKING THE NEW SCHOOL FUNDING WORK

L.A. Unified and the state are haggling over how best to drive money to low-income districts.

Editorial By The Times editorial board | http://lat.ms/1k8pwx9 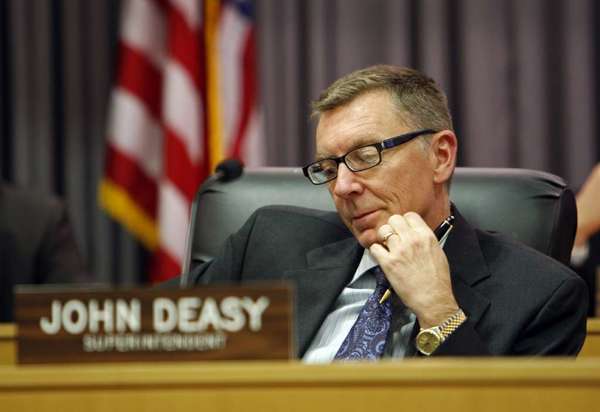 December 16, 2013  ::  The state's new formula for funding schools is a tremendous gift for districts that enroll large numbers of disadvantaged students. But it's not quite the giveaway some of them had expected.

The hoops they must jump through to get the extra money have riled John Deasy, superintendent of the Los Angeles Unified School District, as well as the leaders of several other districts. Deasy calls them outrageous and claims they cheat Los Angeles students of their fair share. His chief concern is that the state rules for verifying a family's poverty level are burdensome, and that they're unnecessarily stricter than federal regulations that qualify students for subsidized lunches.

He's right and he's wrong. It's true that there are things the state could do to make the verification process somewhat less onerous without significantly compromising accuracy. But overall, the rules are reasonable and not all school districts are experiencing the difficulties that Deasy describes. Some have found innovative ways to get their paperwork done, and L.A. Unified should follow suit.

The new funding formula, to be phased in over several years, works this way: It provides a base grant for each student in each district, plus an additional 20% for each student who is impoverished — defined as coming from a family with an income low enough to qualify for a federally subsidized school lunch — or in the foster-care system or not yet fluent in English. School districts with more than 55% of students in one or more of those categories will receive an additional "concentration" grant. In all, L.A. Unified says it expects to get an extra $200 million from the funding formula.

Here's Deasy's chief concern: Under the federal school lunch program, if a school can show that at least 80% of its families qualify for subsidized lunches, the government will provide free lunches to all the students at the school. But for the purposes of California's new funding formula, the state wants districts to provide a count that reflects the actual number of impoverished students in each district.

That could mean less money for L.A. Unified. Deasy says that the income verification process routinely undercounts poor people, especially parents who are difficult to reach and those who are in the country illegally and are leery of government forms. In the district's first attempt this year to get the state forms filled out, only 39% of parents responded.

That is a fair point, but the state's position is more persuasive. Unlike the school lunch program, which involves a relatively small amount of money, the state will be providing thousands of dollars annually for each needy student, and it understandably doesn't want to pay extra for any student who doesn't qualify.

Besides, other school districts with high poverty levels are getting their paperwork done. Santa Ana Unified recently finished its verification process, receiving the required forms from 91% of its students. A San Jose Unified spokeswoman said her district has no quarrel with the state rules. No one is saying it's easy; some districts have resorted to knocking on parents' doors. But it is doable.

Deasy's second complaint is that the state wants districts to go through the income verification process annually, rather than every four years as is required for the meal program. On that score, he's at least partly right. It's unlikely that the number of low-income students changes dramatically from year to year, and switching to an alternate-year count would halve the administrative work required for an annual count. The state should require the count less often (which would mean changing the law).

To its credit, the state Department of Education has already made some concessions. For instance, it is allowing for the probability that districts will undercount their eligible students at first; if they find more students next year, the state will retroactively count them for this year as well and pay them the difference. Also, because some districts got a late start, the state has delayed the deadline from this month to March. The state should go a step further and delay the new requirements for a year, giving districts time to adjust.

But overall, there's no reason the state should have to follow federal lunch rules when it comes to allocating new school funds.