Recruiters' patterns mean students at underserved schools may lose out in the competition for college entrance and aid, experts say. 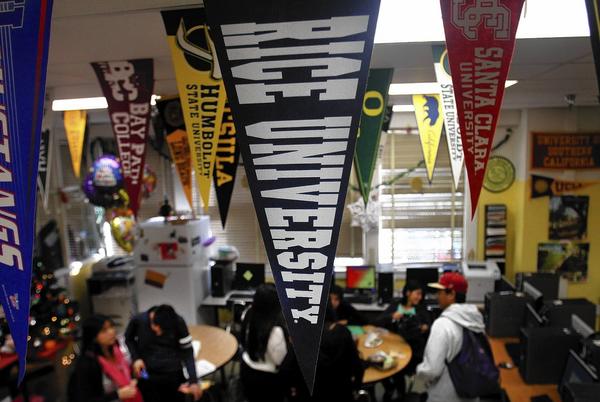 December 27, 2013, 5:02 p.m.  ::  The Webb Schools, a private high school in Claremont, is a magnet for college recruiters from around the country and the world. This fall, 113 Ivy League and other schools sent representatives to the campus — more than the 106 students in the senior class.

Recruiters' visits often are an important first contact for students to discover campuses far beyond their hometowns and for the colleges to discover talented applicants. Students may be left behind in the competition for college entrance and financial aid when admissions officials skip their campuses, counselors and education experts said.

A Times survey of public and private high schools across Southern California found that campuses with a high proportion of low-income and minority students had far fewer visits from college recruiters.

Among schools in affluent communities: La Cañada High School hosted 127 visits from recruiters between August and November. Palisades Charter on the Westside, 133; the private Marlborough School, a girls campus in Hancock Park, 102.

Corona del Mar, a public school in Newport Beach, had 85, sometimes booking as many as six in a single day. On Oct. 10, for example, representatives of Pepperdine, Yale, Lehigh, Washington State, Columbia and Whitworth, were there between 10 a.m. and 1:30 p.m., according to college coordinator Mary Russell. The recruiters meet with students in a special lounge recently refurbished with parent donations.

"Underserved communities have trouble getting resources and access to things like that," said Jefferson Principal Michael Taft. He said his school lost funding for a full-time counselor who arranged for the visits and who could encourage recruiters to overcome negative images about low-income, heavily minority public schools.

Colleges, particularly from out of state, say they do not discriminate against those schools. But they say time and money constraints compel them to return to schools where they've been successful in enrolling students or at least garnering applications. Some concede that students' ability to pay tuition without substantial financial aid also can sway their choices.

Students at high schools receiving few recruiters often need more information and encouragement because they are more likely to come from families with less college experience, according to Gregory Wolniak, director of New York University's Center for Research on Higher Education Outcomes.

"Having visits from schools can serve to compensate for some of those family background differences," said Wolniak, who has studied how high school alumni enrollment networks help students get into college.

Roosevelt senior Beverly Vasquez said she found the college presentations at her public school helpful; she is applying to the University of Redlands now, in addition to Loyola Marymount, Occidental, UCLA, UC San Diego, Cal Poly Pomona and others. But she believes more visits could expand students' horizons, particularly with private and out-of-state colleges.

"I think it would make a huge difference," said Beverly, who wants to study engineering.

Her classmate Javier Evangelista is applying as a mechanical engineering major to Notre Dame, Stanford, UC Davis, UCLA and Cal State Long Beach, among others. He said some colleges probably stay away from public schools because they don't think "there could be a student in this school who has the potential to win the next Nobel Prize, come up with a new technology or change the world."

"I do believe they are making a mistake," he said.

Too many colleges stick to traditional recruiting efforts — often concentrating on high schools with substantial numbers of students who meet eligibility requirements and those that have previously sent graduates to enroll as freshmen, according to Shaun R. Harper, director of the University of Pennsylvania's Center for the Study of Race and Equity in Education.

"That is shameful since so many talented students are not given a chance or not introduced to the vast landscape of higher education opportunities," he said.

In research that tracked young Latino and black men with good grades in New York City, Harper found that many colleges avoided their high schools, wrongly assuming "that nothing good is going on."

Admissions recruiters from the University of Illinois at Urbana-Champaign travel to about 800 high schools nationwide, casting a particularly wide net around the school's home state and neighboring ones. When it gets farther afield, to California, for example, representatives tend "not to visit a school where the majority of the population may not be mobile and are not going to leave a certain radius of home" and are unlikely to be able to afford out-of-state education even with some aid, said Mike Drish, director of undergraduate admissions recruitment and outreach.

Given limits on recruiters' time, the pattern of high school visits can be "self-perpetuating," said Robert Springall, admissions dean at Bucknell University in Pennsylvania. "The downside is that it locks you in to a circle of colleagues and schools, and it doesn't necessarily give you great opportunities to discover completely new schools."

His representative visited about two dozen high schools in the Los Angeles region this fall, including Marlborough and La Cañada, but no schools in the L.A. Unified district.

To help compensate for that, Springall said, Bucknell is part of the Posse Foundation, which connects bright public school students to colleges that offer them full-tuition scholarships. Bucknell annually enrolls 30 Posse freshmen, including 10 from Los Angeles.

Students who impress college representatives during high school visits may have a leg up because the recruiters usually help make admissions decisions.

Joshua Vincent, a Webb senior, said college visits to his school proved "super-important." As a result of one such meeting, he added Babson College in Massachusetts to his list of schools that includes Notre Dame, UCLA, USC and Claremont McKenna.

"I got to know the people who might have my fate in their hands," he said. "It doesn't feel like I am handing my application to some random strangers."