ARE AMERICA’S STUDENTS FALLING BEHIND THE WORLD? In a word: “No!” + smf’s 2¢ more

Testing to the test?       Though the latest PISA test results indicate faults in the U.S. school system, the test requires skills the Common Core curriculum is aiming to improve.

Editorial By The LA Times editorial board | http://lat.ms/18wHami 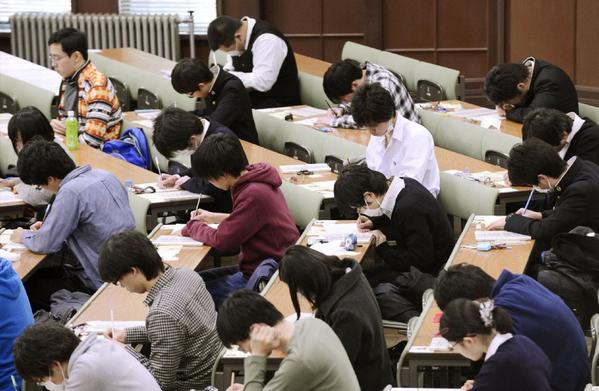 Students take the National Center Test for University Admissions at the University of Tokyo earlier this year. Students from Shanghai, Hong Kong, Singapore, Taiwan, Japan and South Korea were among the highest-ranking groups in math, science and reading in test results released last week by the Program for International Student Assessment. (Kyodo News / Associated Press)

December 9, 2013  ::  The standardized tests known as the Program for International Student Assessment are considered so important that when the latest results were released last week, the U.S. Department of Education participated in a so-called PISA Day.

The leaders of the nation's teachers unions immediately fired off news releases asserting that the mediocre PISA scores of American students showed that more than a decade of testing-based reform had failed our schools. Prominent reform leaders, by contrast, concluded from the test results that the U.S. was failing to change schools radically enough to aid its most disadvantaged students. Still others predicted that the U.S. economy would crash and burn because of our students' unimpressive math scores on the PISA exams compared with other countries' students. (American students ranked above the median in reading and science but below it in math.)

A saner interpretation of the PISA results came from researchers who have studied international rankings in great detail, and their message goes something like this: Calm down, everyone. The results on this and other international tests are more complicated than they look, and in this case, nuance makes a difference. Despite the doomsday talk, the scores a country receives on the PISA don't necessarily predict the strength — or weakness — of its future labor force or the trajectory of its economy, according to Martin Carnoy, a professor of education at Stanford University. Some countries with relatively low scores have built thriving, tech-based economies, while the economies of some high-scoring nations have faltered.

And the results on the PISA, administered every three years to 15-year-olds in 65 countries, tell us as much about cultural differences as about differences between school systems. In the Asian countries that took the top spots — including Singapore, South Korea and areas of China — families spend heavily on private tutoring to prepare their children for college entrance examinations that closely resemble the PISA tests, Carnoy said. So the high PISA results don't necessarily reflect on their schools.

The reasons that some countries do well (or poorly) are complicated. Finland, for instance, has historically been successful on the PISA tests — so much so that governments, including California's, have sent delegations there to figure out the educational magic. And Finland has been successful despite the fact that, unlike in Asia, testing is de-emphasized and recesses during the school day are long. But Finland also is a country with relatively few disadvantaged children, largely because of the nation's social welfare network. And disadvantaged children, no matter what the country, fare worse on the PISA tests than students from more educated and affluent families. A Stanford study last year found that non-school factors such as the number of books in students' homes accounted for more than two-thirds of the variation in scores on high-profile international tests like PISA.

A study published this year by Carnoy and Richard Rothstein, a researcher at the Economic Policy Institute, found that much of the difference between U.S. scores and those of high-ranking nations is because the United States has a higher proportion of disadvantaged students. But the researchers found that the scores of the most disadvantaged U.S. students have been improving markedly over the years, while scores for their counterparts in many top-ranked nations have fallen precipitously.

In contrast, the highest-scoring U.S. math students are nowhere near their peers in top-ranking countries, Carnoy said.

Though curriculum itself isn't a cure-all, the Common Core curriculum, which California and dozens of other states are beginning to implement, should help. It is more closely aligned to the kind of conceptual understanding and deep thinking that is both called for on the PISA tests and required for true innovation.

If there is a lesson to be gleaned from PISA, it's that moving toward a more educated nation will require helping families give their children the resources and background they need to do better in school, as well as continuing reform efforts to improve instruction and curriculum. It requires committed action over time, not warring and self-serving pronouncements.

PISA tests fifteen year olds. In the US: Ninth graders.  The first year of high school. The first year we start counting credits towards graduation. The year we yank away the comfortable classroom rug of social promotion, there since kindergarten. This is the most problematic grade in American public education – and the grade with the most students in it because of the number of kids who get retained in Grade 9 because they didn’t get enough credits to advance into grade 10. These kids are called 9-Rs and in some schools they count for more than a third  of the 9th grade population.

At fifteen one’s hormones rage. Focus is difficult, sleep is elusive and you are like a puppy with huge feet and your body changes and (unless you are in a school with an enlightened sex/health ed component instead of abstinence and a pamphlet about STDs) you start working on some of the mysteries without any clues.

Everyone’s looking at you and you have the wrong shoes/backpack/hair color/physique. That man can’t be a man because he doesn't smoke the same cigarettes as me. You are a marketeer’s dream and that boy/girl in your English Class is so hot! And your mom is telling you that these are the best years of your life and it so sucks.

By fifteen in the Asian tiger economies they have sorted out the successful kids from the unsuccessful ones already.  You are either already in a competitive college prep program …or you’re not.

In Finland – where they do educate everyone - everyone is middle class and white and – well – Finnish. Everyone has medical and dental and mental healthcare. If the school thinks you should have an iPad of course you have an iPad. Or glasses. Or a tutor to help with algebra.

In America we have everyone on a college track too. And the ones who don’t make it – whether because they are poor or unmotivated or don’t get help or are not reading at grade level/not proficient/Black/Brown/American Indian/struggle with the language/are in foster care or just don’t “get” algebra -- the ones who don’t graduate are labeled failures.

The tragic significant subgroup. Put ‘em on the spreadsheet.

Remember Scrooge and The Ghost of Christmas Present?

‘This boy is Ignorance. This girl is Want. Beware them both, and all of their degree, but most of all beware this boy, for on his brow I see that written which is Doom.'

`Have they no refuge or resource.' cried Scrooge. ’Are there no prisons?  Are there no workhouses?’

Yes, Mr. Scrooge, there are.

Welcome to the pipeline.