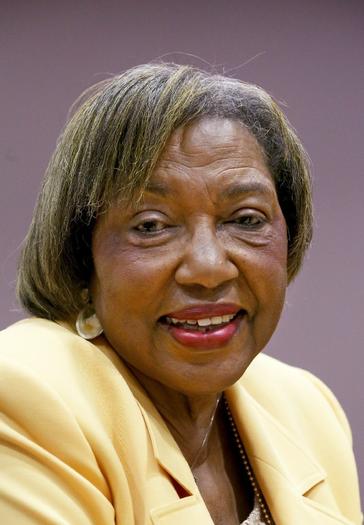 (for family and close friends)

Time and location to be announced

Marguerite Poindexter LaMotte was born on July 17, 1933 in New Orleans, the youngest of seven children, to Leon and Amy Poindexter. She flourished in a segregated Louisiana school system and graduated from Xavier Preparatory High School and the YMCA Business College in New Orleans.  At age 18 she was appointed Director of Spaulding Business College in Baton Rouge.  She took classes on a part-time basis at Southern University and was awarded the B.A. degree in Education, Summa Cum Laude in 1961.  She completed her Master of Education Degree in 1965 from Louisiana State University.  She was the first African-American woman to serve as Visiting Professor, LSU Undergraduate School of Education.

In 1973 she relocated to Los Angeles and described her first teaching assignment in the Special Education Department at Drew Junior High as one of the most rewarding of her life.

In 1988 Ms. LaMotte was promoted to Director of Secondary Instruction in Administrative Region C.  She also served Region C as Administrator of Operations. With the District’s reconfiguration in 1991, she requested to return back to the schools, “back to the real action working directly with and positively changing the lives of the students.”  She was assigned as Principal to Washington Preparatory High School.

Under LaMotte’s direction Washington Prep received Outstanding Accreditation Review by WASC for a maximum 6-year period.  LaMotte credited the school’s staff with developing and producing an innovative school-wide Study Skills Program which provides each student with a focused 2-day exposure to the basic study skills needed to be successful and productive.  In addition the implementation of standards-based lessons, a continuing effort of all departments, placed Washington in the forefront with common lesson plans for curriculum mapping.  LaMotte’s staff considered her the “founder” of the Theater Arts Academy at Washington Preparatory High School.

The former teacher, counselor and principal was elected to serve District 1 of the LAUSD Board of Education in 2003.  She was re-elected in 2007 and 2011.  LaMotte represented a geographically and ethnically diverse area, including Palms, Mid-City, Baldwin Hills, Pico Union, Jefferson Park, Vermont Knolls, Gramercy Park, Exposition Park, North University Park, Gardena and much more.

She made her transition on Thursday, December 5, while attending an educational conference in San Diego.

She was preceded in death by her parents, brothers, Frank and Willie Poindexter and sisters, Elodia Rogers and Alma Ferebee.  She leaves to cherish her memory, a son, Dale LaMotte of Little Rock, Arkansas, daughter, Faye Landry of Los Angeles, three grandchildren: Christopher, Clayton and Danielle; brother, Leon Poindexter of Houston, Texas, sister, Juanita Shepherd of Katy, Texas; faithful companion, Melvin Morris and a host of relatives and friends.