STUDENTS ONLY KNOW A FRACTION OF MATH TEACHER’S GOOD DEEDS

Jim O'Connor is a strict disciplinarian at St. Francis High, so it wasn't until students volunteered to help with a blood drive that they discovered he had a gentler side. 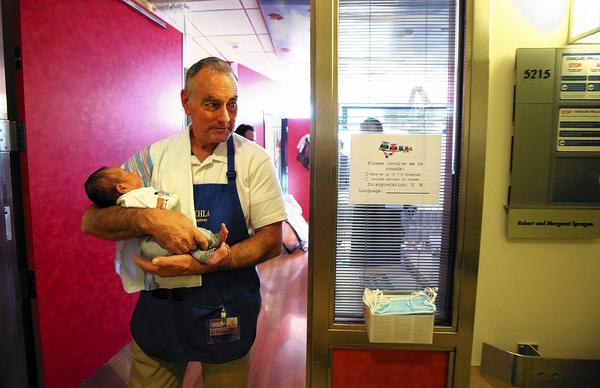 In his algebra and calculus classes at St. Francis High School, he is stern — no excuses, no coddling. "If you look at the clock," said senior Michael Tinglof, who had O'Connor in his freshman year, "you're on his bad list for the rest of the class."

The 70-year-old teacher's look also is all business: spine straight, close-cropped silver hair. When he cracks a joke, he's so deadpan that the boys often miss it, senior Pat McGoldrick said.

"Like in our class, he'll put a problem up on the board and then someone will say, 'Oh, can you do it this way?' And then he'll respond, 'Oh yeah, I'll just do this and I'll just change that and I'll do all this extra work and I'll get the same answer. It's totally worth it.' "

Until they get accustomed, Pat said, "everybody thinks he's being really mean."

For the record, O'Connor embraces the reputation. "You want to teach a class with 30 boys, you've got to be strict," he said.

Michael and Pat might never have found out how little they really knew about their teacher if they hadn't signed on this year to recruit donors for a school blood drive.

One afternoon, the boys took a field trip to see where the donated blood would go. In the hallways of Children's Hospital Los Angeles, they were greeted like VIPs because they were associated with one.

"He was like a celebrity there. Everybody knew his name," Pat said of O'Connor.

They discovered one reason when they went to the hospital's Blood Donor Center, which has a plaque ranking the top donors. O'Connor's name is engraved in the top spot, 50 gallons — though that total is way out of date.

Since he first gave blood at Children's Hospital in 1989, at the urging of a friend's wife who was a nurse there, O'Connor has donated more than 72 gallons of blood and platelets.

That enormous gift — worth well over half a million dollars had it been purchased — has been especially valuable because he is a universal donor. His O-negative blood can be given to people of all blood types. It can be used for newborns and, in an emergency, before a victim's blood is typed.

Once a month without fail, O'Connor arrives at the hospital's donor center to give platelets, which are vital for cancer patients undergoing chemotherapy, and for those who have had open-heart surgery or bone-marrow or organ transplants. It can take about two hours for a machine to draw his blood, separate out the platelets by centrifuge and then return the remaining components to him.

O'Connor also gives blood every other month, which is as often as regulations allow. He's been the hospital's top donor for years — by a long shot.

O'Connor grew up in New York. He served in the Navy during the Vietnam War, doing electrical work on an aircraft carrier. Before becoming a teacher, he worked deep in the Holland and Lincoln tunnels as an electrician for New York's Port Authority.

College came late for him — and took a while to complete. He started with night school, graduated at 30 and came to California in 1973 to be an engineer at Hughes Aircraft. He coached youth sports on the side and enjoyed it so much that he decided teaching was what he should do with his life.

He spent a decade at St. Francis in La Cañada Flintridge, starting in 1976, before a 20-year stint at Harvard-Westlake. Rather than retire, he arranged to return to St. Francis part time. His schedule alternates from Monday, Wednesday and Friday to Tuesday and Thursday.

When he's not at school, he's usually at the hospital.

Before O'Connor ever set foot in Children's, he had given blood regularly at Red Cross drives, never knowing where his donations would go. But when he took a tour of the hospital wards, what had been an abstraction turned personal.

He saw newborns who had had major surgery, toddlers undergoing chemotherapy, parents under strain as their children's hospital stays stretched from days to weeks to months.

It didn't take long for him to ask what more he could do to help.

O'Connor has never married. He doesn't have children. He was nervous at first, he said, especially about infants with tubes and wires attached, unhappy and sore after major surgeries or trauma.

Now, the nurses say, he is the one they turn to in the toughest moments. They have called him in to sit with babies who are dying and whose parents are too traumatized to be present.

"No matter how sick they are, no matter how devastated, he's just so caring, he brings such a warmth and peace," said Jeri Fonacier, a nurse in a general medical surgery unit on the fifth floor.

The St. Francis boys heard that and much more when they visited the floor.

Before seeing this side of their teacher, Michael said, "we heard rumors. 'Mr. O'Connor holds babies.' I'm like, 'What? I don't see that. No, I don't think so.' "

"I mean, if you really think about it, his whole life is service," Pat said. "Half the week he's teaching, giving knowledge to his students, and the other half, he's donating blood and giving his time to children who need it most. It's pretty amazing."

So will news of O'Connor's alter ego be kryptonite to his classroom control?

Ask him at the right moment, and he could not care less.

"When I hold a baby, my blood pressure goes down. I have to concentrate. Nothing else matters," he said on a recent afternoon as he stood holding a 4-week-old boy, who was twitching in a fuzzy blue onesie decorated with polar bears.

Moments earlier, the baby had been wailing. But then O'Connor lifted him into his arms and started to sway.

Eyes shut. The tiny body stilled. The hospital room was silent but for the strict math teacher who cooed, "Oh my goodness, what a face, what a face."

You feel kinda dumb drinking your morning coffee and reading the paper on your Kindle when you find yourself a little misty-eyed reading about a math teacher. Dumb in a good way.