By The Times editorial board | http://lat.ms/12GXDpj 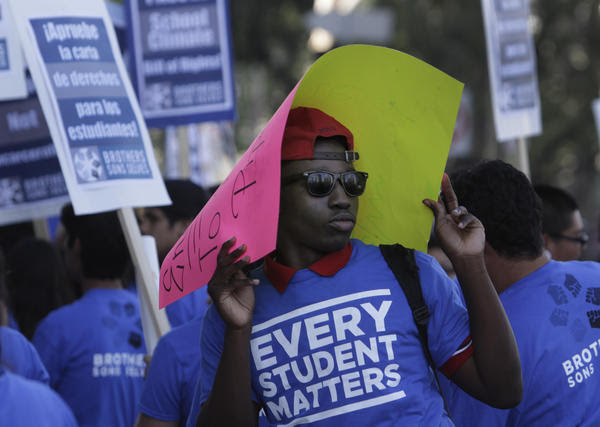 Money is flowing again to the Los Angeles Unified School District after years of budget cuts and officials must decide how to spend the money. Above: Marshawn Martindale, from Crenshaw High School, rallied outside a school board meeting in May. (Los Angeles Times / May 14, 2013)

June 18, 2013, 5:00 a.m.  ::  After four very dry years, money is finally flowing again to Los Angeles Unified schools. Next year's budget already is set, but for the three years after, there appear to be almost as many ideas for using the funds as there are actual dollars. Union allies put new hiring at the top of the spending list. The superintendent wants to raise salaries instead. The board president is more interested in extending the school year. Who would have guessed spending money could be this hard?

In a school district that needs extra teachers and tutors, extra campus security, preschool and after-school programs, extra everything, practically all of the ideas on the table have at least some merit. And many of them — too many of them — will come up in the form of resolutions at Tuesday's school board meeting. There should be hiring, to be sure. Too many librarians were cut during the downturn, and the number of guidance counselors must be boosted as well if the district wants to succeed with its new policies that raise graduation requirements and call for sending more students to college.

But one of the resolutions, promoted by board member Bennett Kayser, calls for restoring some staffing to pre-recession, 2007-08 levels. That makes no sense because L.A. Unified no longer has a pre-recession student population; the number of students has dropped by about 100,000, or 15%. Kayser also wants to reduce class sizes, but although that might be appropriate in some cases, Supt. John Deasy points out that research doesn't back up the value of smaller classes until they drop to 18 or fewer students, a level that L.A. Unified can't achieve. Another resolution by Kayser calls for a series of public budget meetings and also requires the district to confer with its unions on their ideas for spending money, and even to solicit the opinions of student body presidents. That's just silly. Some public hearings are necessary, of course, but let's not turn the budget into a giant administrative headache.

After years of leaner incomes due to unpaid furlough days, teachers and other staff deserve more money — but the smartest way to do that may be through the resolution that board President Monica Garcia has advanced, increasing the length of the academic year and paying teachers for the added work days. There is proven benefit to students in having more instructional time.

At the moment, the budget is in danger of being resolutioned to death, especially since most of the items on the agenda call on Deasy to investigate, come up with plans and report back. As Deasy's bosses, board members are supposed to voice their wish lists and set priorities. That's different from micromanaging how many students he has to confer with or how many janitors he has to rehire.

smf: The Times is right, the Board of Ed is Deasy’s boss – they need to boss him around a bit.

Either or neither Disraeli or/nor Mark Twain said: "There are three kinds of lies: lies, damned lies, and statistics."  The argument that there is no research to prove reducing class size improves student outcomes is a damned lie…or a damnable one.

This is equivalent to the schoolyard bully shouting; “Oh yeah?  Ya can’t prove it!”

Actually, we can: The success  of QEIA schools – which paid low performing schools to reduce class size - is the most recent example. QEIA schools succeeded where all the other forms of ®eform: Reconstitution, Charters, Public School Choice, Partnership Schools, did not.