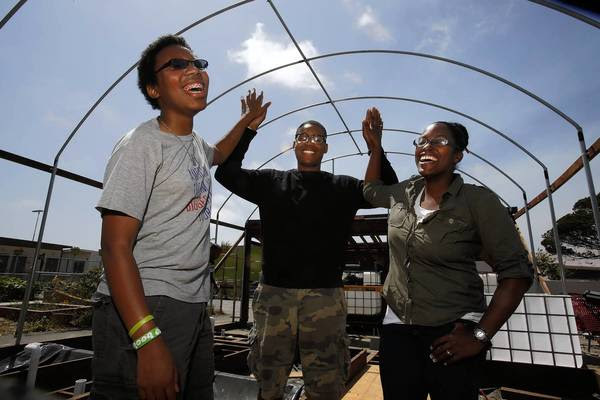 June 2, 2013, 8:38 p.m.  ::  A plastic drink dispenser filled with a brilliant green liquid sat on the classroom counter, but no one dared take a sip. The murky water contained goldfish, and a small hose carried its waste into a container full of leafy greens.

"It's a self-sustaining aquaponic garden," said Jordan Keligond, a sophomore at Westchester Enriched Sciences Magnet High School, as if it were as common as a toaster. The waste gives off nitrogen for the lettuce to grow, and in turn, the plants provide filtered water back to the fish.

Keligond and his seven teammates created the garden to address communitywide issues such as obesity and limited access to healthful food. The group enlisted the help of the school and its community to expand the garden and sell its produce at an on-campus farmers market.

Their team is one of three from L.A. Unified schools that competed among 20 high schools to present their proposals at the Aspen Ideas Festival in Colorado this summer. World-renowned inventors, explorers and artists spoke to the students in the so-called Aspen Challenge to encourage them to develop solutions to social problems.

While working on Gallo's challenge for seven weeks, the students from Downtown Magnets High School's team didn't set foot on a beach. Instead they took the issue inland.

"As inner-city kids, we didn't feel a connection to the ocean," said Julissa Colindres, a member of Downtown Magnets' OCEAN Los Angeles team. "We thought the community might feel the same way," so they planned street cleanups and set up booths at area art walks to raise awareness about the hazards of leaving trash on the street, even something as small as a cigarette butt.

The magnet buses in students from different neighborhoods, but the team believed that some concerns transcend ZIP Codes.

"In South Central, I feel that people do care [about the ocean], but they don't know how to care," said Shannon Stubblefield, who lives in South Los Angeles. "I always thought there were dolphins in the gutters," she said about the "No dumping" signs on sidewalks. "I didn't know what they were there for."

The group met with people in Echo Park and Chinatown to inform them that tons of waste ends up in the ocean, and they introduced ways everyone could reduce litter.

"The problem isn't at the beach, it's here," senior Jennifer Vanegas said.

Instead of preaching the virtues of science or building robots to demonstrate their enthusiasm for technology, they developed a curriculum for younger students and helped them build gardens.

She and the Taft Transcendentalists tilled soil, built low walls and helped students from kindergarten through third grade plant vegetables. The team created a take-home packet with coloring activities and recipes using ingredients from the garden.

"None of us realized the magnitude of being part of the Aspen Challenge," said Mia Brumfield, a senior at Westchester. The seven weeks spent figuring out how to fight obesity and highlight a healthful diet on campus were rewarding, but "the biggest prize for us is to be recognized and have people of such a high caliber listen to our ideas."