Lawmakers and Gov. Jerry Brown announce a $96.3-billion deal, with new spending on welfare grants, tuition aid and dental care for poor adults. But they agree to pare some outlays until next year. 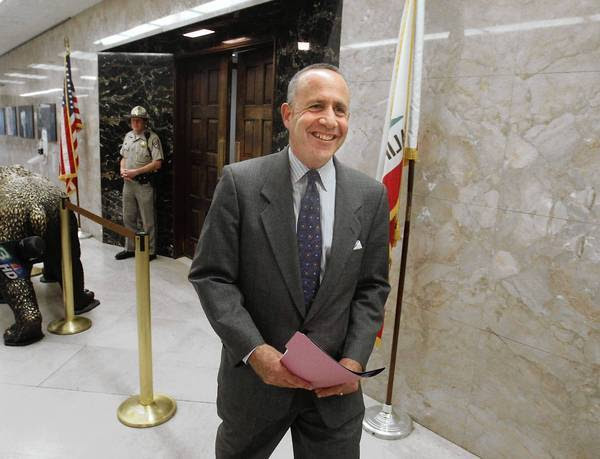 Senate leader Darrell Steinberg is all smiles as he leaves the governor's office after a budget meeting with Jerry Brown and Assembly Speaker John Perez. Steinberg said Democratic leaders are closing in on a budget deal "that I think accomplishes all of the things that we have sought to accomplish." (Rich Pedroncelli / Associated Press / June 10, 2013)

June 11, 2013, 9:50 p.m.  ::  SACRAMENTO — The budget deal that lawmakers will vote on this week is an effort to mesh financial restraint with a desire to provide more social services and healthcare for the needy — giving the state's economy extra time to recover before some of the spending kicks in.

The $96.3-billion deal, formally announced Tuesday by Gov. Jerry Brown and top legislators, sets the stage for hundreds of millions of dollars in new spending on welfare grants, tuition aid for university students and dental care for poor adults in future years.

But the lawmakers agreed to hedge their bets on the recovering economy by paring back some proposals and holding off on some expenditures until next spring or summer.

That way Brown, who was concerned about opening the spending spigot, can say he made good on his promise of fiscal prudence and Democratic legislators can highlight plans to restore spending — albeit delayed — as a success in their quest to rebuild the state's social safety net after years of deep cuts.

"We are in a slower recovery than has historically been the case," Brown said at a Capitol news conference. "We're tempering the spending to the flow of the new funding."

But Republicans said the budget would put the state on course for unsustainable spending increases.

"It's the mullet budget," said Assemblyman Jeff Gorell (R-Camarillo). "It's conservative up front, but it's liberal in the back."

In addition to restoring some social welfare services, the spending blueprint includes plans for revamping education funding and healthcare.

Some money will be shifted from wealthier schools to districts with high numbers of poor students and English learners. And state officials are preparing an expansion of California's public healthcare program as part of the federal overhaul initiated by President Obama.

There's also money for energy-efficiency projects at schools and community colleges, paid for by a change in the corporate tax code approved by voters in November.

The budget holds $1.1 billion in reserve, but no money is allocated for the state's rainy-day fund. H.D. Palmer, a spokesman for Brown's Department of Finance, said officials are still calculating any surplus that might be expected.

The budget must be approved by the full Legislature by Saturday and signed into law by the governor before it can take effect July 1. Lawmakers are on track to meet their June 15 deadline for the third year in a row.

Jerry Nickelsburg, senior economist at the UCLA Anderson School of Management, cautioned that California's finances are notoriously hard to predict, and changes in the stock market or personal income could force state leaders to recalibrate their plans.

Even though revenue has exceeded expectations in recent months, "expansions don't go on forever," Nickelsburg said. "The state's revenue is very volatile, and at some point it's going to turn down."

Brown held firm on his revenue estimate, which is more conservative by billions of dollars than the one from the Legislature's nonpartisan budget analyst. But to find room for the new spending that lawmakers wanted, he accepted more optimistic estimates for property-tax receipts, freeing up about $300 million.

The governor also lowered his estimate for the cost of implementing the federal healthcare overhaul, providing an additional $80 million.

In addition, Brown reduced his plans to repay money owed to schools from previous years by roughly $650 million, delaying his effort to chip away at what he calls the state's "wall of debt."

All of the shifts allowed lawmakers to include more money for career training, new school curriculum standards and other programs.

Some of the new spending, such as $140 million for mental health, won't be permanent. But other increases will be and are primed to continue climbing in future years.

For example, higher spending on the state's welfare program would start at $50 million in the new budget and triple the following year. It could eventually rise to $1 billion annually under a framework included in the new budget.

Assembly Speaker John A. Pérez (D-Los Angeles), who pushed for the welfare increases, said the budget deal "reflects the values and priorities of Californians."

He added, "We're back in the position of making long-term plans for our state."

Also announced Tuesday was a tentative agreement between Brown and California's largest state worker union to grant raises to its members. That deal would increase pay for roughly 95,000 [SEIU Local 1000] workers by 4.5% by July 2015.

Negotiations are still underway with unions representing tens of thousands of other state workers.

A simplified, fairer formula for funding the state's schools could become his great legacy. 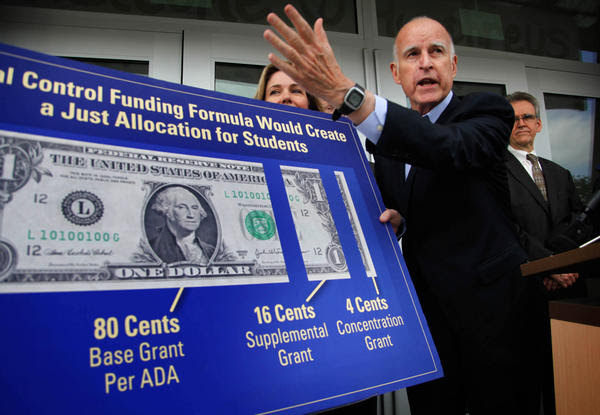 Under Gov. Jerry Brown's school funding plan, schools will receive a specified base payment for each student. Above: Brown hosts a news conference at Humphreys Avenue Elementary School. (Los Angeles Times / May 17, 2013)

June 12, 2013  ::  Many factors are relevant in determining how much the state should spend to provide a child with an "adequate" public education, but this is not one of them: whether the child lives in an area that was largely agricultural during the early 1970s. Yet agricultural zoning is, to this day, a significant component in the stupefyingly complicated formula that determines California's per-pupil funding. Everyone knows the formula is a mess, but for decades the Legislature did nothing to change it.

Now, taking advantage of an unusual moment in state budget history, Gov. Jerry Brown has sliced through the paralysis and reached a compromise with legislators to create an immeasurably more sensible, comprehensible and fair formula for funding schools. It could well become the great legacy of his administration.

The new, simplified formula is based almost solely on the one factor that should matter: what students need. Under Brown's plan, schools will receive a specified base payment for each student. Because disadvantaged students need more money — for preschool, tutoring, campus security and other expenses — to close the achievement gap, schools will receive 20% more for each student who is either poor enough to qualify for a subsidized school lunch or not fluent in English. There is an additional "concentration" payment for districts in which more than 55% of the students are disadvantaged, which will be of special benefit to the Los Angeles Unified School District. And the state will give local school officials more freedom to decide how the money should be spent, though there will still be a pot of additional funds for special education.

Before the recession, changing the formula would have been politically difficult at best; giving more money to some schools would inevitably have meant cutting funding for others. But almost all public schools suffered during the state's budget crisis, laying off teachers and cutting the length of the academic year. With new revenue available this year, Brown saw his moment. He could afford to give more money to all schools while at the same time pressing the restart button on the funding formula.

Brown's initial proposal, though the concept was solid, overreached by providing a full 35% for each disadvantaged student, leaving too little money to help moderate-income schools struggling to get back to pre-recession funding levels. Pressed by legislators, he has now agreed to a formula that will help districts statewide recover more quickly.

There will almost certainly be mistakes and gaps in the new formula, and both the governor and Legislature should be flexible about fixing them, rather than leaving districts gasping for help as they did in decades past under the old formula. But with his decisive and, yes, stubborn insistence on fixing what was so badly broken, Brown will have helped the state's neediest children for decades to come.