A.J. Duffy’s career in education ends after two years at Phoenix High, working with students who need a second chance. He said he could relate. 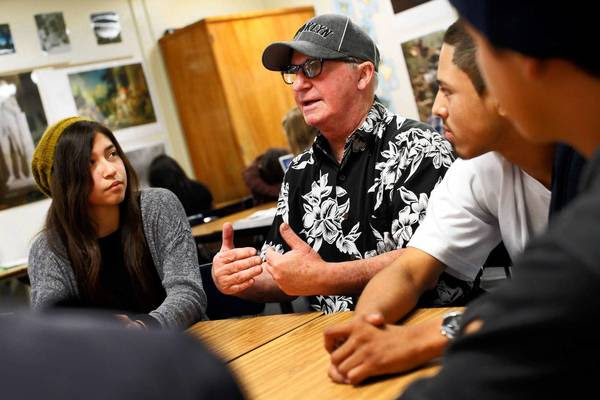 IN A BALLCAP & HAWAIIAN SHIRT…?   A.J. Duffy -- dressed considerably more casually than on his first day in the classroom in 2011 -- chats with students Emily Cedeno, 17, Jesse Chavez, 19, and others at Phoenix school. The former head of the L.A. teachers union retired from his career in education last week. (Barbara Davidson, Los Angeles Times / June 6, 2013)

June 8, 2013, 6:19 p.m.  ::  The lineup of must-see videos for the high school class on public speaking was notable: Hitler, Martin Luther King Jr., Mussolini, President Obama — and A.J. Duffy, the former president of the L.A. teachers union and also the instructor.

There, Duffy, 69, retired Friday, after two years of working with students who needed a second chance.

But his personality has hardly become retiring.

"He does not know how to delegate and his door is usually closed," Duffy said.

(Fletcher had been a Duffy critic back in the day.)

Duffy also vehemently objects to any linking of teacher evaluations to student test scores — a provision teachers voted to accept this year under pressure from a court order.

As president, Duffy had been an omnipresent, polarizing figure: a vain, cartoonish union boss to critics; a passionate defender and loyal friend to supporters.

His prime directive had been to push for teachers and parents to have real authority at schools, and he made progress to that end. But those gains, he said, are under threat from the district's middle-management bureaucracy, which, he said, is prepared to outlast current L.A. schools Supt. John Deasy.

After term limits ended Duffy's six-year run as union president in 2011, he'd hoped for a top management job leading reform efforts under Deasy, but the superintendent had others in mind.

Then, Duffy was set to be chief executive of a unionized charter school, to demonstrate that charters and unions could collaborate. But the school fell short of enrollment targets and its board folded the CEO duties into those of the chief academic officer.

So Duffy returned to the classroom for his first extended stint since the mid-1990s, in part because he had bills to pay and because he wasn't ready to walk off the stage, even if that stage was an out-of-control classroom on the second floor of an out-of-the-way campus.

"Everyone was doing what they wanted to do," student Jesse Chavez said of the first day Duffy walked in. "I was sitting in the back laughing."

All were struck by Duffy's trademark look: suit and tie, two-tone tan and brown dress shoes.

"He was suited and booted," said Jesse.

"He looked like the Penguin from Batman," Manny Mora offered.

"Don Corleone," thought resource teacher Kate Mitchell, looking at her new colleague. Mitchell, an award-winning teacher, later had to tell Duffy off sometimes for interrupting her work or ordering her around.

"What have I gotten myself into?" Duffy wondered.

Most of his job involved supervising independent work for social studies subjects. Students attend Phoenix because they fell behind in credits, don't fit in elsewhere or got into trouble.

Mia Carrillo recounted how she derailed in eighth grade, when she got a felony conviction for breaking into her middle school. In ninth grade, she said, she became a heavy drug user and stopped going to school.

But things turned around at Phoenix: "People don't judge; they accept you. It's like a big, big family."

Duffy could relate. He has said he spent several years as a heroin addict and he didn't progress beyond third-grade reading skills until his mid-20s. He would read the same five books over and over — three on world history and two on World War II, carefully working out each word.

Later, as union president, he insisted that his staff critique his speeches and interviews. He also listened to tapes and corrected himself.

He settled on public speaking as an elective to offer students, using speeches from his own career to talk about what he had tried to achieve.

In a speech after being elected union chief, for example, he'd said his wife was the only one who always believed he would win and that she was the "first lady of his heart."

"You can get people on your side," Duffy explained. "Right away, they see that this guy loves his wife and he's not afraid to put it out there.... As union president, there were things I did that most didn't like; but if they liked me, this was something to fall back on."

He also showed the students video of Mussolini, the Italian dictator: "I wanted them to see the arrogance, how convincing it was."

In their own speeches, students talked about body image, bulimia, their parents' deaths, getting into trouble, admiration for an older brother, a love of reggae music.

Jesse used to get into fights and ditch school, but he's aiming for college now: "Mr. Duffy kind of convinced me I have a brain in my head."

"I saw so much growth in these kids," Duffy said. "I would tell the kids regularly: 'If you thought this was about public speaking, I lied to you.' It was really about self-actualization. Where are you going? Where do you want to be? And what skills do you need to get to where you want to be?"

Last week, Duffy pointed around the room, praising students one by one: Manny for overcoming his defiance, Emily Cedeno for opening up, Esperanza Ortega for her poetry.

"Under no circumstances should people think these kids are not as smart as other kids," Duffy said. "This was the perfect place for me to end my teaching career because I couldn't fit in, either, and there wasn't a place like this for me."