The mayor vowed to turn the district into an incubator of education reform. In his two terms, during which his nonprofit took over more than a dozen campuses, he's had mixed results. 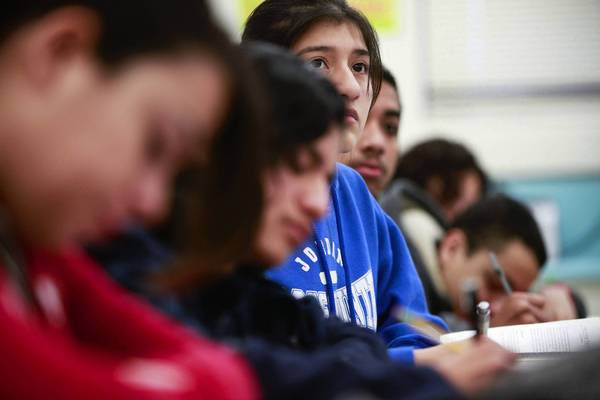 Jordan High student Alejandra Suarez, center, met L.A. Mayor Antonio Villaraigosa during his visits to her school. This fall, she’ll be the first in her family to go to college. (Bethany Mollenkof, Los Angeles Times / January 23, 2013)

June 27, 2013, 7:40 p.m.  ::  In the middle of Watts, at one of the worst-performing high schools in Los Angeles Unified, Mayor Antonio Villaraigosa was in his element.

As he sat with Jordan High students late last year, he shared snippets of his life story, as he's done during scores of school visits during his eight years as mayor. He was raised without a father, was kicked out of one school and dropped out of another before graduating from Roosevelt High with a 1.4 GPA — because his mother and a teacher believed in him, he told students.

No other issue has stoked the mayor's personal passion as much as public education. Despite lacking any formal authority over the nation's second-largest school system, Villaraigosa has left a major imprint.

Soon after taking office in 2005, he tried to take control of L.A. Unified. When that ambitious effort failed, the school board allowed a nonprofit foundation he created to manage more than a dozen low-performing schools. He raised millions of dollars and vowed to turn the schools into incubators of reform.

His nationwide fundraising also helped elect a loyal school board majority that installed superintendents he favored. Through them, he has pushed for a brand of reform that includes tying teacher evaluations to test scores and providing more choices for parents, such as charter schools.

Along the way, the onetime teachers union organizer has confronted his former allies by challenging seniority-based layoffs and advocating a higher bar for tenure. He blasted the United Teachers Los Angeles union as "the one unwavering roadblock" to improving public education.

As he leaves office, Villaraigosa points to successes: an increase in the graduation rate to 66%. A doubling in high-performing schools, as measured by the state's Academic Performance Index, which is based on standardized test scores. An explosion in publicly financed, independent charter schools.

A Times analysis found a mixed record at the schools his nonprofit controls. Overall, the mayor's schools have performed comparably to district schools with similar demographics. Some of his schools, notably 99th Street Elementary, have seen significant improvements. But others, such as Gompers Middle School and Roosevelt High, have seen comparatively modest gains.

Villaraigosa sometimes exaggerates his effect: He has taken credit for the district's massive school-construction program, although it was firmly established by the time he took office. Overall, L.A. Unified has improved slightly faster than the state, but test scores remain below the state average. And the district's upward trend began before Villaraigosa became mayor.

L.A. Unified schools controlled by the mayor showed a range of results in the percentage of students scoring proficient or above in English and math in 2012.

"The biggest impact Villaraigosa has had is simply changing the conversation," said Dan Schnur, director of the Jesse M. Unruh Institute of Politics at USC. "The fact that there is a debate in Los Angeles about charters and choice, about teacher support and evaluation, is due to the mayor's use of the bully pulpit."

Villaraigosa followed in the path of former Mayor Richard Riordan, who helped elect a school board that replaced a superintendent, launched the nation's largest school construction program and returned phonics to classrooms.

School board President Monica Garcia, a close ally, praised the mayor for "having the guts to do what's really hard … fighting for better in a very difficult time."

The mayor's combative style, however, has alienated key players, starting with teachers, said school board member Steve Zimmer, who beat back a Villaraigosa attempt to unseat him.

"I don't think that he's wrong in insisting that every child has a right to an excellent teacher every day," Zimmer said. "The difference is really in the pathway. Not enough care was taken to make sure that teachers felt supported."

Villaraigosa's odyssey into education began haltingly and only at the instigation of others. His pledge to take over L.A. Unified in his second bid for mayor was among a series of one-upmanship moves with incumbent James Hahn over education.

The state takeover law was challenged by the school board and ruled unconstitutional by an L.A. County Superior Court judge in 2006.

By that time, however, the mayor's Plan B was already in progress. He set out to seize de facto authority by helping elect a school board majority in 2007.

The new board quickly agreed to hand over Locke High to a charter school operator, Green Dot Public Schools — the first time L.A. Unified had made such a move. The board also approved scores of start-up petitions and renewed nearly all charters that came before it, giving the district 201 independently operated charters, the most of any school system.

The mayor's Partnership for Los Angeles Schools took control of 15 of the district's lowest-performing campuses. Villaraigosa helped raise $72 million for the effort.

Without his commitment, philanthropist Melanie Lundquist said, her family would not have pledged $50 million over 10 years, resources that benefit some of the city's neediest students through teacher training, computers and more.

As part of the effort to recruit strong leaders, for example, Villaraigosa personally called then-Monrovia principal Traci Gholar, an administrator his team wanted on board. Gholar said Villaraigosa's support for schools was "pretty significant" in her decision to take a job at one of his schools.

But some critics, including former state Sen. Gloria Romero, said Villaraigosa should have focused more attention on helping all district schools.

"It became a conversation about his schools versus the rest," she said.

Some partnership initiatives have spread to the district at large, such as a new school report card, wider testing to identify more minority students as academically gifted and a parent training program.

Elise Buik, president of United Way of Greater Los Angeles, said the mayor's leadership deepened the nonprofit's own education involvement. In the last five years, United Way has donated about

$8 million for after-school programs and training for parents and middle school principals — one of many community organizations now allied with the mayor.

They applauded a landmark lawsuit, supported by Villaraigosa, that allowed district officials to prevent seniority-based layoffs from disproportionately harming campuses.

Many teachers opposed this attack on their job protections and believe Villaraigosa also reneged on promises to give them substantial control at partnership schools. And a "top down" approach districtwide left parents feeling cut out of major decisions, said Ingrid Villeda, an elementary teacher and union activist.

Santee teacher Jose Lara said the partnership has supplied teachers at his high school with laptops and protected them from a charter-school takeover. But otherwise, he said, the experience has been one of "broken promises" and "photo ops."

In an interview, the mayor extolled teachers but offered no apologies for actions that angered many of them. "Change comes when you're willing to mix it up and push hard," he said. "I don't ask for forgiveness in standing up for these kids."

By most indications, incoming Mayor Eric Garcetti plans to tread an involved but less confrontational path, which worries Villaraigosa allies. They view the local reform mission as a battle against opposing interests that needs to be won.

Villaraigosa said he intends to remain involved in influencing school board elections. That effort stumbled this year when a backlash against donations by wealthy out-of-towners, including New York Mayor Michael Bloomberg, contributed to the defeat of two of the three candidates Villaraigosa endorsed.

The mayor also said he will continue to raise money for the partnership and push for policies that could transform student lives.

"Every time I go to these schools," he said, "I look in their eyes and I see me."

Alejandra Suarez, 17, has met the mayor a few times at Jordan High. Before key exams, she followed his advice — she looked in the mirror and said: "OK, I believe in myself. I can do it."

And she did. This fall, the daughter of Mexican immigrants will be the first in her family to attend college: UC Berkeley.