Not a `poverty lottery'? - SCHOOLS LAMENT TITLE ONE FUNDING LOSS

Had just a half-dozen more students at the Sherman Oaks Center for Enriched Studies applied for free or discounted lunches, the magnet school would have qualified to continue receiving federal money for campuses with high numbers of poor youngsters.

Instead, under tighter guidelines passed this week by the Los Angeles school board, SOCES will no longer qualify for Title I funds, blowing a $400,000 hole in its budget for the 2012-13 school year.

"When I heard we were losing Title I money and I heard it was nearly $400,000, I knew we were sunk," said Alex Wald, who has two children at SOCES and is active in the school's PTA. "There's no way we can raise that."

SOCES is among nine campuses in the San Fernando Valley among 23 in Los Angeles Unified where administrators and parents are scrambling to cope with the loss of Title I money. The extra hundreds of thousands of dollars have allowed the cash-strapped schools to hire tutors, librarians, counselors and other staff who work to improve the academic success of not only low-income kids, but others at risk of failing.

"It will be difficult," said Ibia Gomez, principal at Nestle Elementary in Tarzana, which will lose about $100,000. "The money was paying for an intervention teacher, who provides tutoring during the day, and for teachers' aides.

"The TA's are really important," she added. "By supporting the teachers, they're supporting the students." The school board's decision was prompted by a projected drop in Title I money for next year - as much as 10 percent from the $342million received for 2011-12, officials say.

Federal law mandates that first priority for Title I money be given to schools with a poverty level topping 75 percent. Within that framework, LAUSD has established a system that this year allocated $687 for each student attending a school with a poverty level exceeding 65 percent and $472 per student at campuses with low-income levels of 40 to 64.99 percent.

With an estimated 90 percent of LAUSD students attending a school in the 65 percent poverty category, the board raised that bottom threshold to 50 percent in order to protect the district's poorest communities.

"This is a compensatory program for the highest number of kids affected," said Richard Vladovic, one of six school board members to vote for the change. "If we water it down, then we can't help anyone ... There's not enough money to go around, so I have to get the most bang."

But board member Tamar Galatzan, who voted against the change, said several Valley campuses just missed the cutoff and will lose much-needed funding.

Knollwood Elementary in Granada Hills, for instance, has a poverty rate of 48.2 percent; and Nestle Elementary serves an estimated 47.51 percent of students who are impoverished.

SOCES - which as a magnet school is part of the district's desegregation program - estimates that 49.07 percent of the 2,100 fourth- through 12th-graders are low income.

"This money matters to these schools - it's a matter of life and death," said Galatzan, who represents the Central and West Valley. "These schools aren't in communities where they can raise an extra $100,000 from parents. The ones who are employed are living paycheck to paycheck."

Bria Didszun, the PTA president at Nestle Elementary, said her group raised about $30,000 last year to pay for technology upgrades, campus remodeling projects and field trips for children. Now, the group will not only be working to make up the loss of $100,000 in Title I money, but will probably have to put those type of "extra" projects on hold.

"It's a double-edge sword," Didszun said. "Nearly half of the school is made up of hardworking, low-income parents, who can't afford to pledge more or purchase more of the fundraising items, so the other half of the parents will be tapped to make up the difference."

Millikan Middle School Principal John Plevack said the Title I money his campus received paid the salaries of a dean, a librarian, two teachers, three days of a school nurse and a computer tech - "a guy who's keeping our computers going with paper clips and duct tape."

He's looking at his options, but knows he'll have to rely more heavily on the PTA at Millikan, a magnet school in Sherman Oaks where slightly more than 42 percent of the kids are low-income.

She expressed frustration with the school board and its attitude that Valley schools are not sufficiently deserving or that parents have cash to spare.

"It's obvious they're out of touch," said Landsburg, a single, working mom with three children. "They need to come and walk around our schools."

Not a `poverty lottery'

Parents also are upset that there was no advance notice that the board was even considering a guideline change. They said not every low-income parent actually applied for the free or reduced-price meals, which may have kept their school from hitting the 50 percent threshold.

"It's very hard to get families who live far away to submit the documents," said Dina Lipton, vice president of the SOCES PTA. "I talked to some who didn't want to apply for the meal program. They said they could make their kids' lunches and didn't want to take the money away from someone who really needed it."

Superintendent John Deasy, however, dismissed that argument, saying the federal program was designed to serve schools with the greatest need.

"We want to help every youth in poverty," he said in an interview. "But this isn't a poverty lottery."

Jane Poole, president of the nonprofit SOCES Booster Club - which, ironically, buys meals and snacks for youngsters in the Title I tutoring program - spent Thursday morning meeting with other advocates, drafting a "call to action."

The group is launching an online petition and plans to lobby officials to restore the previous Title I guidelines.

"This is killing our kids' future and their dreams," she said. "This is for our kids." 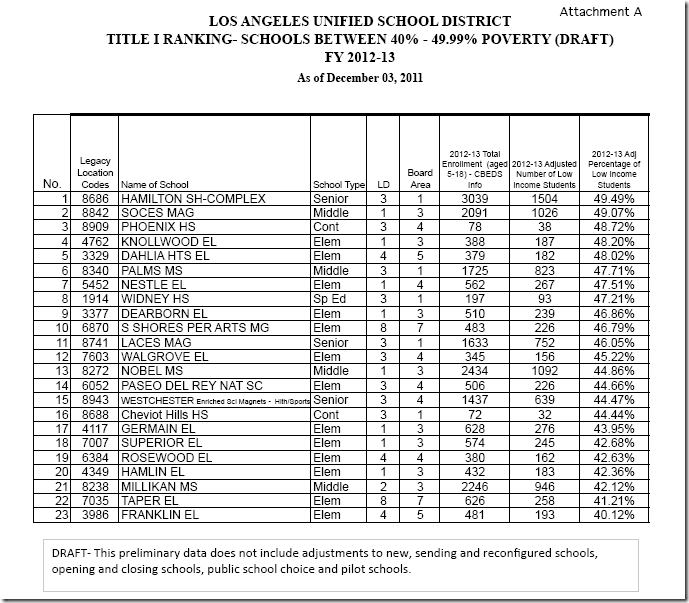