HOW TO RESCUE EDUCATION REFORM 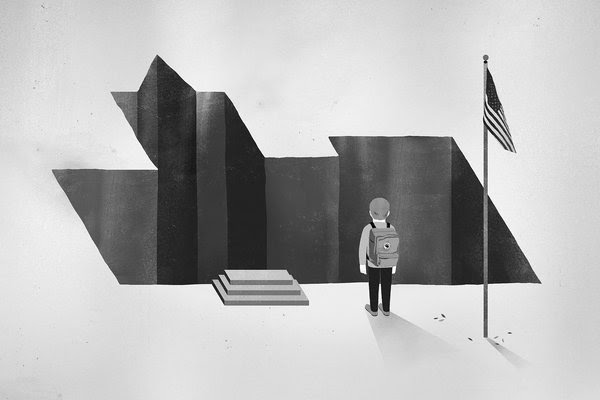 December 6, 2011/page A29 of the New York edition :: THE debate over renewing No Child Left Behind, the education reform act that will be 10 years old in January, has fallen along partisan lines even though school improvement is one of the few examples of bipartisan cooperation over the last decade.

Though the law was initiated and signed by a Republican president, presidential candidates like Mitt Romney and Rick Perry, who once supported it, now talk about getting the federal government out of education, echoing Tea Party members who deem federal involvement a constitutional travesty. Democratic reformers, meanwhile, insist that the federal government has a role in telling states how to identify, punish and fix low-performing schools — despite little evidence that Washington has been good at any of these tasks. To existing mandates, they would add heavy-handed, unproven teacher-evaluation requirements that could stifle innovative teaching and school design.

We sorely need a smarter, more coherent vision of the federal role in K-12 education. Yet both parties find themselves hemmed in. Republicans are stuck debating whether, rather than how, the federal government ought to be involved in education, while Democrats are squeezed between superintendents, school boards and teachers’ unions that want money with no strings, and activists with little patience for concerns about federal overreach.

When it comes to education policy, the two of us represent different schools of thought. One of us, Linda Darling-Hammond, is an education school professor who advised the Obama administration’s transition team; the other, Rick Hess, has been a critic of school districts and schools of education. We disagree on much, including big issues like merit pay for teachers and the best strategies for school choice.

We agree, though, on what the federal government can do well. It should not micromanage schools, but should focus on the four functions it alone can perform.

First is encouraging transparency for school performance and spending. For all its flaws, No Child Left Behind’s main contribution is that it pushed states to measure and report achievement for all students annually. Without transparency, it’s tough for parents, voters and taxpayers to hold schools and public officials accountable. However, No Child Left Behind also let states use statistical gimmicks to report performance. Instead of the vague mandate of “adequate yearly progress,” federal financing should be conditioned on truth in advertising — on reliably describing achievement (or lack thereof) and spending. To track achievement, states should be required to link their assessments to the National Assessment of Educational Progress (or to adopt a similar multistate assessment). To shed light on equity and cost-effectiveness, states should be required to report school- and district-level spending; the resources students receive should be disclosed, not only their achievement.

Second is ensuring that basic constitutional protections are respected.  No Child Left Behind required states to “disaggregate” assessment results to illuminate how disadvantaged or vulnerable populations — like black and Hispanic students and children from poor families — were doing.  Enforcing civil rights laws and ensuring that dollars intended for low-income students and students with disabilities are spent accordingly have been parts of the Education Department’s mandate since its creation in 1979. But efforts to reduce inequities have too often led to onerous and counterproductive micromanagement.

Third is supporting basic research. While the private market can produce applied research that can be put to profitable use, it tends to underinvest in research that asks fundamental questions. When it comes to brain science, language acquisition or the impact of computer-assisted tutoring, federal financing for reliable research is essential.

Finally, there is value in voluntary, competitive federal grants that support innovation while providing political cover for school boards, union leaders and others to throw off anachronistic routines. The Obama administration’s $4.35 billion Race to the Top competition tried to do some of this, but it ended up demanding that winning states hire consultants to comply with a 19-point federal agenda, rather than truly innovate.

Beyond this list, the federal government is simply not well situated to make schools and teachers improve — no matter how much ambitious reformers wish it were otherwise. Under our system, dictates from Congress turn into gobbledygook as they travel from the Education Department to state education agencies and then to local school districts. Educators end up caught in a morass of prescriptions and prohibitions, bled of the initiative and energy that characterize effective schools.

The federal government can make states, localities and schools do things — but not necessarily do them well. Since decades of research make it clear that what matters for evaluating employees or turning around schools is how well you do it — rather than whether you do it a certain way — it’s not surprising that well-intentioned demands for “bold” federal action on school improvement have a history of misfiring. They stifle problem-solving, encourage bureaucratic blame avoidance and often do more harm than good.

Perhaps No Child Left Behind’s most enduring lesson is the value of humility — a virtue that must be taken to heart in crafting a smarter, more coherent federal role in schooling.

Frederick M. Hess is director of education policy studies at the American Enterprise Institute. Linda Darling-Hammond is a professor of education at Stanford.