ARE BAD SCHOOLS IMMORTAL?: Fordham study shows the scarcity of turnarounds and shutdowns in both charter and district sectors

72% percent of the original low-performing charters remained in operation—and remained low-performing—five years later. So did 80% of district schools. Read on to learn more—including results from the ten states

Fixing chronically failing schools is one of the Obama administration’s central education goals, and charter schools have been asked to play a pivotal role in this reform agenda. In principle, charter schools are subject to greater results-based accountability in exchange for wide-ranging operational autonomy. One might, therefore, expect the charter sector to have a better track record of eliminating low-performing schools because they either improve or shut down. But does this really happen?

This study investigates the successes of the charter and district sectors in eliminating bad schools via dramatic turnarounds in performance and/or shutdowns. It identified 2,025 low-performing charter and district schools across ten states, each of which is home to a sizable number of charter schools.

These particular schools were tracked from 2003-04 through 2008-09 to determine how many turned around, shut down, or remained low-performing.

What did results show? A dismal state of affairs. In all ten states, the charter sector has done a slightly better job of eliminating low-performing schools, but neither sector has cause for celebration

Few low-performing schools in either sector—barely 1 percent—managed to dramatically improve their academic performance over this five-year period, and fewer than 10 percent made even moderate gains. Charter schools were not statistically more or less likely to turn around than their district peers.

To the extent that this study yields any good news, it is this (and it is modest): In all ten states, low-performing charter schools were likelier to close than were low-performing district schools. Nineteen percent of weak charters were shuttered, versus 11 percent of district low performers. And in both sectors, the majority of schools that closed were lower-performing than their neighboring schools; thus, students leaving closed schools had better academic options nearby.

We conclude that it is easier to close a low-performing school than to turn one around. Rather than pushing dubious turnaround efforts, charter authorizers and education policy makers alike should ramp up their efforts to close bad schools, particularly in cases where higher-performing schools are nearby. 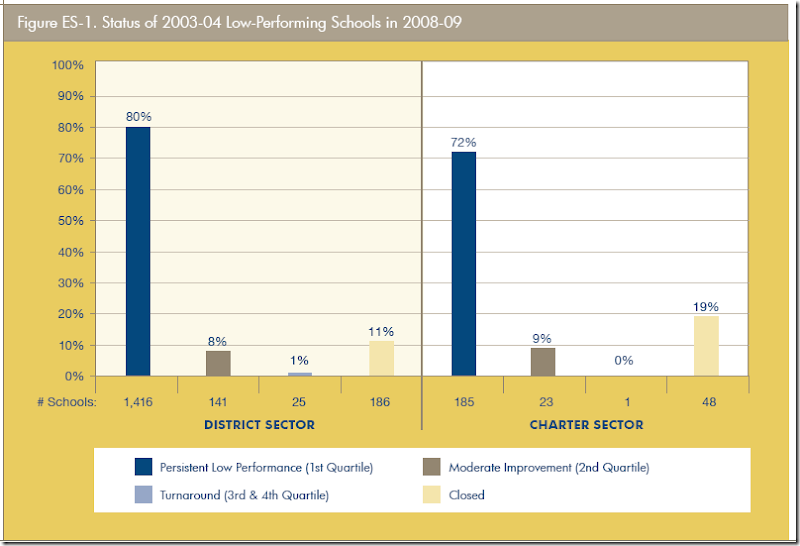 Fordham Study: ARE BAD SCHOOLS IMMORTAL?
Posted by smf at 11:37 AM