1. For the next three years, including PSC 3.0, 4.0, and 5.0 schools, only in-District applicants (no charters) can apply under Public School Choice for Focus (existing) and new schools, nor can the District take any other action to give a District school to a charter operator (e.g. Jordan HS).

2. UTLA can unilaterally opt out of the agreement if the District violates the above provision.

3. For the next three years, no school can be reconstituted/restructured if it demonstrates “reasonably progress toward overall improvement.”

2. UTLA, AALA, and the District will provide continuing assistance to ensure that school plans will be accepted by the Superintendent as “high quality” (based on clear criteria with UTLA and AALA consulted).

1. All LAUSD elementary, middle, span, and high schools will be eligible to select, if so desired, an alternative governance model, including ESBMM, Pilot, or Local Initiative School (LIS) model (described below), phased in as follows:

2. UTLA and the District will provide jointly developed training to all interested schools on the different governance models before the selection process begins.

3. A Local Options Oversight Committee – composed of UTLA, AALA, and District representatives – will develop the training programs on the governance models and resolve conflicts arising from the design, adoption, and implementation of school plans.

1. The MOU creates this new LIS governance model which gives schools, after training, the option to create – by a 60% secret ballot vote of the faculty with the principal’s concurrence – a package of “automatic waivers” (no District or UTLA approval required), which could include autonomy over curriculum; instruction; assessments (includingperiodic assessments); daily schedules; internal school organization (including small learning communities); professional development; budget; staff selection (including the principal); teacher assignments to grade levels, departments etc.; local selection of department chairs, coordinators, deans, etc.; student discipline; and health and safety.

2. Between November 15 and March 1 of each school year, interested schools develop proposals, including their Single Plan, and a petition identifying the automatic waivers desired which must be signed by a majority of the school faculty with the principal’s concurrence, followed by more meetings and discussion.

1. New school principal selected by a Personnel Team mainly from the relieved schools with teachers selected by Design Team. Superintendent must concur but cannot impose.

2. Design teams will select up to 50% of the PSC new school’s faculty. The other 50% will be chosen through a collaborative process following the UTLA-LAUSD CBA, Article XI, Section 16.0.

3. Faculty wishing to work at the new school must sign a jointly developed commitment to the plan. Those wishing to leave after one year could transfer without harm. The principal retains right to transfer teachers under the contract.

4. PSC 3.0 new schools will choose governance model in first year of implementation (2012-13) when fully staffed. In meantime, they will submit only instructional plans (without governance) and will open with automatic waivers , if desired, described above for LIS model, but not including teacher assignments or local selection.

5. Plans for new schools must be accepted by the Superintendent as “high quality.” If still not high quality after Superintendent recommends changes, then UTLA, AALA, and District work with school to write the plan.

6. A panel consisting of UTLA, AALA, and District designated experts will make recommendations on all PSC plans submitted.

7. Plans will be given back to design teams and given until mid-late January to make changes based on this agreement, if approved by UTLA and the Board of Education.

8. PSC 3.0 Focus schools have the option to choose their governance now if the required vote of faculty is taken or postpone until spring of 2012 after training.

2. UTLA withdraws PERB cases regarding Jordan and Clay that are not legally compelling (UTLA’s court case against the District for the Clay/Jordan giveaways remains in play). 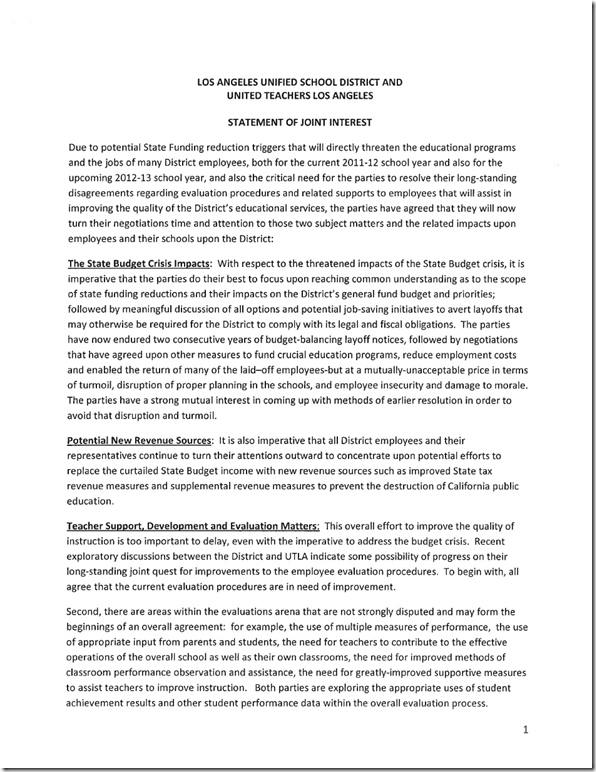 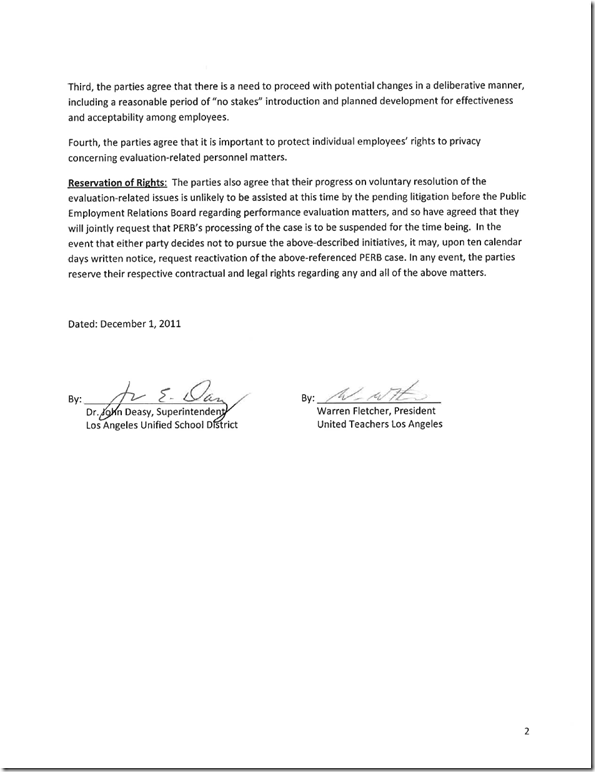 LAUSD/UTLA LOCAL SCHOOL STABILIZATION AND EMPOWERMENT INITIATIVE OF 2011
Posted by smf at 5:49 PM