Mayoral Control in NYC as seen by the NYT: THE BRIEF LIFE AND IMPENDING DEATH OF A BOARD OF EDUCATION 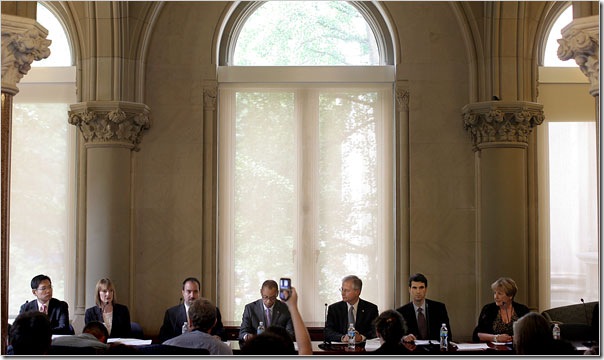 It was not that there were no accomplishments. In fact, few other government committees could boast of such efficiency.

In the board’s 38 days, it has held one meeting, on July 1, which lasted for all of nine minutes. Packed with three deputy mayors and other allies of Mr. Bloomberg, the board of seven passed two resolutions — both to stunning effect.

First, it called on Chancellor Joel I. Klein to stay put, giving him all the power needed to run the school system: “including, but not limited to, authority to award and execute all contracts, without restrictions to dollar amount or purpose,” as the resolution stated it.

Its second action was to urge the State Senate to “immediately” pass a bill to renew the mayor’s control over city schools.

Swiftly enough, for Albany at least, the Senate heeded, overwhelmingly approving the law on Thursday.

Historians may debate for years whether the board’s resolution shamed senators into action. But the vote, which followed Assembly approval of the bill in June, put the Board of Education, once again, out of business.

The original Board of Education, which ruled city schools for more than 30 years, was disbanded in 2002 when the Legislature gave that power to the mayor for seven years. But when the Senate was unable to pass a renewal bill by June 30, the Board of Education was resurrected.

Board members on Friday seemed rather sanguine at the prospect of losing posts they had held for less than six weeks. (Officially, they will not be unseated until the governor signs the legislation.)

“I will have a minor little blurb in history books, and that’s O.K.,” said Carlo Scissura, the chief of staff for the Brooklyn borough president, Marty Markowitz, who appointed him to the board on July 1.

Mr. Scissura — and the other board members — did not let power go to their heads. They agreed early on to do nothing and take most of the summer off and meet again in September.

On Friday, Mayor Michael R. Bloomberg praised the board members during a radio program on WOR.

He said that Dennis M. Walcott of Queens, who was elected the board president, “insisted that I call him El Presidente.”

“We had a great board for the Board of Education,” Mr. Bloomberg said. “It’s just not the right structure long-term, so we’re back.”

Through a spokesman on Friday, the three deputy mayors on the board said that they had been “happy to sit in,” but were “happier that the State Senate has re-eliminated the board.”

All of the board members volunteered to forgo the $15,000 stipends, personal drivers and assistants they were entitled to. There were never even business cards nor Board of Education embossed stationery.

“My biggest accomplishment was being there to serve when the function was nee ded,” said Jimmy Yan, the general counsel for the Manhattan borough president, Scott M. Stringer, who named him to the board. “I tried to be as diligent as I could.”