EPA BEGINS MONITORING AROUND GARY, INDIANA SCHOOL … AND A LAUSD SCHOOL TOO! Samples will measure pollution to understand health effects on children.

The move is an effort to understand whether toxic air pollution poses health concerns to school children.

In Gary, the EPA will keep an eye on metal particles, volatile organic compounds and polycyclic aromatic hydrocarbons, which can can cause cancer if breathed over long periods.

Samples will be taken over 60 days and be analyzed for air toxics of potential concern. They will be used to assess the potential for long-term health impacts and to evaluate actions that might be needed to reduce the level of pollution. EPA said it will also use the results to "take action as needed to ensure that nearby industries are in compliance with Clean Air regulations."

A newspaper analysis in December concluded there are high levels of manganese in the air around Jefferson Elementary, which mainly comes from ArcelorMittal steel mills in East Chicago.

In addition to Jefferson Elementary on Jackson Street, Abraham Lincoln Elementary on East 135th Street in East Chicago is also among 62 schools in 22 states that will be monitored for toxics.

The schools were selected based on results from EPA's National Air Toxics Assessment and a newspaper report about toxic air pollution near schools.

Once available, the monitoring data can be accessed by choosing Jefferson Elementary from this list: www.epa.gov /schoolair/schools.html

smf: three Southern California schools are on the project list: 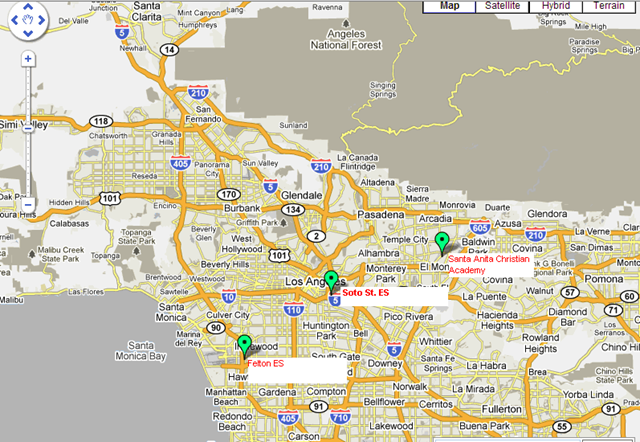 Pollutants to be monitored at Soto St. Elementary : Metals in TSP, PAH, VOCs