AUGUST 17, 2009 --  Public schools in the U.S. have added professional marketing to their back-to-school shopping lists.

Financially struggling urban districts are trying to win back students fleeing to charter schools, private schools and suburban districts that offer open enrollment. Administrators say they are working hard to improve academics -- but it can't hurt to burnish their image as well. 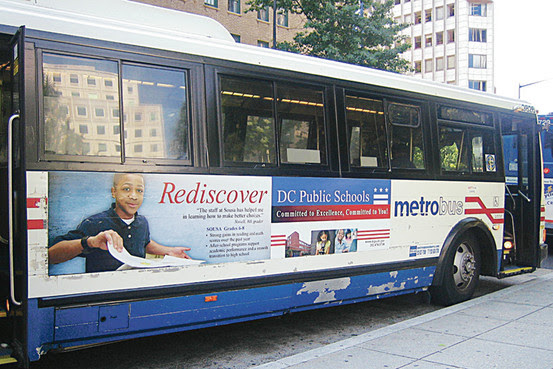 A bus in Washington, D.C., carries an ad for the city's public schools, which have seen enrollment plunge from nearly 150,000 students in 1970 to less than 50,000 last year. The district spent $100,000 this spring on a campaign that also included radio spots in an effort to win back students who have left public schools. The ads include quotes from students who say they are glad they stayed in public school. Stephanie Simon/The Wall Street Journal

So they are recording radio ads, filming TV infomercials and buying address lists for direct-mail campaigns. Other efforts, by both districts and individual schools, call for catering Mexican dinners for potential students, making sales pitches at churches and hiring branding experts to redesign logos.

"Schools are really getting that they can't just expect students to show up any more," said Lisa Relou, who directs marketing efforts for the Denver Public Schools. "They have to go out and recruit."

Administrators working on the public-relations push say the potential returns are high. State funding for public schools is based on attendance, so each new student brings more money, typically $5,000 to $8,000 per head. In addition, schools with small enrollments are at constant risk of being shuttered in this recession, and full classrooms help.

"They think like educators. They like to explain things in lots of detail," said Christy Lui, who works with schools through her firm Marketing On Demand, based in Oconomowoc, Wis. "They have to learn to think more like businesses."

Not all corporate strategies translate. In the business world, it's fair game to knock a rival, but when a Denver charter school put out fliers comparing its superior graduation rate to that of nearby public schools, tempers flared. The superintendent of Denver Public Schools pleaded for a halt to "negative campaigning" and the charter school pulled the flier.

Charter schools are technically part of the public system in Denver, as in most cities. But they are run independently, with control over their own budgets. To ease the tension sparked by the fliers, the superintendent called in an educational consultant to draft a code of conduct for ethical school marketing. The resulting truce allows for comparisons of graduation rates, test scores and the like. "So long as it's truthful, they can use it," said Amy Slothower, the consultant.

If sharp elbows are one peril for schools, sounding desperate is another.

KIPP Academies, a national network of charter schools, tried TV ads but yanked them for fear that parents might question "the quality of a school when they see it marketed like a used car," said Steve Mancini, a KIPP spokesman. KIPP found better success sending staff door to door in neighborhood to hand out fliers and talk to parents.

Most public schools don't have the resources for that kind of one-on-one marketing. Instead, they are experimenting with mass media.

The Washington, D.C., district spent $100,000 on a campaign that included radio spots and bus ads. The district's enrollment has plunged from nearly 150,000 in 1970 to less than 50,000 last year. To lure students, the ads include quotes from students who say they are glad they stayed in public school.

"We wanted to show the city that there are smiling, happy kids in D.C. public schools," said Jennifer Calloway, a district spokeswoman.

In Pittsburgh, where enrollment has dropped about 25% in the past decade, yard signs along a marathon course this spring touted a pledge by city officials to give full college scholarships to all qualified graduates of city schools. This fall, that message will be carried by $1.5 million of donated advertising space and media airtime.

The TV spots will combine the scholarship pledge with news of recent district achievements, like last week's announcement that Pittsburgh schools met federal benchmarks for academic improvement for the first time.

"We are counting on it to be irresistible," said Saleem Ghubril, who runs the promotional campaign.

The cost of public-school marketing efforts varies widely, from a few thousand dollars to more than $1 million. That has raised eyebrows in a few cities, especially when the public schools are making big cuts to balance their budgets.

"If we don't want our schools to look bad, we need to tackle the real issues -- instructing our children, nurturing them, graduating them -- instead of just putting a papier-mâché facade over the problems," said Anna Alicia Romero, who belongs to a parent advocacy group in San Antonio.

Ms. Romero has three children in the San Antonio Independent School District, where enrollment has fallen 25% over the past decade. The district recently signed a $180,000 contract with a marketing firm that has done work for grocery chains, a swanky hotel and Eye Care Centers of America. The marketing plan calls for radio spots, billboards, Twitter feeds, online banner ads and promotional videos on YouTube.

"Most public schools have a negative image," said James Howard, president of the school board. "We're hoping that image can be changed."

Perhaps the boldest marketing push is in St. Louis. The urban district's enrollment has plunged 40% in the past decade because of students moving to charter schools and suburban districts. The school district has been through eight superintendents in 10 years and lost its state accreditation. It faces a $53 million deficit and recently closed 14 schools.

But administrators have set aside $1 million for pay for publicity that may include bragging about a top-ranked high school and magnet programs in culinary arts, aeronautics and international studies.

A marketing firm will spend the next two months asking residents, "What would it take to get you to send your children to school here?" said Patrick Wallace, a district spokesman.

●●smf's 2¢:  I'm not sure how well business models translate to public education …but I'm pretty sure the best strategy isn't for the Board of Ed to just give up and give schools away to the competition.