IT'S A CHARTER YEAR AND A NEW FUTURE FOR BIRMINGHAM HIGH: The Valley campus begins the school year independent of L.A. Unified control. Charter supporters had to overcome numerous obstacles, including internal dissension, cash shortage and lawsuits. 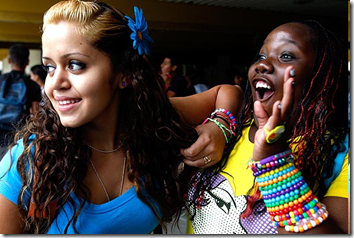 August 20, 2009 -- If there was a brick wall, they walked into it. If there was a land mine, they stepped on it. When the history of charter schools in the United States is written, Birmingham High School in the San Fernando Valley may stand as a cautionary tale of all that can go wrong when a regular public school tries to convert to an independent charter.

Yet despite all the obstacles -- despite a hostile teachers union and shattered friendships, despite a lawsuit and a last-minute financial meltdown -- Birmingham threw open its doors Wednesday as L.A.'s newest charter school.

"We made it!" exulted Rochelle Kronstadt, the school's college counselor and part of a core group of teachers and administrators who fought to pull the school away from the management of the Los Angeles Unified School District. "We're thrilled and we intend to make this the school to watch in Southern California."

Birmingham, now officially known as Birmingham Community Charter High School, has been a school to watch for some time -- and will continue to be as other L.A. Unified schools weigh their own bids to turn charter.

Charter schools are publicly financed schools that are run independently of traditional districts, usually by nonprofits. Freed from many of the bureaucratic restraints that bind traditional public schools, they are designed to be laboratories of innovation, and are at the forefront of school reform efforts being pushed by President Obama and Education Secretary Arne Duncan.

Simply by virtue of its size, Birmingham -- with about 2,700 students and the largest high school campus west of the Mississippi -- is a major prize for the charter movement. Jed Wallace, executive director of the California Charter Schools Assn., said he also sees it as a harbinger.

"I think it is the beginning of the second wave of conversions," Wallace said as he chatted with Principal Marcia Coates after an opening day ceremony. Other schools have sought his group's guidance as they consider following Birmingham's path, he said.

Under state law, a public school can convert to charter status with the support of a majority of teachers; at Birmingham, about two-thirds signed a petition late last year. But the minority who opposed it, and some supporters who later changed their minds, fought bitterly against the plans. They did secure an agreement to allow the Daniel Pearl Journalism Magnet, which had been a program within Birmingham High, to become a separate school on a portion of the campus. It will open when traditional Los Angeles Unified Schools begin Sept. 9.

Birmingham's mid-August opening was one of the few tangible signs of change. By starting early, Coates said, students will finish the fall semester -- and take finals -- before winter break. And students will be closer to the end of classes and better prepared when they take Advanced Placement and other standardized exams in the spring.

Aside from that and a new, private food contractor (which gave away free snacks, including sliders and Lucky Charms cereal), most of the changes being discussed at Birmingham are transparent or in the future. These include new rules for student discipline and accountability; programs designed to make Birmingham a bigger presence in the surrounding community; and an almost certain change in the union representing teachers, which for now remains United Teachers Los Angeles.

With a catchment area that includes both tough sections of Van Nuys and affluent parts of Encino, Birmingham is in some ways the quintessential Los Angeles school, with demographics and student performance that come close to mirroring the city as a whole. In standardized test scores released Tuesday, 34% of its students were rated "proficient" or better in English, down from 36% the year before. Math proficiency remained unchanged at 9%. (Those figures do not include the higher performing magnet program.)

Although school leaders speak ambitiously of raising scores, charter status has proved to be no panacea. The last L.A. Unified high school to convert, Locke High, barely budged from the year before. Yvonne Chan, a state Board of Education member who runs the Vaughn Next Century Learning Center charter in Pacoima, said the task for Coates is to "take this huge, potential Titanic and keep it not only afloat but set it in the right direction." And that, she said, "is not that easy."

Of the non-magnet teachers at Birmingham last year, 91 chose to stay and 34 decided to seek jobs elsewhere in L.A. Unified, Coates said. While some departments have barely changed, others -- especially science, Spanish and history -- were gutted by the departures.

"We don't trust the administration," said veteran physics teacher Myrna Fleming, who took a job at the APEX Academy, a program for at-risk youth within Helen Bernstein High School in Hollywood. "There are a lot of bad feelings."

Alby Dye, a Salvadoran-born Spanish teacher, said she was among a number of Latino teachers who left in part because they saw the charter backers as biased against the school's Latino student majority.

"I was one of the teachers who initially supported the charter movement," said Dye, who has not yet found another job. What drove her out, she said, "is the quality of people within the movement in this school."

The charter advocates denied the allegation.

Virginia Witherow, the remaining Spanish department chairwoman, said she was offended by accusations of racism.

The festive atmosphere came against a backdrop of challenges, chief among them the loss of a $5-million loan that was supposed to tide the school over until public funds arrive in October. According to Coates, Birmingham had an agreement with Charter School Capital, which specializes in financing for charter schools, but the lender backed out after the district was sued last month by a group of former school employees who demanded that the charter be overturned. Ironically, one of the plaintiffs' arguments was that the school had not demonstrated that it had fully secured the loan, but had merely received a pre-qualification letter.

That is true, according to Anita Landecker, who assisted Birmingham in her position as executive director of ExEd, a nonprofit that provides back-office services for charters. "Charter School Capital didn't want to sign a contract until the charter was approved," Landecker said.

Desperate for cash, Coates turned to Los Angeles Unified, which faces a money crunch of its own. Cortines agreed to lend the school $3 million -- if the school first resolves a dispute with the magnet over classroom space.

Coates said Birmingham's new governing board would take up the offer, but would continue to look for alternative funding.

In addition to the cash problems, Birmingham faces a probe by L.A. Unified's inspector general, Jerry Thornton. Thornton declined to say what he was investigating, but Coates said it concerned allegations that some teachers were receiving excessive salaries, chief among them Athletic Director Rick Prizant, a charter supporter.

If Coates needed any more reminders of the tough job she faces as principal, she got it when she began the opening ceremony by asking assembled students, "Are you guys excited?" The response came in a lackluster chorus: "No!" Undeterred, Coates said, "Not about the first day of school -- about the charter!" The no's grew louder. Coates, who has been Birmingham's principal since 2005, shrugged it off.

Still, some students seemed intrigued by the school's new status.

"At first, I was just like thinking, 'How's it going to be different?' " said junior Jennifer Romero, 17. "But now that I'm getting the hang of it . . . I'm pretty excited about the school year. I'm pretty sure it's going to be good."