NEW ORLEANS — The devastation of Hurricane Katrina four years ago brought with it many changes for this city, but perhaps its most enduring mark may be the new charter school system that came cascading in during the storm's aftermath.

Take, for instance, the students at Langston Hughes Academy. Once struggling to meet state testing standards, they're getting a lot of help to try and do better. Their learning environment has changed to one with electronic blackboards and teachers hailing from Ivy League schools.

"There are higher expectations now and no excuses," said John Alford, the Harvard-trained leader of the school. "Kids are starting to see college more as a reality, a real option." 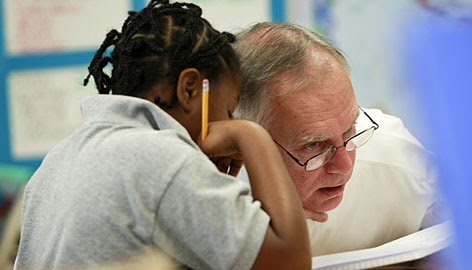 Langston Hughes Academy is one of 52 charter schools operating in New Orleans, which also has 37 traditionally run schools. Nearly 60% of the city's public school students attend charter schools — the highest percentage of any American city. School district officials hope to raise that percentage to 75% in the coming years.

New Orleans' school district's performance score — a tally of test scores and other performance measures — jumped from 56.9 pre-Katrina to 66.4 last year, according to state Department of Education figures. Statewide, the average during that same period stayed roughly the same: 87.4 pre-Katrina and 87.2 last year.

The numbers suggest the city still has some catching up to do with the rest of the state. Determining how New Orleans stacks up with the rest of the nation is difficult to assess since the tests are particular to Louisiana and comparisons cannot be reliably made with similar tests in other states.

Even so, the revamping of New Orleans schools, some of the worst-performing in the nation pre-Katrina, is catching the attention of educators nationwide, said Tony Miller, deputy secretary of the U.S. Department of Education. "If these types of practices can be taken across the country, especially in some of the more challenging urban environments, that would make a difference in improving education," Miller said during a recent visit to New Orleans. "You're seeing some of those results here."

Charter schools are public schools that use a mix of taxpayer funds and privately raised dollars to run their schools, said Paul Vallas, superintendent of the Recovery School District, which took over the city's worst-performing and flood-wrecked schools. They're free and open to all students but are independently managed by individuals or corporations. They run much the way businesses are: competing for students, top teachers and fundraising dollars.

They differ from traditionally run schools in that they have the autonomy to hire and fire staff and set their own curriculum without school board approval. Charters also have longer school years — almost 11 months — and longer days than traditional schools.

Charter schools' business models, and competition between themselves, don't allow for the sharing of successful techniques throughout the district, said Larry Carter, president of the United Teachers of New Orleans, the local union.

"There's no replication of programs that are successful," Carter said. "I don't want to see schools closing year after year because their business models don't work."

Luis Mirón, director of the Loyola Institute for Quality and Equity in Education at Loyola University, said the success of what he called the "charter surge" has been based on temporary measures — a recovery school district that will eventually return schools to the Orleans Parish School Board and millions in federal recovery dollars, he said.

"It's been extraordinary as far as student achievement," said Mirón, who is also dean of Loyola's College of Social Sciences. "The question is: After the recovery money runs out, how do you sustain that reform?"

Many charter school leaders say they're in for the long haul. Ben Kleban, another Harvard-trained educator, traded a rising career as a financial planner for Boeing to get into the charter school business. Today, he runs the New Orleans College Prep charter school in the Central City neighborhood.

Each morning, nine buses shuttle 460 students to the school from all corners of the parish. That's a rise in attendance from 100 students two years ago.

On a recent afternoon, Kleban inspected a quiet line of uniformed kindergarteners exiting the cafeteria after lunch, pointing out how every shirt was tucked in and every shoe the same color.

"They're professionals," Kleban, 29, said of the students. "You don't see that in every public school you walk into."

Charters began sprouting in New Orleans when the traditional school system was in tatters, said Jeanne Allen, president of the pro-charter Center for Education Reform in Washington.

Charter schools take away politics, she said. Hiring teachers, for instance, can be done without unions or school boards, Allen said.