WHO WOULDA THUNK IT?: BOOMERS ARE RETIRING! NYT:Report Envisions Shortage of Teachers as Retirements Escalate + USAToday: A 'tsunami' of Boomer teacher retirements is on the horizon

April 7, 2009 -- Over the next four years, more than a third of the nation’s 3.2 million teachers could retire, depriving classrooms of experienced instructors and straining taxpayer-financed retirement systems, according to a new report.

The problem is aggravated by high attrition among rookie teachers, with one of every three new teachers leaving the profession within five years, a loss of talent that costs school districts millions in recruiting and training expenses, says the report, by the National Commission on Teaching and America’s Future, a nonprofit research advocacy group.

“The traditional teaching career is collapsing at both ends,” the report says. “Beginners are being driven away” by low pay and frustrating working conditions, and “accomplished veterans who still have much to contribute are being separated from their schools by obsolete retirement systems” that encourage teachers to move from paycheck to pension when they are still in their mid-50s, the report says.

To ease the exodus, the report says, policy makers should restructure schools and modify state retirement policies so that thousands of the best veteran teachers can stay on in the classroom to mentor inexperienced teachers. Reorganizing schools around what the report calls learning teams, a model already in place in some schools in Boston, could ease the strain on pension systems, raise student achievement and help young teachers survive their first, often traumatic years in the classroom, it says.

“In the ’60s we recruited many baby-boom women and men, and the deal we made was, ‘You’ll have a rewarding career and at the end, pension and health benefits,’ ” said Tom Carroll, the commission’s president. “They signed up in large numbers and stayed, and now 53 percent of our teaching work force is getting ready to collect. If all those boomers walk into retirement, our teacher pension systems will be under severe strain, with the same problems as the auto industry.”

This is not the first report to predict widespread teacher shortages unless policy makers took quick action. In 1999, an Education Department study warned that the impending retirement of millions of teachers could lead to chaos, a dire outcome that never materialized.

One economist who spoke out skeptically then was Michael Podgursky, who studies teacher retirement at the University of Missouri. The latest report, too, may overstate the case somewhat, Dr. Podgursky said in an interview. “There’s a bit of hyperbole” in the assertion that the teaching career is “collapsing at both ends,” he said.

The recession may help ease potential teacher shortages because the profession’s relative job security and generous health benefits will probably attract more new college graduates and career-changers than when plenty of good jobs were available.

“Still, the authors make a credible case that the number or teachers who retire will rise in coming years,” Dr. Podgursky said, “and it makes a good deal of sense to develop phased retirement systems that permit retired or semiretired teachers to mentor new teachers.”

A 'tsunami' of Boomer teacher retirements is on the horizon 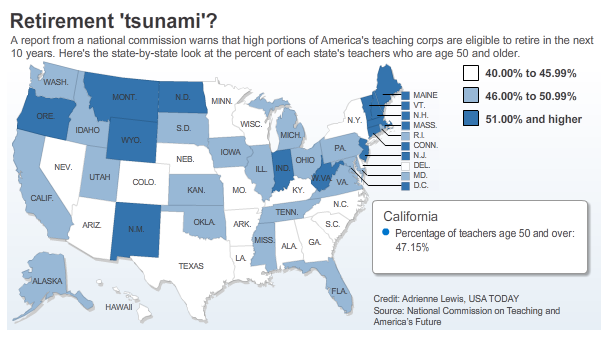 7 April -- More than half the nation's teachers are Baby Boomers ages 50 and older and eligible for retirement over the next decade, a report says today. It warns that a retirement "tsunami" could rob schools of valuable experience.

The report by the National Commission on Teaching and America's Future calls for school administrators to take immediate action to lower attrition rates and establish programs that pass along valuable information from teaching veterans to new teachers.

"We face a tsunami in the shift of the future of the teachers' workforce," says Tom Carroll, president of the commission, who co-wrote the report. "Over the next five or six years, we could lose over a third of our teachers."

Co-author and director of strategic initiatives Elizabeth Foster agrees: "Whether this big retirement tsunami hits in the next two or three years, or whether the economy keeps them around for a little bit longer, it's coming."

Exacerbating the problem are low retention rates for young teachers: A sufficient number of teachers are recruited at colleges and universities, but many leave the field within five years, Carroll says. "We're trying to fill a bucket with a hole in the bottom, and we have been for decades," he says.

Dan Domenech, executive director for the American Association of School Administrators, says that although Boomer retirements mean a loss of experience, the recession is actually a silver lining. Retirement of higher-paid teaching veterans could help save younger teachers' jobs, and stimulus package money could create training programs, he says.

"If there were no other factors involved, it would be — wow, bad news," he says. The situation is still not great, he says, But with the recession and stimulus funding, "it won't have as adverse an impact."

The report combines statistics from the National Center for Education Statistics with an Internet survey of 400 teachers and 95 principals in November.

Over the next year, the National Commission on Teaching and America's Future will host retreats for school administrators looking to combat the problem, Foster says. More information is available at learningteams.org.

"We don't just want to come out and say: 'Here's bad news. Good luck,' " Carroll says. "We're saying, 'This could be bad news, but this could be an opportunity.' "